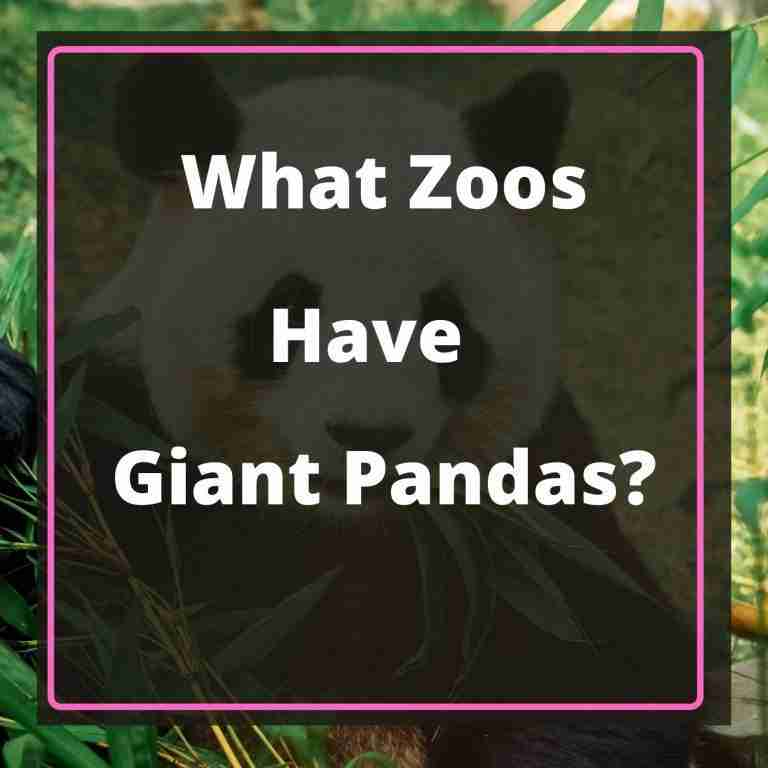 Looking at giant pandas playing in different zoos across the world creates an interesting sight. Most times, these panda bears sleep and eat all day, but they are good at swimming, climbing, and rolling around. As a panda lover, you’ll possibly want to know, what zoos have giant pandas?

Zoos that have giant pandas include the Chengdu Giant Panda Breeding Center, Beijing Zoo, and the Memphis Zoo. However, all these cute creatures were loaned from China and will be taken back there at a particular period. China’s goal for doing this is to involve other countries in preventing the giant pandas from going extinct.

Currently, I believe you have the information about zoos with giant pandas, but it is not enough. There’s a chance you may be thinking, what zoos have giant pandas in the US?

Get comfortable and prepare to gain more knowledge today!

What Zoos Have Giant Pandas In the US?

As of now, the National Zoo in Washington DC, the Memphis Zoo in Tennessee, and the Zoo Atlanta in California, all have giant pandas. These are the only three zoos with giant pandas in the United States. And they all have breeding programs that allow the female pandas to give birth to their young easily.

In 1972, the first set of giant pandas arrived at the National Zoological Park (National Zoo). Since then, this institute has been actively involved in studying the lifestyle, breeding, diseases, and reproductive life of giant pandas.

Not only that, they have been working together with other staff in China to achieve their goal of preserving the lives of giant pandas. And seriously, their effort is paying off because these panda bears are no longer endangered species!

Two giant pandas, Le Le and Ya Ya arrived at the Memphis Zoo, Tennessee in April 2003 from China. With this addition to the animal habitat, Memphis Zoo became one of the three zoos with giant pandas in the United States. So far, the zookeepers and scientists in the institute have been nothing but amazing in taking care of the giant pandas.

Founded in 1889, Zoo Atlanta is one of the institutions in the United States that have giant pandas. Yang Yang and Lun Lun were taken on loan from China to the facility in 1999. Fortunately, the male and female pandas had their first baby in 2006, the second cub in 2008, and the third in 2010.

Altogether, the adult pandas have had seven cubs as of 2016, which is possible as a result of Zoo Atlanta’s continuous effort. One extraordinary thing about Zoo Atlanta is that they experienced a setback in 1984, making them one of the worst Zoos. However, they bounced back in 2000 and were among the ten best zoos.

There are habitats for the giant pandas in the zoo and research is always being carried out concerning the large creatures.

What Zoos Have Giant Pandas In China?

Among the zoos that have giant pandas in China are the Chengdu Giant Panda Breeding Center, Wolong Panda Center, and Beijing Zoo.

Chengdu is the most popular place to see giant places and is often called the “hometown of giant pandas”. But keep in mind that many zoos in China have giant pandas.

As you know, China loans its giant pandas to other countries of the world. Whenever you see giant pandas in the USA, Malaysia, Japan, or Australia, note that they will be taken back to China sooner or later.

Here’s a brief fact about the zoos with giant pandas in China;

With just 6 giant pandas, the Chengdu Giant Panda Breeding Center began operation in 1987. Now, the facility has all the equipment that supports giant pandas’ breeding, feeding, health, and other comforts. Their goal is to be a popular research facility, educate people about conservation and make the facility a tourism center.

There are many giant pandas in the facility and the zookeepers are doing a great job in taking care of them. No wonder, the Chengdu Giant Panda Breeding Center is the most popular Zoo in China.

Without mentioning the Wolong Reserve as part of zoos with giant pandas, the list will not be complete. Being in operation since 1963, the zoo is among the most popular giant panda reserves in China. In 1980, the Panda reserve was on UNESCO Man and Biosphere Reserve Network.

Sadly, an earthquake happened in 2008 that damaged the panda habitat in the environment. Most pandas were taken to another location after this unfortunate event that affected on the zoo in many ways. Luckily, a new panda home was built by the Hong Kong Special Administrative Region and started operation in October 2012.

Compared to other zoos, the Wolong National Nature Reserve doesn’t cage its giant pandas. They allow the cute panda bears to walk around their environment as though they are in the wild. Like other panda centers, the facilities in the reserve allow the giant pandas to breed, play, feed and perform other activities easily.

No doubt, Beijing Zoo has the largest number of animals in China and is also among the best zoos in the world. Founded in 1906, the zoo houses uncommon creatures including the giant pandas. Located in Xicheng District, Beijing, China, the Beijing Zoo provides a comfortable and safe place for the giant pandas.

Surprisingly, the first giant panda to give birth in captivity was living in the Beijing Zoo as of 1963. Moreover, the facility is constantly contributing to the conservation of the giant pandas.

Other zoos that have giant pandas in China include Dujiangyan Panda Base, Ocean Park, Shanghai Zoo, Hangzhou Zoo, and Chongqing Zoo. Visitors and inhabitants often go to the zoos to watch the giant pandas eat bamboo, climb trees and play around.

Do Any Zoos Have Pandas?

Yes, but only about 26 Zoos in 21 countries including China have giant pandas as of 2019. Countries like Malaysia, Mexico, Netherlands, Japan, Singapore, South Korea, and others have giant pandas in some of their zoos.

Nevertheless, China has the highest number of zoos with giant pandas.

Adelaide Zoo in Australia, Zoo Aquarium in Spain, and Edinburgh Zoo in Scotland, are among the Zoos with giant pandas in the world. Other zoos include the Chapultepec Zoo in Mexico and the Dutch Zoo(Ouwehands Dierenpark) in the Netherlands.

Remember that all giant pandas come from China and will return to China. One major reason the country loans these panda bears to other countries is to ensure the animals’ population continues to increase. That’s why buying a giant panda is almost impossible because the Chinese care about the well-being of these animals.

Do Any UK Zoos Have Giant Pandas?

Yes, but only Edinburgh Zoo in the United Kingdom has giant pandas. Amazingly, this is the only zoo with giant pandas in the UK. In December 2011, Yang Guang and Tian Tian were taken to the UK from China on a 10-year loan.

Although the male and female giant pandas have not given birth to any cubs since 2011, they have been a source of entertainment to visitors. While in China, Tian Tian gave birth to two cubs in 2007 but hasn’t reproduced since then after many attempts. There is hope that the female panda will produce cubs because the institute is not giving up.

There’s a chance that the pandas will be taken back to China very soon.

Edinburgh Zoo, like other zoos with pandas, is actively working in preventing the giant pandas from going into extinction.

Now we’ve come to the end of this article. But before you go, here’s what you should always remember.

Several zoos across the world have panda bears. Some of them are the Chengdu Giant Panda Breeding Center in China, Zoo Atlanta in the US, and the Chapultepec Zoo in Mexico.

Only three Zoos have giant pandas in the United States and they are the Memphis Zoo, the National Zoo, and Zoo Atlanta.

China has the highest population of giant panda zoos. They include the popular Chengdu Giant Panda Breeding Center, the Wolong Panda Center, Being Zoo, and Ocean Park.

Finally, the only zoo with giant pandas in the United Kingdom is the Edinburgh Zoo.

Check out this Panda video cam to see giant pandas playing in different zoos across the world.