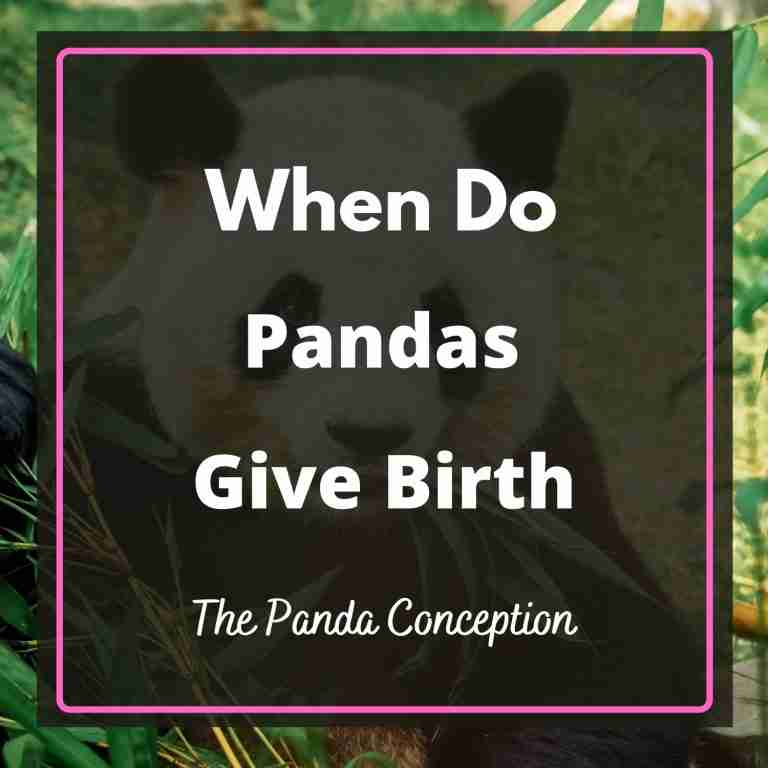 Pandas are among the most popular animals in terms of giving birth. Due to their rapidly declining population, experts are doing their best to save them from extinction. The same reason leads us to the question, when do pandas give birth?

Giant pandas usually give birth to their young in late summer (usually August). If you think that’s odd, I cannot blame you because it’s really fascinating. But what is the truth behind it?

By reading this article, you will have a better understanding of how pandas give birth and other related topics. Sounds interesting? Let’s get started.

When Is A Panda’s Mating Season?

The mating season of pandas happens during the spring (March to May). A female giant panda can get pregnant once a year for only 24 to 72 hours, although the mating season lasts for several months. Sounds strange, but it’s true.

The males compete with each other to get the females during the mating season. While they wait for the female panda to be ready, they chase and seduce her until it agrees to breed.

The competition is much greater when a male panda comes from the outside, as he has to fight with some pandas that are already engaged in sexual activity.

Panda pornography refers to the visual presentation (such as videos or motion pictures) showing mating pandas to stimulate sex drive among them. When stimulation does not work for pandas in captivity, experts resort to artificial insemination.

The main reason why they encourage mating among pandas is to improve their population since they were once considered endangered species. Good thing, through the efforts of different experts they are now vulnerable species.

To know more about the current conservation status of the giant pandas, open this link.

Where Do Pandas Usually Give Birth?

In the wild, they usually give birth in hollow trees or in natural dens. The den is usually found with branches, dry grass, and more that makes it look like a nest. On the other hand, they give birth inside a specified area within captivity or animal breeding centers.

Moreover, in zoos or panda breeding centers, each pregnant panda is given a designated den. There are some that use the standard holes or cubicles specially designed by the zookeepers.

However, others prefer to give birth inside the enclosure right behind a tree, under a rock, or below an object. It’s not surprising because it is natural to them. In fact, in the wild, they behave the same way.

How Long Do Pandas Stay Pregnant?

The pregnancy period of giant pandas lasts from 80 to 180 days. We can say that it lasts within  3 to 6 months. On average, it usually takes around 135 days, which is roughly 4 to 5 months.

Fertilized eggs typically float freely inside the mother’s womb before they begin developing. It is also the reason behind their variation in the pregnancy period.

In spite of the short pregnancy period, giving birth to giant pandas isn’t easy at all. Due to their special case, their cubs could be highly premature and have higher chances of dying than surviving.

Additionally, these newborn cubs have smaller bodies too; so they might look unusual to people who are not used to seeing them.

How Many Babies Do Pandas Have At One Time?

Typically pandas can give birth to one or two cubs, but rarely to three cubs. Having mostly two cubs should be good news because it means more addition to their total population, right? But, most of the time it is not a happy story.

Although female pandas may give birth to twins, usually only one survives. Giant panda cubs do not usually separate from their mothers for the first three years of their lives. This means that a wild female panda will not have time to breed in these times.

It is not unusual for a female moving into an area with males to find a mate without any trouble. However, if the area is too small for more than one male and several females, fights are likely to occur.

How Do Pandas Give Birth?

A giant panda usually sits on the floor or ground like humans in a certain area or corner and waits for the cub to come out. They are usually seen (in videos) licking their private parts to assist their babies to find their way out.

Panda cubs are usually blind, tiny, pink, and helpless. After giving birth, a mother panda will become very protective towards its cub. It will cradle its cub in a paw and will not leave the den for several days, not even to drink.

That kind of action shows that motherhood is not just for humans, but for animals, too.

Additionally, the panda cub is not able to move around within the den. Baby pandas are unable to crawl until they are three months old.

If you want a more detailed article about newborn panda cubs, click here.

How Often Do Pandas Give Birth?

Giant pandas can normally give birth every other year, or once in two years. Sounds ironic, isn’t it? Considering that their pregnancy period lasts only for 5 months, they should be able to multiply faster.

However, just like what was mentioned earlier, a mother panda will give its time in taking good care of its cub (after birth). It will not engage in any sexual activity until the cub is capable of living on its own.

Below are some relevant questions that you might want to know about.

Why Do Pandas Abandon Twins?

As we all know, giant pandas are living a poor lifestyle. Their main food source (bamboo) lacks important nutrients. Thus, the milk that a panda can produce is only enough to support one cub.

Others might see it as cruelty, but it’s actually the wisest decision that a mother panda can do on its own. It is a sad truth.  But for a mother panda, it’s better to raise one that will survive than raise two that will not.

As they usually say, it’s the “survival of the fittest.” This concept defines the existence of pandas in the wild. However, it’s not the same story when it comes to captive pandas.

In captivity or breeding centers, pandas are treated with special care. Here, twin panda cubs can both survive as their nannies will always be there to help them. In fact, with human intervention, the triplet cubs in 2014 successfully survived.

Are All Baby Pandas Born Female?

No, panda cubs are in fact born with no genitals. Thus, you cannot tell if they are male or female unless you put them under genetic test. Well, pandas are really full of wonders.

Apart from genitals, they are also born hairless and blind. They are truly in a delicate and helpless condition. Truth be told, if it’s your first time seeing a newborn panda cub you will not recognize it as a panda.

The ability to reproduce is one of the natural processes of every living creature. If humans have the right to multiply and so are the animals. Let’s promote an environment where living creatures can live the life they want without the fear of being endangered.

Here are some articles that you may also find interesting.

2. Not just 10 but 29 panda acts await for you to discover. Click this and be amazed.

3. We know that a predator hunts its prey. That being said, what hunts a giant panda?

What are your thoughts about this article? Did you find it helpful? don’t forget to share it with your friends.