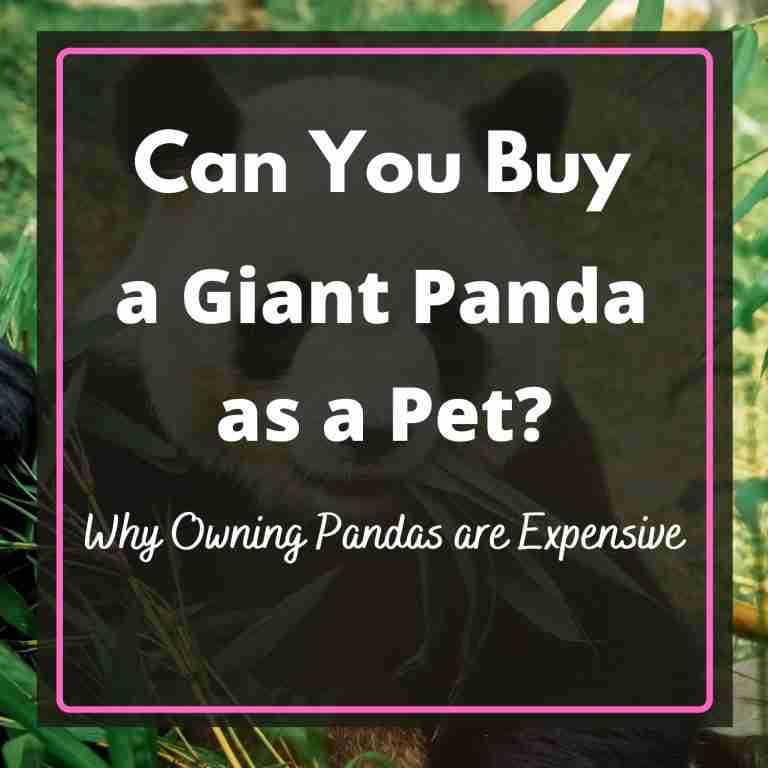 Among all the animals in the world, pandas are one of the cutest. With their black and white furs, just like that of a teddy bear, you may have thought of making them your pet. But can you buy a giant panda as a pet?

Here’s a short answer, No. Giant pandas are an endangered species, and they are rightfully owned by the Chinese government. Also, you will need a large field of bamboo to feed them daily because that’s their favorite diet.

Furthermore, giant pandas have sharp claws and strong bites which makes them dangerous to live with. It would be best you follow this guide all through, to gain a better understanding of why you can’t buy pandas as pets.

Is It Legal to Own a Panda?

No, it is not legal to own a panda because laws have been put in place against taking such action. And you know what happens when you break the law, don’t you?

Pandas don’t produce young ones regularly, which makes them an endangered species. Recent research shows that there are roughly 2000 pandas in the world as of now.  Compared to other animals, the number of pandas can be considered very small.

Keep in mind that the Chinese government is in charge of taking care of most of the pandas in the world today. They have put in place several measures as regards the protection of giant pandas.  And not only that, laws are guiding other wildlife and plants in the country.

In 1984, the Chinese government included the Forest law in their constitution. Four years later, in 1988, they passed the Law on the protection of Wildlife. The Environmental Protection Law was passed in 1989.

Moreover, a strict law was passed in 1987 by the Standing Committee of the National People’s Congress concerning giant pandas. It was stated in the law that anyone who smuggles these animals will be sentenced to at least 10 years in prison. Furthermore, the convicted individuals’ property may also be seized and they could be sentenced to life imprisonment or death.

Understandably, these laws were passed to prevent humans from causing harm to giant pandas and other endangered animals. Guess what? It worked.

There has been a remarkable decrease in the number of people who cause harm to the giant pandas since then. If these laws have not been put in the Chinese government constitution, what would have been the fate of these innocent-looking, adorable pandas? Your guess is as good as mine.

Has Anyone Ever Owned a Panda?

On the 89th Academy Awards red carpet in 2017, Jackie Chan walked on the red carpet carrying two adorable pandas on both hands. As you would expect, all eyes were on him. Who would not be, right?

In an interview, Chan revealed that he adopted the pandas in 2009 at the Chengdu Giant Panda Research and Breeding Base, China. Due to his contributions toward protecting pandas, Chan was appointed the panda ambassador at that time. His giant panda pets have become an important part of his life as he takes them wherever he goes.

Also, one major reason Chan carries the panda everywhere is to encourage people to prevent the animals from going into extinction.  Note that even though the Chinese government doesn’t allow individuals to own pandas, Jackie Chan’s case was an exception. Amazing, right?

The very reason why he was an exception to the rule is because of his heroic deeds. He rescued the two pandas from the Sichuan earthquake that occurred in 2008 and raised them. This circumstance gave him the chance to adopt the cute creatures.

How Much Does A Giant Panda Cost?

I want you to know that the cost of a giant panda is very expensive. So, you need to think twice before renting one from China. It has been estimated that to rent a panda, you may have to pay $1million yearly.

If baby pandas are born during this period, then they have to pay close to $400,000 for tax. Isn’t that unbelievable? Let me get this straight, there are other costs which include medical care, feeding, and enclosure or space that the initial charges don’t cover.

That’s not all. There’s more to something thank meets the eye. Let’s me discuss it further.

Usually, the giant pandas need a space to roam around and play with one another, which is important for mating purposes. To rent an enclosure, you need close to $24 million. Yes, that’s only allotted for the captivity.

Now that you know the cost of one panda, it will be best you have a lot of money in your bank account before renting one.

2 Ways To Own a Panda

Like I said earlier, it is impossible to buy a panda. But it doesn’t mean you can’t own a panda if you need one. You’ll agree with me that they look like a type of bear, which is kind of cool.

By adopting and renting these cute creatures, you can become a panda owner. Let’s take a look at how these can be done.

Several organizations in China are willing to offer their pandas for adoption. With a small fee, you will help these organizations preserve wildlife habitats, fund some of their works, and prevent the endangerment of pandas. By this, you will go home with any panda of choice.

Most of the time, zoos all over the world rent pandas for 10 to 15 years from China. However, know that the cost of renting a panda is very expensive; it costs millions of dollars. If you can afford the cost of rent, then confidently go for it.

Can I Buy a Red Panda as a Pet?

No, you can’t buy red pandas as pets. Even though these creatures look adorable and innocent, you shouldn’t keep them at home. They are perfect examples of “looks can be deceiving“.

Unlike the popular dog and cat pets, red pandas are wild animals that are not befitting for homes. They have sharp nails that have been designed by nature for climbing and clinging to trees. Unfortunately, their nails don’t draw back into their claws or become blunt quickly.

Now, imagine taking a red panda to your well-arranged apartment filled with nice leather furniture, and curtains. I can bet you’ll be disappointed with how the animal will destroy these materials using nails.

Another reason you shouldn’t buy red pandas as a pet is that their furs have been naturally designed for native habitat. Also, they feed mostly on bamboo.  Without the availability of these two things, the red pandas’ health may be at risk.

Furthermore, it is illegal to buy a red panda in most countries. Going against the law may expose you to jail terms and other severe punishments.

What States Can You Own a Panda?

China owns all the giant pandas in the world today. However, they loan these adorable animals out to many countries. Wherever you see giant pandas in any part of the world, keep in mind that they came from China. They were given a loan called “panda diplomacy”.

Also, feeding giant pandas with bamboo requires a large field of the plant because they eat a lot daily. It may be difficult to achieve this. However, you can symbolically adopt a panda to help their preservation.