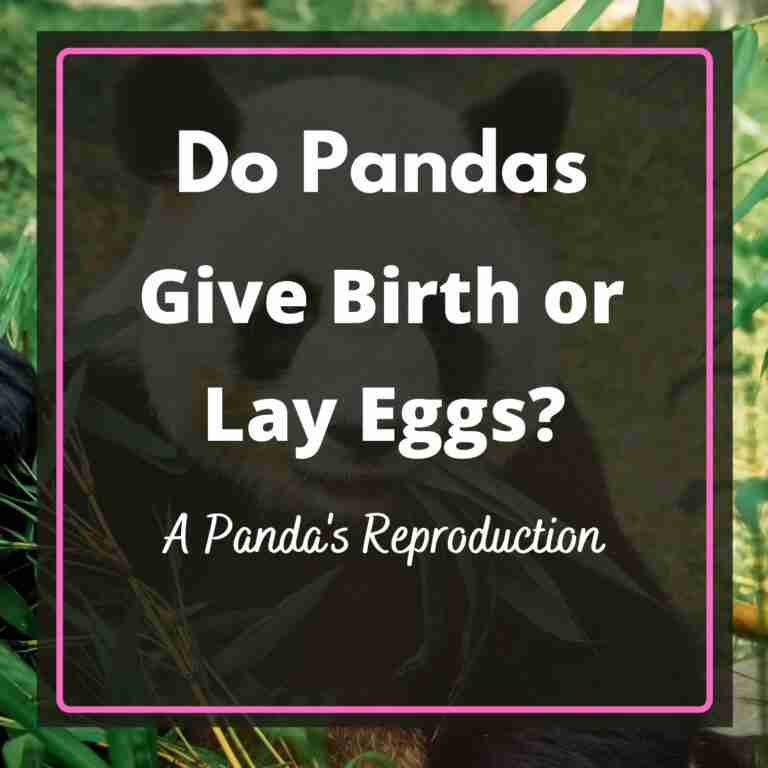 Recently, my pet dog gave birth to six puppies. They all look so cute and adorable! With the new addition to my pet, I begin to wonder, do giant pandas give birth or they just lay eggs?

Here’s what I found out – No, Pandas don’t lay eggs. Giant pandas give birth to their young, just like most mammals do. Usually, the female panda gives birth to two young ones but only one of them survives.

Now that you know that giant pandas give birth to their young, you may be wondering why they don’t lay eggs. I’ll explain the reasons in this article.

One characteristic that is common to most mammals is the ability to give birth to their young. But there are some group of mammals that lay eggs.

Since giant pandas are mammals like lions, sheep, cats, and dogs, they don’t lay eggs. It was recorded in history that mammals do lay eggs in past years. However, their early ancestors separated from the reptile family. This phenomenon is attributed to why mammals give birth to their young.

So How Many Eggs Do Pandas Lay?

Pandas don’t lay eggs; they give birth to their young like other mammals. Usually, a panda gives birth to two young ones at a time but will take care of one and neglect the other. This is one of their strange attributes.

How Do Pandas Reproduce?

At four to six years, the female pandas are ready to breed while the males are matured to breed at 7 years.

Unlike other animals, female pandas don’t ovulate frequently. They can conceive two to three days around the time of their ovulation period, which is usually in the spring. This means that the giant female panda can conceive once a year. Also, they can give birth to five to eight young ones In a lifetime.

Male pandas are attracted by the scents and sound of the females. After mating, the female panda gives birth within 90 to 180 days. Usually, the cubs are born in late summer and kept safe in dens, hollow trees, or dry grasses.

Surprisingly, a female giant panda prefers to take care of just one cub at a time, even if it gives birth to two of them.

There is a major problem with the giant pandas that may lead to their extinction. They have a slow breeding rate which makes it difficult for them to increase in number after hunting, loss of habitat, and death.

Baby pandas, also known as cubs, are usually helpless at birth. Most times, they weigh 4 to 5 ounces and will not rise without effort from their mother. Just like baby kangaroos, the baby panda is very small in size compared to that of its mother.

Note that it takes close to 90 days before the cubs can walk and they also open their eyes at 2 months.

How Long are Giant Pandas Pregnant For?

A female giant panda’s pregnancy usually lasts from 95 to 160 days. The mating process is always between March and May, which is the Spring.

After mating, which often lasts for two to three days, the male and female giant pandas separate.

Why Do Giant Pandas Have Tiny Babies?

Not only are baby pandas fragile at birth, but they are also unbelievably tiny. Compared to their mother’s size, they usually weigh 100g, which is a small size for an animal as big as that.

Research has shown that the baby panda sizes can be attributed to evolution over millions of years. They propounded that since pandas feed on bamboos, which have little to no nutritional value, their cubs will likely be deprived of the right nutrition.

How Often Do Pandas Have Babies?

Pandas give birth to their young ones every two years. Naturally, they are believed to be poor breeders due to their reproductive performance.

Being unable to reproduce as often as possible has contributed to the giant pandas’ extinction. As of 2020, only 1,864 giant pandas are in existence, according to the World Wildlife Fund (WWF).

No, red pandas do not lay eggs. They give birth like other mammals. Unlike the giant pandas, the breeding season of the red pandas is in the late fall.

Due to their fragile nature and small size at birth, the mother red panda provides warmth and shelter for the young ones for up to 3 months.

As we’ve discussed throughout this article, giant pandas give birth to their young ones, they don’t lay eggs.

They are a beauty to behold and interesting to observe. When next you visit the zoo, remember to take a few pictures of these amazing creatures.
However, do not get too close to them; they don’t like disturbance.