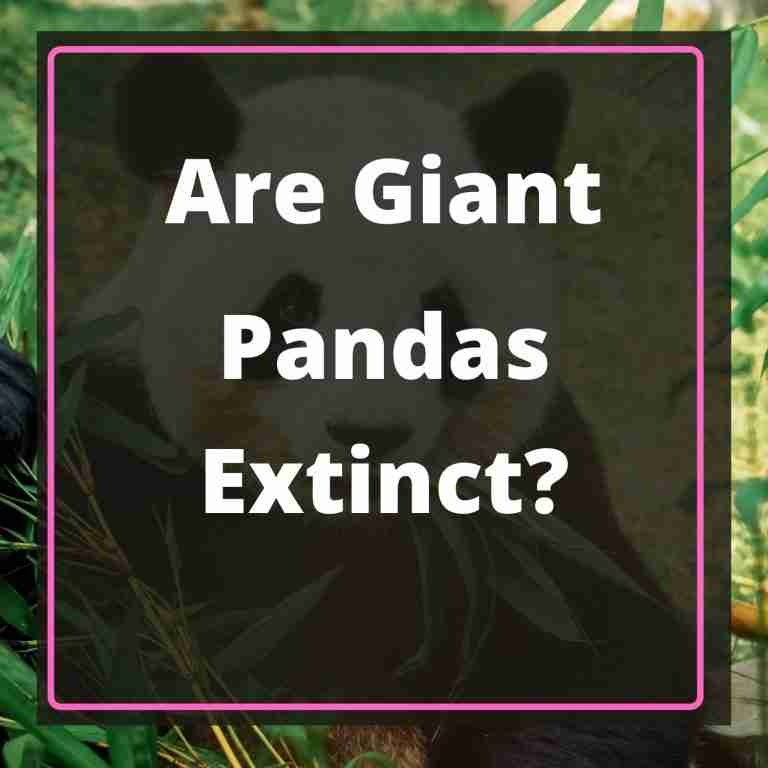 We have so many animals and birds on our planet. However, some of them like Giant Tapir and Javan Tiger become extinct or no longer exist because of many reasons. This might make you wonder, are giant pandas extinct?

Fortunately, giant pandas are not extinct. However, they were earlier classified as ‘endangered species’ or the species that have a high risk of becoming extinct.

Nonetheless, according to the World Wide Fund, pandas have recently been moved down the list of species with a high risk of extinction from ‘endangered’ to ‘vulnerable’ by China.

Why are Giant Pandas Becoming Extinct?

Pandas are slowly on the edge of becoming extinct because of different reasons. Let’s take a look at some of the major factors because of which the population of giant pandas is in threat.

Loss of natural habitat is one of the major reasons behind giant pandas becoming extinct. Due to urbanization and industrialization, more and more bamboo forests are being cut down to make room for factories, industries, houses etc. The destruction of forests leaves pandas with no safe place to live and survive.

Earlier pandas were seen in the forests of Laos, Vietnam, and Burma apart from China. However, due to deforestation and the destruction of forests, pandas now can be seen only in some places of China. Even if pandas relocate to towns due to the loss of their habitat, they won’t be able to adapt to the changed habitat and will eventually die.

As you might be aware, giant pandas mainly eat bamboo. However, pandas are finding it difficult to get enough bamboo due to cutting down bamboo forests in China on a large scale. Since food is the ultimate source of survival for every creature, there are high chances of giant pandas becoming extinct because of a lack of food.

Climate change is another cause for giant pandas becoming extinct. An increase in carbon emissions is leading to global warming. Since bamboo is quite sensitive to climate change, there are high chances of bamboo decline according to scientists. This will in turn affect the population of giant pandas as they mainly survive on bamboo.

The low reproduction rate of female pandas is another factor that can lead to the extinction of giant pandas. As per Smithsonian’s National Zoo and Conservation Biology Institute, an adult female panda ovulates only once a year. This means that a female panda can give birth or reproduce once every year, which is quite low.

Moreover, female pandas give birth to a maximum of two panda cubs a year. However, out of the two, only one survives in most of the cases. As a result, there are poor chances of population recovery, unlike the case with other animals.

Illegal hunting is another reason for pandas becoming extinct. The skin of pandas is a great source of income for humans. Pandas are therefore hunted and killed for their meat and fur. Moreover, many pandas are taken captive by poachers and breeders for domestication and breeding.

Were Giant Pandas Extinct 1000 Years Ago?

Yes, giant pandas were extinct 1000 years ago. The ancestors of present-day pandas have gone extinct 5,000 years ago as per the scientists. It was proved when a 5000-year old panda skull and bones were discovered at the bottom of a sinkhole in Yunnan, China. As per the Mirror, this discovery tells a lot about how pandas evolved over time.

There are high chances of pandas going extinct. At present, very few pandas (over 1,000) are left on the planet and they can anytime disappear if necessary actions are not taken. Low reproductive rates, climate change, illegal hunting, deforestation and other factors can make pandas extinct.

However, timely action can save pandas. If you are wondering how you can help pandas, read the next section.

How to Help Giant Pandas from Becoming Extinct?

A large number of bamboo trees are cut down for making paper. Loss of bamboo means loss of the natural habitat and food of pandas. Therefore, using less paper and switching to using recycled paper, will save pandas from getting extinct.

Although hunting is banned by the government, people still do it illegally to fill their pockets. As a result, there is a need to take strict actions against hunters and poachers by the government. Imposing heavy fines/penalties is one way to control illegal human activities.

Imprisoning and punishing people who break the laws is another way to prevent hunting by creating fear in people. Moreover, cameras can be installed in bamboo forests to easily catch people who are involved in hunting and other unethical means for money.

There are over 60 panda reserves in China. Moreover, as per the reports, panda reserves played an important role in the current rise in the population of giant pandas. However, panda reserves and welfare organizations need funds from time to time to fulfil their mission of protecting pandas.

You may bring a change by making a small donation to these organizations. Bodies such as WWF and Panda International have options of making donations on their website that you can consider.

As we have seen, cutting down forests or deforestation is one of the reasons for giant pandas becoming extinct. To make up for the loss, the afforestation or planting of more trees should be encouraged by the government.

Moreover, there is also a need to spread awareness among people regarding the risks of deforestation for the wildlife and the environment.

Sponsor or Adopt a Panda

You can also sponsor or adopt a panda to help pandas from getting extinct. Sponsoring a panda means paying some amount as a donation which is used for the welfare of pandas. By sponsoring a panda at a zoo or other organizations, you get an adoption certificate and amazing panda goodies that you can gift to small kids. Isn’t that interesting?

How Many Giant Pandas are Left in the World?

As per the latest census, 1,864 giant pandas are left in the world. According to the International Union for Conservation of Nature (IUCN), there are an additional 400 giant pandas living in captivity.

Were Giant Pandas Extinct in 2020?

No, giant pandas were not extinct in 2020. Although pandas were classified as ‘endangered’ earlier, somewhere around 2004, they were later termed ‘vulnerable’ by China because of an increase in their population.

Are Giant Pandas Endangered in 2021?

As per the latest news reports, giant pandas are no longer endangered in 2021. It has been claimed by Cui Shuhong, director of the Department of Natural Ecological Protection of the Ministry of Ecology and Environment, that pandas will be re-classified as ‘vulnerable.’

In this article, we have seen how giant pandas are at great risk of becoming extinct due to a number of reasons. Although there is a slight (17%) increase in the population of giant pandas, there are still only 1,864 pandas left in the world.

Since pandas have low reproductive rates, it is unlikely for them to recover their population which is lost due to hunting, illegal activities, climate change, deforestation and other illegal human activities.

It is surprising that despite being the most adorable and loved animals, pandas are close to becoming extinct. Strict policies and collaborative efforts are the only way in which we can save pandas from going extinct.

If you are thinking of ways in which you can help these cute creatures from disappearing from the planet, do read this article and don’t forget to take the necessary actions.