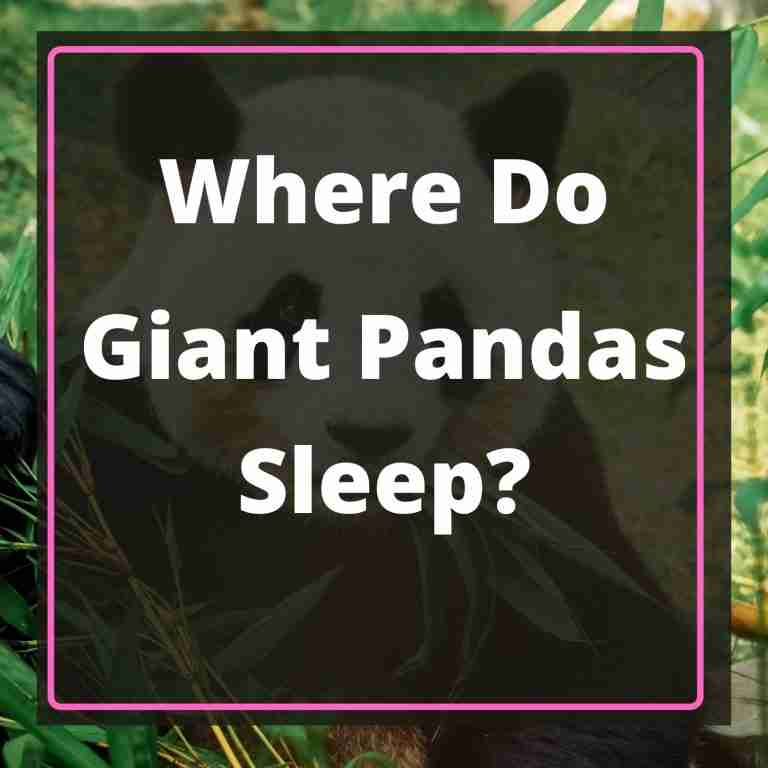 There are a lot of exciting things about giant pandas. Despite being big creatures, they climb so high, swim well, eat so much bamboo a day, but they also sleep like forever. However, many might wonder, where do giant pandas sleep?

Giant pandas Sleep in different areas such as the forest floor, trees, mountains, or even in caves. When sleep comes around, these creatures don’t think too much for a perfect spot or go around finding any sleeping area common to them.

They’re fine with any comfortable area around them, both high and low, and more especially when they have fewer or no predators to be careful about.

Knowing that pandas are not the kind of creatures with permanent sleeping areas, you might also want to know when this sleeping time happens.

Let’s discuss this below!

When Do Giant Pandas Sleep?

Pandas have no specific time frame for sleeping. They normally sleep after eating lots of bamboo. They sleep a lot just the way they eat. These nap times normally come after every heavy meal.

We, humans, have the night set for sleep, but that’s not the case with pandas. They’re not nocturnal but can wake up during nights to resume feeding on their bamboo diet. So, for a Giant panda, the night isn’t a sleeping time. Daytime is when you’ll find them sleeping the most.

How Long Do Giant Pandas Sleep?

Interestingly, these creatures sleep for about 2 – 4 hours at once. Moreover, the total for a day is about 10 hours or more. As long as they feed on their heavy bamboo diet, sleeping is something they do on and on throughout the whole day.

How Do Giant Pandas Sleep?

A giant panda’s way of sleeping comes with many poses that are somewhat similar to that of humans. Some common ones they do are to lie flat on the floor on their back, belly, sideways, or just curl up themselves. While on tree branches, lying on their belly is what you’ll see them do.

Where Do Giant Pandas Sleep in Zoos?

In Zoos, giant pandas sleep in areas that feel comfortable for them. It could be on the zoo floors or beside tree trunks and or on the branches available for them in the zoo. The zoo builds pandas’ areas to look almost like their natural habitat.

However, such an area must look as natural as possible, having the large trees, grasses, and some other features you’ll find in a Panda’s natural habitat.

Do Pandas Sleep in Caves?

Yes, they do. However, sleeping in these caves isn’t a permanent thing. A panda’s sleeping area is not a specific place.

These cute creatures aren’t selective of their sleeping areas. It could be on the forest floor or above the forest on crossed tree trunks. However, during cold times, pandas move to lower grounds and would normally go for caves or hollow places.

To sum up, they can sleep almost anywhere as they have little worry or none at all about any predator. As long as it’s comfortable and keeps them covered during winter or safe from any possible natural predator around such an area.

Moreover, not being picky of their sleeping spot is a behavior that makes them special just the same way they’re known for their eating habits.

So, whether high or low, a Giant panda can have their naps. Also, if it’s night or day, you’ll find these cute creatures sleeping. If this article was helpful, don’t hesitate to share it!