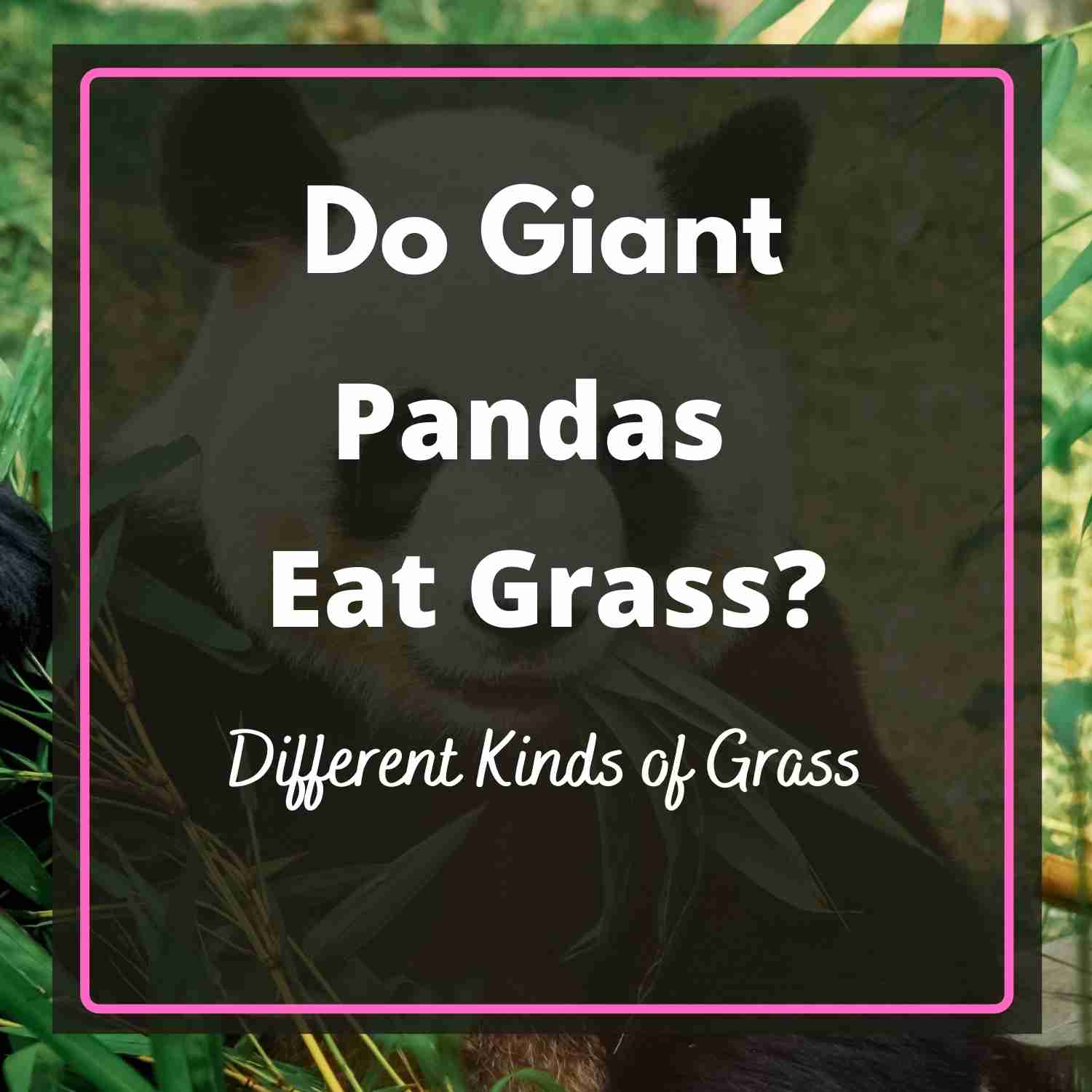 One of the rarest creatures in the world lives in dense bamboo forests in the rainy hills of southwestern China; they are no other than giant pandas. They evolved from being carnivores to herbivores. Considering the fact that they are now herbivores, do giant pandas eat grass?

Yes, giant pandas eat grass. As mentioned earlier, they are herbivores. Meaning to say, they feed on plants or grass. Moreover, only around 1,500 of these white-and-black species survive in the wild.

Now that you know that pandas eat grass, you might be wondering what type of grass do they eat, right? Also, is bamboo a type of grass? If they were carnivores before, when did they start eating grass?

Well, worry no more. Simply because I will answer all the questions in your mind. So, let’s get into it and keep reading ’till the end to confirm if what you know is right or not.

Which Type of Grass Do Giant Pandas Eat?

Bamboo is the type of grass that giant pandas eat. It is approximately 99% of their diet. But what kinds and portions of bamboo do they eat?

Moreover, they eat different parts of bamboo compatible with the seasons. They like to try many kinds of shoots in summer and spring. In winter, they mainly eat roots; in autumn, they eat bamboo leaves.

But pandas branch out, with about 1% of their menu containing other plants and even meat. While they are nearly vegetarian, pandas will seldom hunt for pikas and other little rodents.

Admittedly, as members of the bear class, giant pandas own the digestive system of a carnivore, even though they have emerged to depend almost entirely on bamboo.

Is Bamboo Really A Grass?

Yes, bamboo is a type of grass. Bamboo belongs to the grass family (Bambusoideae) with long, hollow, woody stems. Basically, they are just tall grasses.

Because of its strength and flexibility, you can use it for crafting eco-friendly planters such as flowerpots, nursery pots, and cover pots. Moreover, you can discover an incredible variety among bamboo species, from giant bamboo to Japanese timber bamboo to hedge bamboo and everything in between.

Still, these enduring evergreen plants share a minimum of one thing in common: they all are grass, not trees, despite how they seem at initial glance.

Don’t feel sad if you’ve earlier mentioned bamboo as a tree. In India – a nation that is only next to China to produce bamboo – the Forest Act of 1927 legally represented bamboo as a tree, making cutting and carrying it from forests illegal.

Currently, India states that it wasn’t till the Forest Amendment Bill of 2017 that the Indian government eventually declared that bamboo is not a tree.

Is Bamboo Healthy for Pandas?

No, it is not the best for pandas. Researchers suggest that giant pandas have faulty gut bacteria that prevent them from digesting bamboo efficiently. Despite eating about 12.5 kg (27.5 lbs) of plant stems and leaves for up to 14 hours a day, the animals can only digest 17% of what they consume.

Moreover, pandas’ stomach microbiota – the microscopic plant and creature life that naturally exists in their intestine – does not really tolerate bamboo.

Yes, they can. Just like what was stated earlier, pandas can only digest 17% of what they eat. Basically, they can still digest it but not all of it. For nearly 2 million years, Giant pandas have been consuming an exclusive bamboo diet.

Earlier research has proposed that a carnivorous diet entirely suits bears’ digestive systems, leaving researchers fascinated by how these animals digest and obtain nourishment from bamboo. Scientists believed that pandas’ gut microbiota, which helps absorb nutrients and digestion, may have shown a specialization to a herbivorous intake.

However, the new research results discovered the pandas’ gut microbiota is not made up of plant-degrading bacteria such as Bacteroides and Ruminococcaceae, but other bacteria like Streptococcus and Escherichia.

When Did Pandas Start Eating Grass?

As carnivores, it is difficult for giant pandas to feed so much on plant material. As their ancestors mainly consumed meat, giant pandas belong to the bear class, so they’ve always been omnivores (can eat both meat and plants).

Apparently, they still have canine teeth and a digestive system of a carnivore mammal. Although they have developed to depend totally on bamboo, they can still eat meat.

At a similar period, though probably later, loss of genetic element caused giant pandas to lose their taste for meat. Studies show giant pandas had evolved entirely to being bamboo feeders from 2 million years.

The answer is no. The newly born baby panda depends on its mother’s milk or processed milk for about six months. After that time, the adorable panda cub begins consuming bamboo and other foods.

By their first birthday, infant pandas weigh more than 75 pounds. However, the mother still feeds the child for another six months for encouragement.

When the panda reaches one and a half or two years of age, it is ready to be separated from its mother. An adult male panda can weigh about 300 pounds, while female pandas can weigh an average of 200 pounds.

What Do Pandas Eat Besides Bamboo?

Pandas consume only a very small amount of meat and most other plants. Considering the fact that bamboo makes up 99% of the pandas’ diet, that means there’s only 1% remaining for something different.

The giant pandas like to eat many plants and foods including vines, corn, apples, and carrots. Moreover, we usually assume pandas to be plant-eaters, but they will sometimes cheat on their regular bamboo diets to consume fish or small mammals like pikas.

Where Can Pandas Eat Grass?

Pandas can eat grass in both bamboo forests and artificial habitats. In the wild, bamboo develops in warm and moist environments like the mountain ranges of Min and Qin. It is mainly the reason why giant pandas are endemic to Central China.

Furthermore, there are many places in the world where bamboo can grow dramatically. Does it mean pandas can live anywhere? But why are they endemic if that’s the case, right?

You can find the best answer to these questions in this article.

What type of Grass Do Pandas Eat in the Wild?

There’s the only type of grass that giant pandas depend on, bamboo, and it won’t be untrue to state that 99% of the giant pandas’ diet is the only bamboo. However, there are several classes of bamboo in the forests.

Giant pandas do not consume all bamboo species, but the best bamboo species for pandas are water bamboo, black bamboo, arrow bamboo, and around 20 more additional species.

Giant pandas typically consume 23 to 40 Kg of bamboo in a single day. It is due to the shallow nutritional content of bamboo. So, they eat ample food to satisfy their daily energy needs.

Yes, they eat bamboo. It comprises 85 to 95% of the red panda’s diet. Unlike giant pandas that depend mostly on bamboo, red pandas feed particularly on the various nutritious leaf tips and, and sometimes fresh tender shoots.

They may also seek fruits, insects, roots, succulent grasses, and grubs. Sometimes, they also kill and eat birds and other small animals.

Red pandas exist in regions from west Sichuan and Yunnan Provinces of China to northern Myanmar (Burma). You can also witness them in suitable habitats in India, Nepal, and Tibet. They like to stay in high-altitude temperate forests with bamboo understories in the high mountains and Himalayas.

No, they do not eat bamboo. Bamboo is not in the range of the trash panda food, and they would not consider it as food even if it were.

Trash pandas, commonly called Racoons, are animals native to the United States. They are usually three feet in height, with a 12-inch-thick tail.

Furthermore, they are omnivores and will consume nearly anything they can discover. From snails to clams, fish to frogs, raccoons are enormous fans of water creatures. They will also consume fruits, vegetables, nuts, and seeds.

The main thing that raccoons also like is trash; that’s why they are known as trash pandas.

Which Other Animals Feed on Bamboo?

The following are the animals that are entirely or infrequently dependent on bamboo:

The Bamboo lemurs are average-size primates that breathe entirely on Madagascar. Sometimes they are also called Gentle lemurs. They favor moist forests where bamboo produces more.

They are known as bamboo lemurs because of their exclusive diet of bamboo. How they can detoxify the vast quantities of cyanide (from bamboo shoots) in their intakes is still unknown.

The mountain gorilla is originally an herbivore; most of its diet (85.8%) comprises the shoots, stems, and leaves of 142 plant species.

Mountain gorillas visit the bamboo forests during several months of the year when fresh shoots are available. Bamboo carries a lot of sugar, and it helps to provide a lot of additional energy to the gorillas.

Chimpanzees are omnivorous species (they depend on both plants and meat), just like human beings.

Chimpanzees also utilize bamboo rods to draw the termites out and eat them.

The Asian elephant is the most significant living land mammal in Asia. They eat a lot. They grab up to 330 lbs. (150 kg) of plants each day and are known to consume 112 diverse plant species.

While elephants consume several bamboo varieties, their favorite one is Mai Roak Bamboo. They love all of it – seedlings, shoots, stems, and leaves.

In this article, you learned that pandas eat mostly bamboo (tall and fast-growing grass). Pandas consume bamboo stems, leaves, and shoots (green, young bamboo plants). You also learned that approximately 99% of their diet comes from bamboo and the remaining 1% comes from different food sources.

Historically, pandas evolve themselves to be herbivorous. They decided to eat bamboo as their primary food source. This way, they can get away from the tight competition among carnivores.

But instead of letting them live peacefully, some humans invade the bamboo forests causing the pandas to stay away. It is one of the main reasons why pandas’ population decreases dramatically.

For more relevant articles, you may want to visit the following links below.

1. What! Pandas do eat their babies. Is this for real?

2. Perhaps, the apple of Snow White was given to a panda. Does it mean pandas do eat apples?

3. Neither fruit nor meat, but the cuddly panda bears can’t live without it? What is it?

4. Bunnies are not the only ones who love carrots. Do pandas love them too?

5. If Pan Pan of We Bare Bears is allergic to peanut butter, does it apply to a real panda too?

What do you think of this article? Did you find it interesting? Don’t forget to share it with other panda lovers.