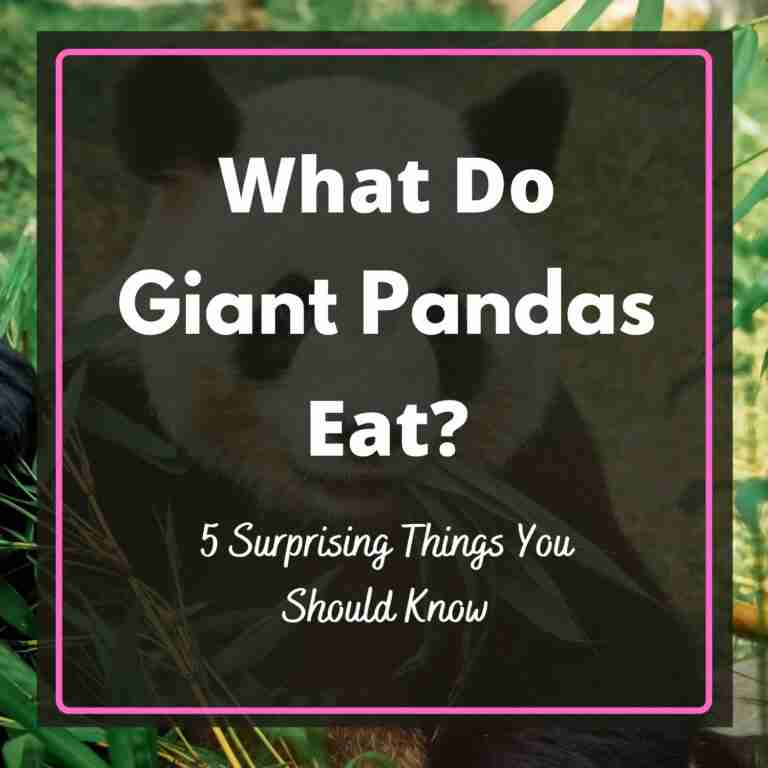 Are you curious about “what do giant pandas eat?” Then, this article will answer your simple question. Additionally, you will get to know more about the other food that a panda can eat.

Keep on reading to learn more!

What Does A Giant Panda Eat?

The entire diet of giant pandas totally depends on bamboo, and it won’t be wrong to say that 99% of the giant pandas’ diet is bamboo. However, there are different species of bamboo in the forests.

Giant pandas do not eat every species of bamboo, but the most likeable species for pandas are water bamboo, arrow bamboo, black bamboo, and about 20 more other species. Among bamboo, pandas like to eat leaves, shoots, and roots.

Moreover, the eating habits of giant pandas change with the seasons. During the spring season, they like to eat different kinds of shoots, while in autumn, their entire diet depends on the leaves of bamboo. However, in the winter season, they mainly eat roots.

Giant pandas usually eat 23 to 40 Kg of bamboo every day. It is because of the very little nutritional value in bamboo. So, they eat a lot to meet their daily energy needs.

What Do Giant Pandas Eat Besides Bamboo?

Giant pandas not only eat bamboo, but there are other plants and foods that giant pandas eat like vines, apples, green corn, and much more.

The following are the giant panda facts you need to know for understanding the diet of giant pandas:

Not only this, but most of the captive pandas also like to eat steamed cornbread and panda cakes. However, during the summer season, the diet of captive pandas is ice mixed with the apples to cool them down.

When it comes to the nutrition of giant pandas, great care is required to make sure that the pandas get enough nutrition from the fruits.

The food selection process goes through several rounds of examination before feeding to pandas. It is to ensure the health safety of giant pandas.

It is now evident that giant pandas eat fruits and other foods like steamed cornbread.

Yes, giant pandas can eat vegetables even though their digestive system is better equipped to digest meat.

So, why do these giant pandas survive on low nutrient foods like bamboo and vegetables?

According to a study, scientists found that giant pandas expend a low amount of energy daily. The reason behind this is the low levels of physical activity and lower levels of thyroid hormones.

So, it won’t be wrong to say that 99% of giant pandas’ diet depends on bamboo and the remaining 1% depend on other foods like vegetables, fruits, and sometimes rodents.

99% of the giant pandas’ diet depends on bamboo. However, according to the anatomy of their digestive tract, it is evident that giant pandas are able to digest meat.

We all know that Tigers can eat meat and Cows cannot; it is because of their different body and digestive structures. However, the anatomy of the giant pandas’ digestive system is unique subject to their diet or food they eat.

Ailuropoda melanoleuca or giant pandas belong to the bear family, which means they are able to digest meat like the other species of the same bear family.

Now, you might be thinking of why giant pandas only eat bamboo instead of meat. Well, a recent study explains that giant pandas became herbivores about 2.4 million years ago and completely switched their diet to bamboo.

However, with evolution, the anatomy of their digestive tract is still the same – which means that they are still able to digest meat. Theoretically, giant pandas can eat meat but not grass.

What Do Pandas Drink?

Another important fact about the giant pandas is that they get most of the water from bamboo and grasses. Giant pandas feed on the shoots of bamboo, which are 90% water.

However, giant pandas need more water than they get from bamboo, so they meet their water needs by drinking fresh water from rivers and streams that fill up by the melting of snow on the top of mountains.

What Do Baby Pandas Eat?

The newly born baby pandas rely on their mother’s milk for almost 6 months. After that period, these cute cubs of pandas start eating bamboo and other foods.

After the first birthday, baby pandas weigh more than 75 pounds. Although, the mother still nurses the baby pandas for another 6 months for comfort.

After one-and-a-half or two years, the baby panda is ready to get separated from its mother. However, the baby panda still grows and gains weight. The maximum weight it gains is up to 300 pounds.

So, after the initial five to six months of baby panda’s birth, the baby panda is able to walk, climb, and eat solid food like bamboo and some fruits.

Giant pandas totally rely on bamboo, and sometimes they eat fruits and vegetables as a secondary source of food. On the other hand, bears are omnivores, and they eat meat, unlike giant pandas.

The pandas living in zoos also like to eat some vegetables and fruits as a snack. Moreover, some wild giant pandas also eat small rodents and pikas as a source of meat.

Yes, you can say that giant panda are vegetarian because they are herbivores and get 99% of their food from bamboo.

However, it is really interesting to know how pandas changed from eating meat to vegetables and then to only bamboo.

Giant pandas are highly mysterious animals on the earth because of their dual traits – both herbivorous and carnivorous. Giant pandas are considered as specialized herbivores that exclusively feed on high fibrous bamboo, despite the fact that they are the descendants of flesh-eating carnivores.

According to new research on the Nutritional Geometry of giant pandas, it is evident that giant pandas have developed some traits relating to herbivores during their evolution for the past millions of years.

Among those herbivorous traits, some include teeth, jaw musculature, and a skull that are adapted for fibrous diets. Moreover, a pseud-thumb is another evolution in giant pandas for handling bamboo.

Additionally, this research reveals the fact that giant pandas have lost the ability to taste umami, which is usually connected with flesh-eating.

Yes, giant pandas can eat apples, but apples are like a secondary source of food or as a snack for them.

Usually, when someone mentions giant panda, we come across a cute black and white animal holding a stalk of bamboo in its paws and eating it. No doubt, bamboo is the principal source of food for giant pandas.

But when we talk about the captive giant pandas, they also like apples as a snack. It won’t be wrong to say that a sweet red apple is one of the favorite snacks of giant pandas.

Although apples are rich in vitamins and microelements, it is important to undergo a food selection process before feeding apples to giant pandas. Since the giant pandas only rely on bamboo, so great care or precaution is required while changing their diet.

Animals experts also suggest that you should feed captive pandas in the morning and afternoon because they have less physical activity and spend most of their time sleeping.

Yes, giant pandas can eat carrots. The giant pandas living at the zoo eat carrots and other vegetables and fruits like apples, sugar cane, sweet potatoes, a special high-fiber biscuit, rice gruel, and of course, their favorite bamboo.

Not only this, but there are a lot of videos of giant pandas eating carrots as a piece of evidence. As I mentioned earlier, 99% of the giant pandas’ diet depends on bamboo, and the remaining 1 % depends on other foods like fruits, vegetables, small rodents, and pikas.

What Type of Meat Do Giant Pandas Eat?

The giant pandas are usually vegetarian and completely feed on bamboo. But it is also true that giant pandas sometimes hunt for pikas and small rodents as a source of food.

So, you can say that giant pandas sometimes eat meat, but that is rare. This trait of the eating meet has been evolved from the ancestral pandas like 2.4 million years ago. Giant pandas relate to the same family as the bear.

Due to this reason, sometimes giant pandas hunt for small rodents and pikas to feed on them. Moreover, some wild giant pandas are also reported to be seen while eating meat in the northwest region of China.

The hidden cameras also captured the images of wild giant pandas eating meat in China. So, it is clear that giant pandas can sometimes eat small rodents and pikas, but their major food source is still bamboo.

To summarize, giant pandas’ diet 99% rely on bamboo, and the remaining 1% rely on other foods like fruits, vegetables, small rodents, and pikas.

I have explained everything relating to the diet of giant pandas in detail. Moreover, you might have understood the evolution of giant pandas and their digestive system in this article.

Similarly, this article also includes the diet of small baby pandas and how much time they spend with their mothers.

The important and interesting fact about the diet of giant pandas is that the wild pandas usually feed only on bamboo, but on the other hand, captive pandas or pandas living in zoos also eat some other foods like fruits and vegetables as a source of food.

However, proper precaution is required to feed other foods to giant pandas.

Love our Article? PIN IT to your “Panda Facts” Board