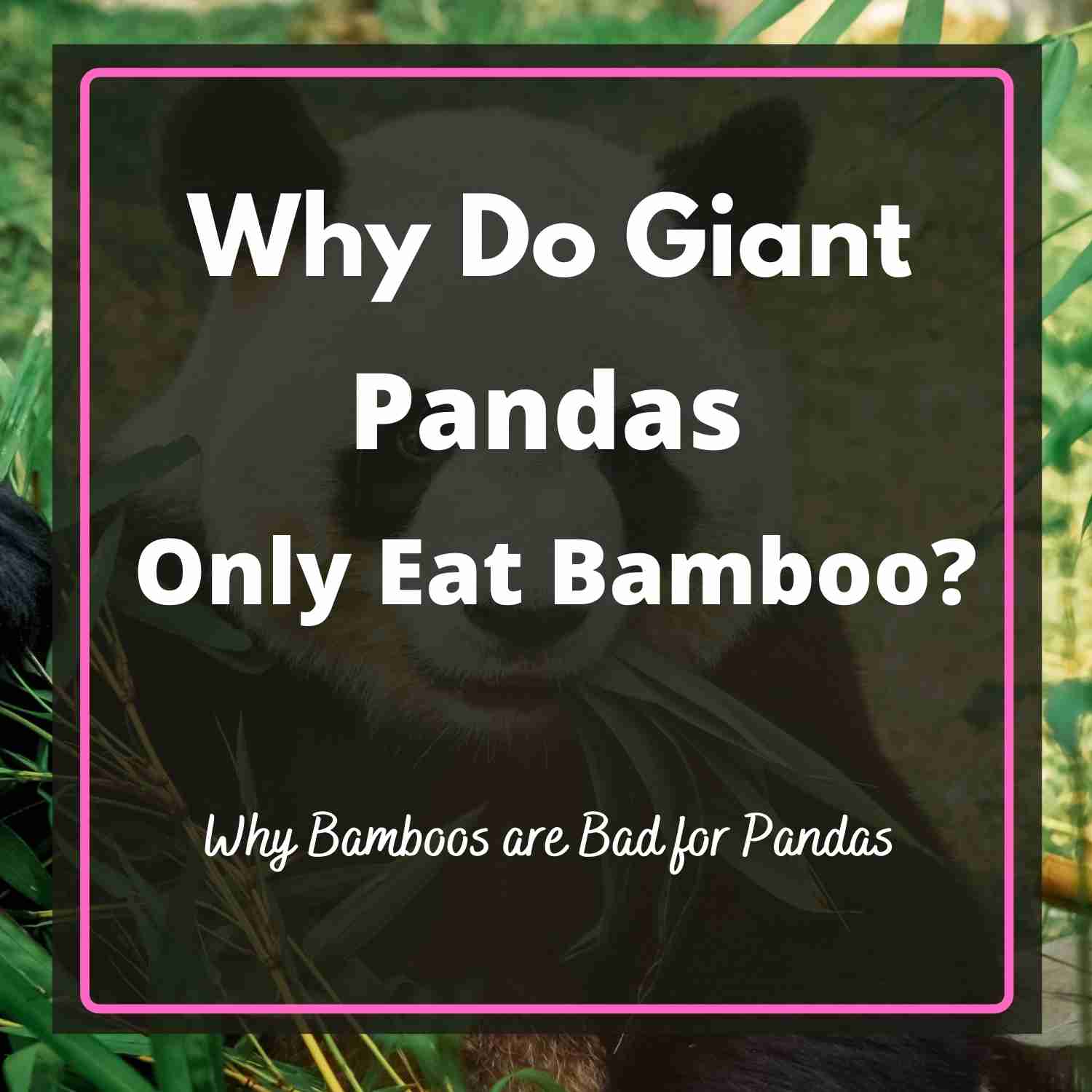 Bamboo is the primary food source of giant pandas. These are the tall grasses that grow freely in the rainforests. In fact, 99% of giant pandas’ diet consists of bamboo. But why do giant pandas eat only bamboo?

The giant pandas chose to eat bamboo because it is plentiful in the forests. And they don’t have to go with much trouble just to get it, because only a few animals depend on eating bamboo. On the other hand, the remaining 1% of their diet comes from other plants and animals.

However, this is only a surface. More facts are waiting for us to unfold. Join us as we find out the reasons why giant pandas’ diet consists mainly of bamboo.

Why do pandas eat bamboo and not meat?

Pandas eat bamboos that are abundant in the rainforests. Another thing is that there is less competition with this type of food source. Survival is one of the main goals of wildlife. And securing the food source is the smartest way for them to survive in the long run.

The decision of the giant pandas to evolve is quite a smart way. In the forest, bamboo will sprout and grow anywhere. They need no extensive care for them to grow, simply because they are grasses. Also, only a few find interest in eating these tall grasses.

The giant pandas are members of the bear family, they have moved away from their family’s carnivorous diet. Although, there are times that they eat meat too. They changed their eating habits several years ago to become herbivores. However, the bamboo lacks the nutrients to support their body needs. And there is no way to make bamboo as nutrient-filled food for pandas.

Therefore, the pandas have to face the consequences of eating bamboo from time to time. They need to eat 25-50 pounds of bamboo every day. This way, the body can keep up with the nutrients it needs. But the best thing is that they can eat anytime they want without worrying about where to find it.

Can pandas survive without bamboo?

It is a clear no. Just like what we mentioned before, 99% of the diet of giant pandas depends on bamboo. If there is no bamboo for the pandas to eat, they are more likely to starve. The severe starvation will eventually kill them.

In captivities, the experts are trying to feed them other food. However, the appetite of pandas for bamboo is very evident. That’s why even if they eat fruits and other food in captivity, the taste of bamboo is still irreplaceable for them.

On the other hand, they may survive if they evolve themselves to become carnivorous. But evolving will take them a lot of years before they will completely become meat-eaters again. So, before they even get to adjust to a new eating habit, they will end up dying from severe hunger.

According to the scientists’ studies, the ancient pandas had an omnivorous diet in the past. But these iconic black and white bears started feeding merely on bamboo around 5,000 to 7,000 years ago. So, with these studies, we can say that they did not always eat bamboo.

Moreover, if you read some research about the digestive system of the giant pandas you will know that they have a digestive system like that of a wolf. They also have meat-digesting microorganisms in their stomach where digestion of food happens.

What do giant pandas eat other than bamboo?

As we have mentioned, 99% of the giant panda’s diet comes from bamboo. The remaining 1% comes from honey, vines, flowers, corn, honey, and grasses. They also eat fruits like their favorite apples.

However, it is not only limited to some plants, it also includes some animals. So, the giant pandas can eat meat too. They hunt small rodents and some fowls. They even eat cakes and other food supplements that are organic.

If you want further details about “what do giant pandas eat?”, CLICK HERE.

Is bamboo bad for pandas?

Bamboo is the primary food source of the pandas. It is the only food they can rely on in this current era. Although studies show that bamboo lacks nutrients, it still helps in the survival of the pandas. So, if you want to know if bamboo is bad for the pandas, I guess the answer is quite clear.

On the other hand, there’s something you should know about the giant pandas. Even though most of their food comes from bamboo, it is also a kind of food that they cannot digest well. The microorganisms in the digestive system of the giant pandas work well in digesting meat and not bamboo. In fact, they only digest 17% of what they consume.

Furthermore, the low nutrients in bamboo consumption affect the growth of the baby giant pandas. Inside their mother’s womb, they only received a few amounts of nutrients that they need for them to further grow and develop. So, the tendency is that they will be born premature and so small.

The story gets even worse when the giant panda mother gives birth to twins. It will only choose the stronger and the weaker one will be left out to wait for its death. Not because panda mothers hate weak cubs, but they know to themselves that they cannot afford to raise both due to the lack of nutrients in their diet. So, they would rather raise a strong one that can survive than two that cannot.

Which part of bamboo do pandas eat?

Since pandas are so in love with eating bamboo, might as well we should know which part of the bamboo they love to munch. Just like the usual appetite of the herbivores, the first in their list are the leaves. It serves as the main course of their diet.

Moreover, for the giant pandas, the bamboo is their coconut tree (tree of life). Simply because they eat most of the part of the bamboo including stems, roots, and shoots. In short, nothing is wasted from the bamboo.

However, since they cannot digest it well, most of the time this huge amount of bamboo becomes waste. Literally waste, because they simply poop most of what they have eaten. That is the usual daily eating routine of a panda, though may sound ironic but it is real.

In this article, you learned that bamboo is the primary food source of the pandas. On the other hand, you also learned about other food that the pandas eat like other plants, fruits, and some animals.

In the concept of survival of the fittest, the best animal who can survive longer are the ones who learned how to adjust to their environment. The pandas made a clever decision by feeding on bamboo. But no matter what they do this world is too cruel for the animals.

The human invasion causes the destruction of bamboo patches in the wild. This is the main reason why pandas became endangered species before. Fortunately, their status has improved already. Let’s not give them further reason to be in the worst condition again.