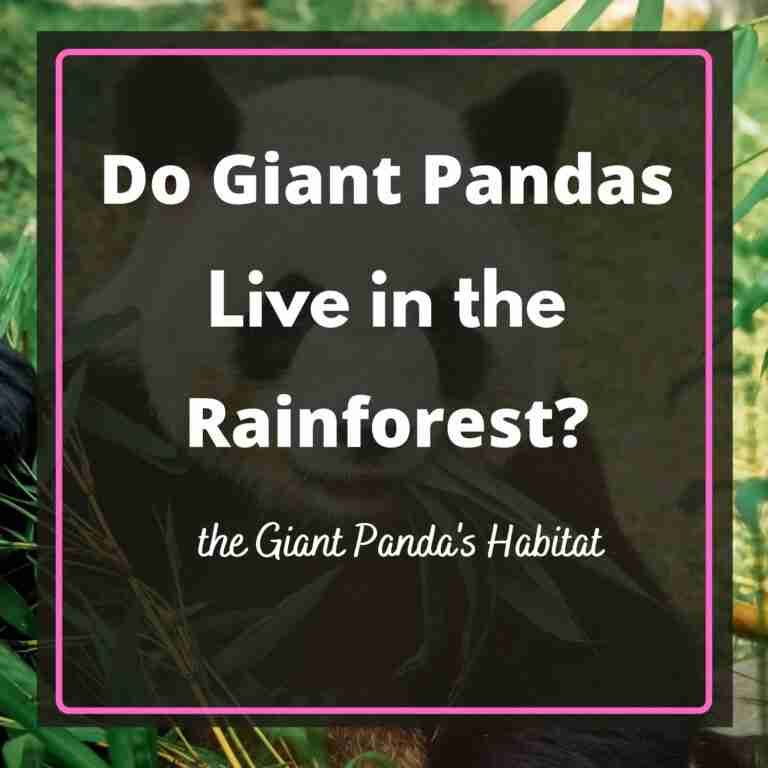 Most of you know that pandas are from China. Well, you are right since giant pandas only naturally exist in China. Here they live freely in the wild. Now the question is, do giant pandas live in the rainforest? And if they do, can they survive in any rainforest around the world?

Yes, they do. Giant pandas are living naturally in the rainforest of Minshan and Qinling mountains in Central China.

However, can they really survive in any rainforest around the world? Worry no more, because you will know more about rainforests and their importance to the pandas in this article. Sounds interesting? Let’s get started!

Do giant pandas live in the rainforest?

The eating habit of the giant pandas is quite too much. This is the main reason why they should live in a bamboo rainforest. Here, they can eat whenever they need to and can sleep whenever they want to. It is like a place where they can freely do whatever they want to do and live normally and naturally.

Sadly, due to the continuous human invasion, the space for their natural habitat is slowly becoming smaller and being compromised. If this will continue to happen, we should not expect to see any pandas nor rainforests in the future.

What is a rainforest?

A rainforest is a woodland of broad-leaved evergreen trees that forms a widespread canopy with continuous rainfall throughout the year.

The two types of rainforests are called temperate and tropical. These two rainforests are the same. They just differ in terms of location, climate, amount of rainfall, and decomposition status.

Climate: They are cooler than tropical rainforests. They have temperatures that rarely fall below freezing and that typically range no higher than 80 degrees Fahrenheit in the summer.

Amount of Rainfall: They have an average rainfall of 140 to 167 inches per year.

Decomposition: They have a cold temperature that slows down decomposition and creates a very large nutrient-filled soil.

Climate: They are hotter than temperate rainforests. They have temperature that usually reaches between 70 to 90 degrees Fahrenheit.

Amount of Rainfall: They have an average rainfall of 400 inches per year.

Decomposition: They have a hot temperature that accelerates decomposition and creates a very thin soil that lacks nutrients.

Why is the rainforest ideal for giant pandas?

As mentioned earlier, a rainforest has widespread evergreen trees, though in China they have a very special rainforest that is filled with a great understory of tall grasses (not trees) commonly known as bamboos. The rainforest, specifically temperate rainforest in the mountain ranges of Central China is the best for the survival of the giant pandas for both food supply and temperature.

Do giant pandas live in the tropical rainforest?

They can but they don’t. Unlike red pandas, giant pandas can’t survive long in tropical rainforests. Not only because of the hotter temperature that it has, but also the amount of food supply that it can provide. The tropical rainforest has many wild carnivorous animals too that may find a panda as their food even though they don’t have any natural enemy in the wild.

Take note: They may be able to live but their survival, in the long run, is not assured.

Moreover, giant pandas are endemic to the temperate bamboo rainforest in Central China simply because it’s the perfect place where they can live normally.

Do red pandas live in the rainforest?

The answer is yes. They live in both tropical and temperate rainforests in the mountains of Nepal, Central China, and Northern Myanmar. Just like giant pandas, they feed primarily on bamboo.

However, they have a larger scope of food that they may eat than giant pandas. That is the reason why they can survive in any kind of rainforest. They are also meat eaters which allows them to survive greatly in the wild.

Unfortunately, red pandas are now considered endangered species. It is due to the continuous illegal human activities in the wild. Hopefully, just like giant pandas, their conservation status will improve in the future.

Top 15 places where you can find the rainforest?

It is known to be the largest tropical rainforest in the world, also known as the Amazon Jungle and it is located in Brazil in South America.

It is the second-largest rainforest in the world, located in Congo in Central Africa.

It is a rainforest that spreads on the west coast of southern America, located in Chile and Argentina.

It is a tropical rainforest named after Richard Daintree (a pioneering geologist and photographer) and it is found on the northeastern coast of Queensland in Australia.

It is located in Southeast Asian countries like the Malay Peninsula, Laos, Indonesia, and Cambodia.

It is the biggest national forest in the United States in North America.

It is also known as Tama Kinabalu and is located on the west coast of Sabah, Malaysian Borneo.

It is a rainforest in the Costa Rican Reserve located along Cordillera de Tilaran in Alajuela and Puntarenas provinces in Costa Rica in Central America.

It is a forest reserve and a biodiversity hotspot located in Sri Lanka in Southern Asia.

It Is the largest temperate rainforest in the world that is found in North America along the western side of the Pacific Coast Ranges.

It is located within the Bangladesh area and covers 40 percent of India.

It is one of the most diverse and unique animal and plant species in the world and is located in Papua New Guinea in Oceania.

It is located in southwest Liberia in Africa.

It is located in the Min and Qin mountain ranges in Central China.

In this article, you learned about the rainforest where pandas live. You also learned the reason why they can only live in a certain type of rainforest. And the location of the different rainforests around the world.

May all the people in the world continue to protect and preserve the nature where wildlife exists. With that, we can assure that in the future we can still live with these creatures; like our beloved pandas.