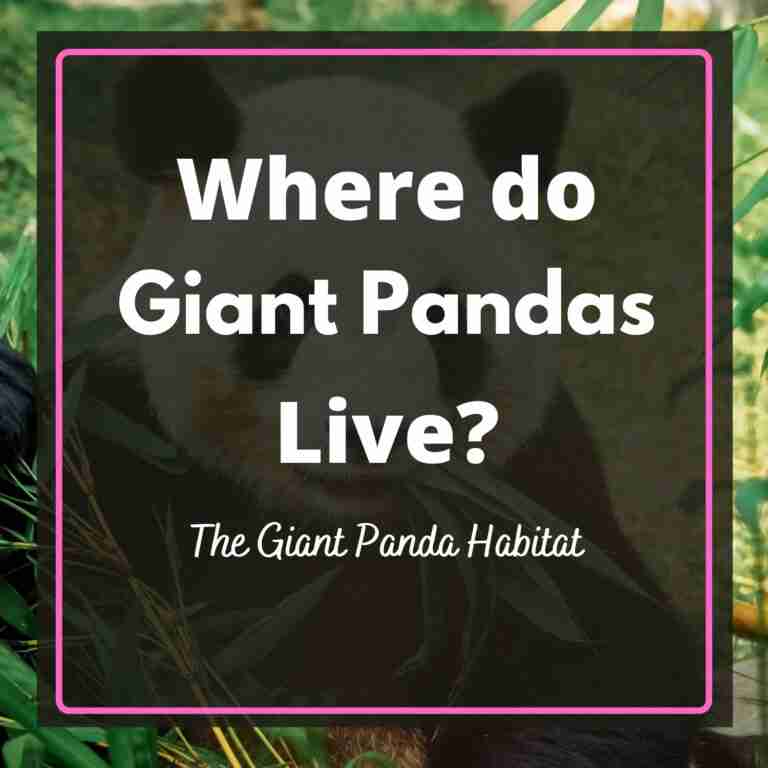 If you have noticed, most of the zoos around the world have a limited number of pandas. This is because pandas are not native in those places. If that’s the case, where do giant pandas live?

Well, it is no other than China, the land of giant pandas. There, more than a thousand of them live freely in the wild.

In addition, the Chinese government even provided institutions that will take care of the giant pandas. So, if you want close engagement with these cuddly and lovely animals, then go to China.

Does it sound interesting? Let’s know more about it in the article.

Where do giant pandas live?

Historically giant pandas live in Southern and Eastern China, as well as in neighboring Myanmar and Northern Vietnam.

Now, most of the giant pandas live solely in China. They are located around Central China, in the mountain ranges of Sichuan, Gansu, and Shaanxi provinces. The mountain ranges are known as the Min (Minshan) and Qin (Qinling) mountains.

Moreover, more than one thousand giant pandas are staying in the wild. With that being said, Sichuan province became known as the Home of the Giant Pandas. And it is not surprising to see pandas roaming around in the wild here.

Furthermore, some pandas live under human care. They are the ones that live in zoos or animal centers all around the world. Here are the places around the world where you are more likely to see giant pandas.

As an addition, the red pandas (the nearest relative of the giant pandas) live naturally in the Eastern Himalayas in places like China, Nepal, and Bhutan. There are some animal institutions like zoos and breeding centers around the world that take care of red pandas too.

In the wild, they live in the dense bamboo forests of Min and Qin mountains that are usually cool and wet. They stay in humid and relatively high places that are about 4,000 to 10,000 feet above sea level.

In captivity, they live in a restricted area, wherein they maintain the temperature so the pandas can live as normally as possible.

The captivities are also equipped with proper facilities that will cater to the needs of the giant pandas.

Furthermore, it includes a wide area for the pandas to roam around, a maternity den for the pregnant, storage of the food supply, and some even have a laboratory for further studies.

Take Note: Although giant pandas are known to be solitary animals, it has been proven that those living in the wild live shorter than those living under human care.

A giant panda in the wild lives for 14 to 20 years, but a panda under captivity can live up to 30 years.

Giant pandas love staying in a coniferous and broadleaf forest with a dense understory of bamboo because they spend their days mainly eating and resting.

They also love living alone in a forest with an elevation between 1,200 to 3,100 meters above sea level. Also, they are more likely to stay in a place that is shrouded by heavy clouds with torrential rain or dense mist.

In simple words, they need an elevated cool and wide area of bamboo forest. This is the ideal environment for them to live in. They can eat bamboo all day long and rest as long as they want, which is the usual daily routine of a giant panda.

Considering giant pandas are solitary animals, which means they are comfortable living alone, they cannot live peacefully together with other giant pandas.

If they have a small place to live in, they will more likely fight one another to rule over and establish their territory. That is why they need a wide place to live in.

Sadly, the continuous human invasion threatens their habitat. This was the reason why giant pandas were considered an endangered species before. It is very sad to imagine that we will not see giant pandas anymore.

However, with the continuous effort of the Chinese government together with the organizations like WWF and PI, they are now considered vulnerable species.

The best place to see giant pandas is also the place where they are native or naturally existing. Yes, you are right. It is in China.

Here are the top places to see giant pandas in China.

It is known to be the hometown of the giant pandas and the most popular for the tourists who love to see baby pandas. Chengdu Research Base of Giant Panda Breeding or merely Chengdu Panda Base was established in 1987.

It is a non-profit research and breeding facility for giant pandas and other rare animals. It started its undertaking with 6 giant pandas that were rescued from the wild.

Well-matched for: tourists who have limited time, and are only interested in seeing or holding pandas.

It is known for its best giant panda volunteer program. Dujiangyan Panda Base also known as China Conservation and Research Center for Giant Panda Dujiangyan Base is the main care, disease prevention, and control institution for giant pandas in the world.

It has the right climate and natural environment for giant pandas.

Well-matched for: visitors who want a less-crowded panda volunteer program

It is known to be the home of wild pandas. In 1980, Wolong Panda Center was placed on the United Nations Educational, Scientific and Cultural Organization (UNESCO).

It is a research and breeding center within the Wolong Nature Reserve. It is the earliest, largest, and best-known Giant Panda reserve in China.

Well-matched for: people who want to take part in the volunteer program (taking care of pandas)

It is known to be the most accessible but also the most crowded place to see pandas. The Beijing Zoo is a zoological park in Beijing, the capital of China.

It was founded in 1906 during the late Qing dynasty, it is the oldest zoo in China and the oldest public park in northern China. It is also a center of zoological research that studies and breeds rare animals from various continents.

Well-matched for: travelers who can’t make it to Chengdu.

If you have noticed most of the best places to see pandas are found in one place. That place is Sichuan province. It is not really surprising because as mentioned earlier it is considered to be the Home of the Giant Pandas.

Furthermore, the Chinese government spends millions on the conservation of giant pandas. This is how they value giant pandas. In fact, they consider them as national treasures.

Do giant pandas live in the rainforest?

Yes, they do. Pandas live in a rainforest. A rainforest is mostly surrounded by evergreen trees with a high amount of rainfall.

There are two types of rainforests, temperate and tropical. The bamboo forest of china is considered to be a temperate rainforest.

The bamboo rainforest is a special temperate rainforest that exists in China. This is also the main possible reason why giant pandas are native to China.

On the other hand, the red pandas live in both tropical and temperate rainforests.

Sadly, continuous deforestation threatens the natural habitat of the pandas. Although there are strict laws about it, still it continues. Good thing there are reforestation projects made for the welfare of the animals living in the wild.

Do giant pandas live in Africa?

No, because pandas are not native in Africa. Africa is very much known for its huge diversity in terms of wildlife. It has a wide range of tropical and temperate rainforests.

Considering the mentioned factors, can pandas live in Africa? The answer is yes. But the follow-up question is, will they live longer or survive for many years? The answer is uncertain, yet more likely is a no.

Here are the reasons why pandas cannot naturally survive in the African rainforests.

On the other hand, the red pandas may survive better under the care of an animal institution like the Johannesburg Zoo in South Africa than living in the wild. Always remember, there is a reason why these animals are endemic. It is not due to coincidence but rather natural existence. The best way we can do for them is to respect and protect the places where they exist.

Do giant pandas live in the tropical rainforest?

On the other hand, we should always keep in our mind that these animals are endemic. They can only naturally survive in the wild where they are native. We should not force them to live in areas where they cannot assure their survival.

Do giant pandas live in trees?

Yes, they do. Giant pandas create their dens from conifer trees. These dens are usually near the bamboo forest where they spend most of their time eating.

However, red pandas mostly spend their time in the trees, which is also where they eat and rest.

We can say how important trees are for the pandas. Sadly, the continuous illegal logging drives the panda away, which makes them endangered.

You learned in this article that giant pandas are native in Central China. It is also where the best places for interacting with pandas are located. It is truly a fun experience to do.

On the other hand, as we enjoy their company, we should always remember that giant pandas are also solitary animals too.

They are more comfortable living alone. Even if it is proven that they live longer under human care.

Just like in China, we can also do something for the endemic animals in our places. We should develop projects and establish strict regulations to protect them. In simple ways, we just have to respect their natural habitat and let them live freely without fear.