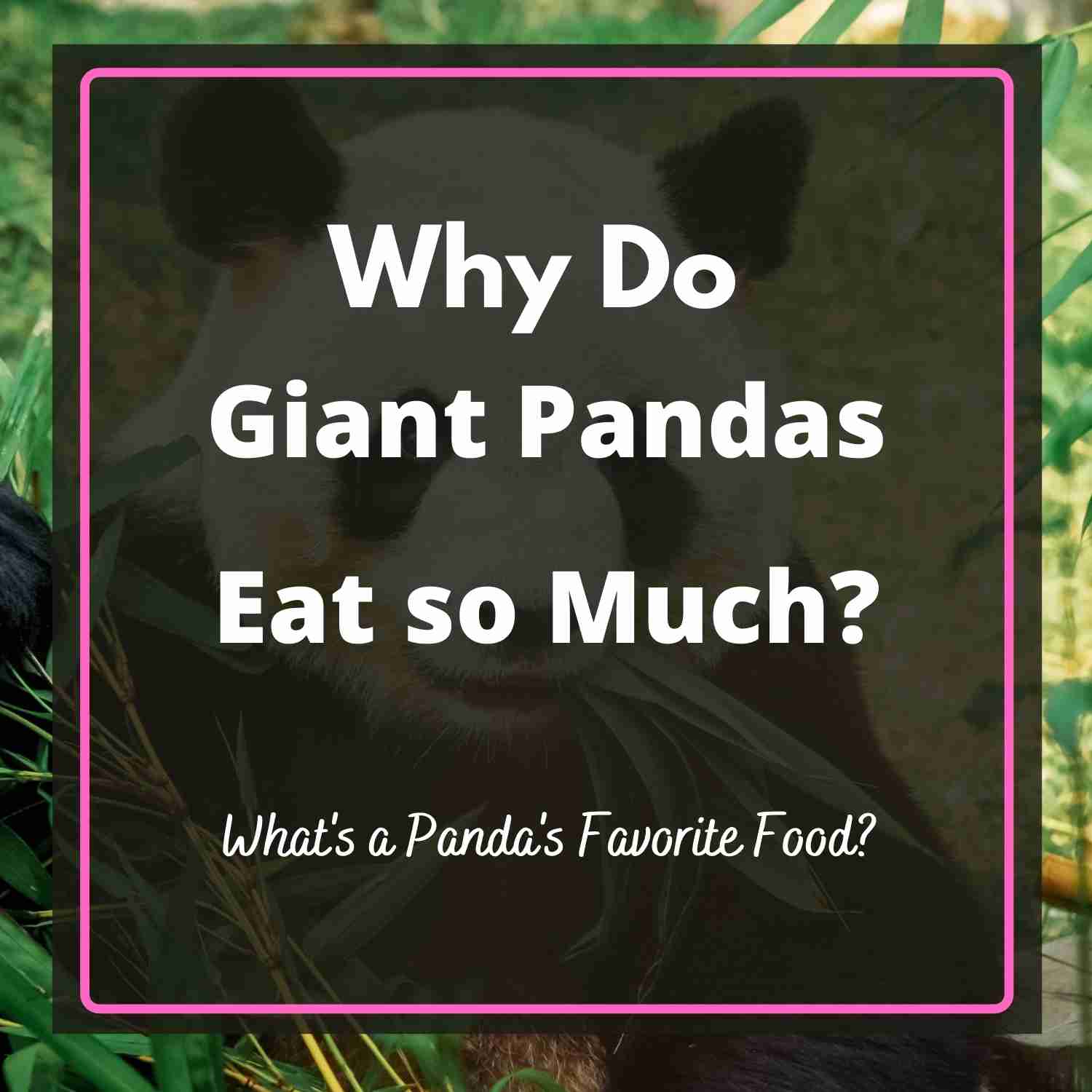 Here’s a short answer, giant pandas have to eat a lot because bamboo (their primary food) lacks nutrients. Have you ever wondered why they do this excessive eating behavior?

Well, there is something more to find out about it. In this article, we will talk about the reasons why giant pandas eat a lot every day. Sounds good? Let’s get into it.

How much time do pandas spend eating?

The estimated feeding time of a panda is about 10-16 hours per day. Yes, you read it right. They spend more or less half a day eating bamboo. The thing is, they have to eat a lot of it every day. Fortunately, there are several patches of bamboo understories, and they can grow anywhere.

Why do giant pandas eat so much?

Based on studies, the pandas eat so many bamboos because these tall grasses lack nutrients to sustain their healthy living. Nonetheless, the pandas mostly rely on this food to survive. Since they decided to become herbivores despite being bears, they have to adjust to it.

In this world, most wild animals rely on eating meat and a variety of plants. However, only a few chose bamboo to be their primary food source. These include giant pandas, red pandas, and a few that eat bamboo.

Due to the lack of natural competition, the pandas bears changed themselves to eat bamboo. It is also the reason that experts consider why giant pandas exist only in China. Simply because of the rich bamboo patches found at the Min and Qin mountains.

Why do giant pandas eat for many hours each day?

Unlike other plants, bamboo is very low in nutrients. Therefore, giant pandas have to eat a lot to make up for the lack of nutrients in their diet. And that is why they eat several times a day.

Furthermore, the giant pandas keep their eating and sleeping routine to maintain the proper nutrition their body needs. It is also the reason why they have lazy behavior. Often you will see the giant pandas anywhere near the bamboo forests. They are either enjoying their bamboo buffet or sleeping on the forest floor, rocks, or trees like they have no worries at all.

Which food does a giant panda usually eat most of the time?

It’s no other than bamboo. Pandas are bears that rely primarily on bamboo as their food source. They munch the bamboo from the leaves and stems down to roots and shoots. It is the only food that their stomach keeps on craving.

Moreover, there is less competition in eating bamboo. So pandas can enjoy eating a lot of it whenever they want to. We can also say that they are wise in choosing their food source. Simply because bamboos are abundantly growing, and only a few animals likes to feed on it.

As an addition, the giant pandas must eat 12-38 kg of bamboo every day to stay healthy. In sustaining their energy needs, they must keep a full digestive tract most of the time. The low or limited energy caused by a poor diet can affect the behavior of a giant panda.

How often do giant pandas eat?

Since pandas have to eat about 15% of their body weight, they have to eat a lot. That’s also why they poop 40 times a day. They keep on refilling their stomachs with bamboo. So it often happens that they poop not completely digested bamboo several times a day.

Furthermore, the average weight of a giant panda is about 150-250 pounds. As mentioned before, they need to eat about 15% of their body weight. If that is the case, then that would be 22.5 to 33.75 pounds of bamboo per day.

In this article, you learned that a giant panda has to spend a lot of time eating bamboo because it lacks the nutrients that its body needs. You knew that they need about 10-16 eating hours per day. Also, you learned that they eat about more or less four times a day to keep their digestive tract full all the time.

Eating is one of the most important things that we should do to survive. It gives us enough energy and strength to do what we should do. The same thing applies to all animals. They eat their food to survive. Just like how pandas keep on going, even if they do not easy eating routine to follow.

Did you find it very interesting? If you do, why not share it with your friends and spread awareness about pandas.