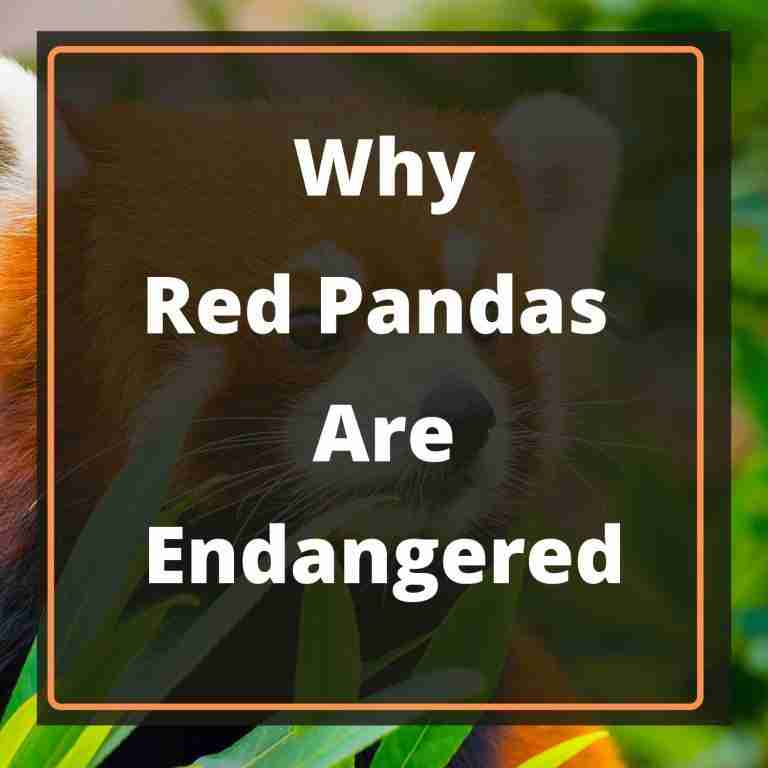 Red pandas have their natural homes in some other areas in Asia aside from China. However, this makes their population quite greater than giant pandas’ but are still at risk of extinction due to the dangers they face. However, in this article, we’ll be looking at 5 reasons why red pandas are endangered.

There are less than 10,000 of them left over the world and IUCN has listed them as endangered species. Of course, you might be wondering why these cute creatures are on the ”IUCN red list” which shows the endangered species and those likely to go extinct.

Moreover, let’s look at the reasons that keep them in the state they’re in today.

Habitat loss is common to most animals that are endangered and even extinct. This factor is also a major one that has kept red pandas in the state they’re in. These creatures have habitats that are unique to them.

In their habitat, they have lots of bamboo forest which is where they get their main food, bamboo, that they eat. This means no other habitat is okay for them to live in. When people cut down trees and bamboo stalks in their habitat, these creatures tend to lose shelter and food which are important for their survival.

Over the years, this lumbering activity has reduced the red panda population. Also, it’s important to know that just a small part of the forest that you cut can greatly decrease their population.

In addition, natives to such areas use red pandas’ habitat for farmlands. As places like China keep growing high in population, people normally create more shelters, and these red pandas habitats become the areas to build these houses for humans.

During mating season, it’s normal for animals to mate as long as a mature male and female are close. However, one interesting thing about red pandas is that they have this habit of choosing their mates.

More interestingly, breeding them in conservation centers like a zoo sometimes gets quite hard.

You can keep a male and female red panda together and they won’t mate. Moreover, this behavior makes the birth rate of red pandas poor; This is bad for them as their population keeps reducing.

Also, human activities divide them into different groups that are quite apart from each other. This way, they’ll end up breeding only within themselves and continue that way.

When this inbreeding keeps happening, these creatures will suffer from poor genetic diversity which will make them unhealthy and unable to survive well in their habitats.

Since the breeding keeps circulating only in such a group, they’ll only have common traits and even lack the ones that’ll help them survive. This is bad because poor genetic diversity will make the red pandas that keep on coming from such groups prone to certain diseases that arise. Also, they may find it hard to adapt to certain environmental factors.

This is one physical threat red pandas face in their habitats where they’re hunted illegally and sold in markets. The reason is that the people living in such areas believe red pandas have medicinal values and other precious qualities which makes many people want them a lot.

Also, their beautiful fur colors make people, especially from Bhutan, use them for hats. Some of them are caught alive and sold as pets to people that desire them.

Pet trade alone reduces their chances of survival as they’ll be taken to places that aren’t their natural home, put in a cage, and probably fed with foods that they don’t eat well.

However, with this kind of attitude from the natives, red pandas aren’t safe anymore as they keep reducing in population.

Most animals find it easy to adapt to other areas aside from their natural homes.  Taking a look at raccoons that are somewhat alike to red pandas, you’ll see them living fine in certain areas that aren’t native to them, like cities.

You’ll also find them eating from human leftovers other than what they eat in their habitats. This ability to adapt increases their chances of survival, especially when they lose their natural homes. However, red pandas aren’t like that at all.

They find it difficult to live outside their natural homes. It’s just like these homes are just for them only and that makes them unlikely to survive. Moreover, for these creatures that eat mainly bamboo, you won’t expect them to survive eating human leftovers as raccoons do.

In a red panda’s habitat, you’ll find other animals living in it, and hunting these animals is a common practice in such areas. Most traps that are set for other animals by natives close to red pandas’ habitat normally get most red pandas instead.

These traps kill most of them and when people find them alive on it, they don’t just let them go. Instead, they sell in markets where people buy them for different purposes.

Are Red Pandas Endangered in 2021?

Yes, presently, in 2021, red pandas are endangered. They’re still at risk of extinction as the threats to their habitats continue to reduce their population. However, despite the laws on animal poaching on red pandas, people still do it.

As conservation centers try to boost the population of these creatures, many factors, like the ones listed in this article, have kept doing the opposite. Most of them are human activities that have kept on going on despite how illegal it is and how bad it affects the survival of these cute creatures.

Are Red Pandas Endangered in 2020?

Red pandas were endangered in 2020 as their population kept reducing.  Studies in 2020, helped to prove that the red pandas living in China are different from those living in the Himalayas. However, they’re both endangered but not in the same way.

Moreover, these Himalayan red pandas are more endangered and need more care from humans. Also, they’re the species with the lesser population and their genetic diversity is poorer too.

Why are Red Pandas Hunted?

Natives of the area red pandas live in hunt them for their fur, especially to produce different cots, bags, and hats. The beauty of their fur makes them materials for these products.

Moreover, due to the cute nature of these creatures, most people desire to have them as pets in their homes and this makes people hunt them and sell them alive, especially in black markets.

However, you should know that hunting red pandas is illegal. Any person guilty of hunting and even selling or buying them has a fine to pay, about $1000, or will be put in jail for 10 years.

What Will Happen if Red Pandas Go Extinct?

Just like red pandas need bamboo to always be available for their survival, they also have natural predators that need them for food in order to survive too.

If red pandas go extinct, it will also affect these animals that depend on them. So, without them, the food chain will be imbalanced.

They are the only animals that represent their family of mammals, Ailuridae, around the world. Without them, the planet’s diversity will decrease. Being the only existing member of their family makes them special animals and natural heritage to the world. If they go extinct, there will be no other animal in that such family — They’re just irreplaceable!

In conclusion, many factors, especially human activities, are the reason why red pandas are endangered in the wild. Their population keeps reducing in a way that it’s hard to tell exactly how many they are in the wild.

However, Red Panda Network, WWF, and other panda organizations have been making serious efforts in conserving red pandas in the wild and also their habitats.

These organizations are working together with most people in these communities to protect these endangered creatures.

In addition, you can also monitor and create awareness of any threats you spot around their habitat. Donating to WWF is also another way to help save the red pandas.

Read more of our blogs on pandas and learn more about them. Moreover, if you like this article, you can also support the red pandas by sharing it with the world!