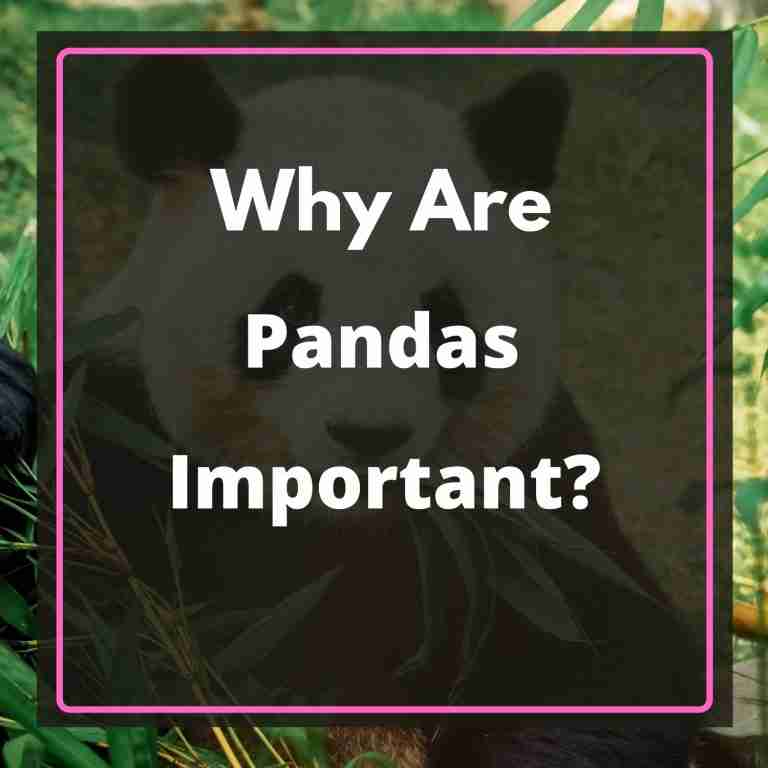 Pandas are lovable animals that eat bamboos all day long. In fact, the WWF is spending millions of dollars just to conserve them. This makes me wonder why are pandas important?

Here is a short answer, Pandas play an important role in the forest ecosystem where they live – From helping the vegetation to survive to provide habitat to other threatened and endangered species, and also provide income for the people who take care of them as well as attract tourists.

Not only are they are important to nature, but people also associate them with their emotions. The World Wildlife Fund (WWF) features Panda on its logo as a conservation symbol. It motivates to protect and conserve not only pandas but all the other endangered species.

Now that you have an idea about why Pandas are important, let us discuss why they are important in China, the country that is on the top of the list of countries donating for the conservation of Pandas.

Why Are Pandas Important in China?

Pandas are very important in Chinese culture. China always pops up in your mind when you think of a Panda. If you pay attention to the Chinese media, you get to hear a lot about the Giant Pandas. It is since Pandas have become the National Symbol of China.

Remember “Kung Fu Panda”? The Chinese people consider them Warriors, and they have also been declared strong as Tigers. As Pandas are tough animals, China wants to present itself the same way.

Besides symbolizing strength and power, they also symbolize peace and friendship. The black and white color of Panda is a physical representation of the Ying and Yang. And the balance between these two brings about harmony and peace.

Since ancient times, pandas and Chinese people have been living together. Hence they are seen as neighbors to them. They are also present in many works of Chinese literature.

Chinese people adore them. They consider it a symbol of good luck. Not just that, people used to hunt them as they believed that sleeping on a panda’s pelt helps fight off evil spirits and helps regulate a woman’s menstrual cycle. They also felt that drinking a panda’s urine helped to dissolve a swallowed needle.

Why Are Pandas Important to the Environment?

They play an important role in the environment that they live in. Bamboos provide them with food while pandas help in spreading their seeds. They are famous because they travel a lot. Bamboo seeds, as well as other seeds, get stuck on their bodies. On a long journey, they shed, which helps in the dispersal of seeds.

Not only that, pandas are one of the umbrella species, a concept in conservation biology. When efforts are being made to protect and conserve them, at the same time, these efforts indirectly help the conservation of other species too.

Moreover, they are hosts to various types of parasites. Most importantly, they convert plant mass into proteins and make it available to predators and scavengers.

Why Are Pandas Important to the World?

We have discussed that they are important to the environment, but what do they give to the world? The answer is not that simple.

They provide employment opportunities. Many caretakers in the zoo receive salaries because they take care of pandas. They also generate money for the country. How? Being cute, they attract thousands of tourists, and guess what? They are stars of many zoos around the globe, and the panda sanctuary is now a tourist attraction.

They help in spreading bamboo seeds, without which bamboos might become extinct. It is this bamboo that people use as fuel and also as a raw material in different industries.

Are Pandas Worth Saving?

Yes, they are worth saving because they are a part of the ecosystem. It is always worth it to prevent any part of nature from disappearing forever.

According to a new study, efforts put in to preserve the Giant Pandas are also helping to save other vulnerable species. Many species such as golden snub-nosed monkeys, takins, red pandas, and snow leopards are indeed sheltering under its umbrella.

The researchers found those species concentrated, especially in the areas where Pandas live. By focusing on protecting them alone, it is possible to protect other species at the same time.

How Can I Save the Pandas?

You can save them by protecting the bamboo forests, a major habitat of the Pandas. The loss of habitat caused a drop in the number of Pandas to just over 1200 in the 1980s. Because much bamboo is cut down every year to make paper, you can reduce the amount by using fewer paper products. If possible, try recycling the paper.

You can also contribute by donating to panda conservation projects. According to the World Wildlife Fund, donating $19 would buy film cartridges for infrared cameras to monitor giant pandas and other animals. $56 would be an expense for a ranger on a training course to help collect vital information about their habitat. $1,392 could save an injured giant panda.

You can donate now to help save them and conserve their habitat.

Why are Pandas Useless?

Although they lead a solitary life, it is a wrong assumption that pandas are useless. They are a part of nature, and nature has defined the use of everything. The poor ability to mate is just in captivity, while it works out without problems in the wild.

They have impressive physical strength, the ability to protect themselves, and a bite as strong as a lion’s. They are also excellent climbers. They appear goofy and cute as they crawl rather than walking around all day.

Do Pandas Help the Environment

Yes, pandas help the environment in many ways. They only eat bamboo, helping to keep the number balanced and prevent it from overgrowing. Besides, they help in the dispersal of seeds by spreading them through their droppings. They also help vegetation to grow.

What Would Happen If Pandas Went Extinct?

If pandas went extinct, there would be a noticeable reduction in bamboo forests. They are crucial to bamboo forests as they play a huge role in scattering seeds. Besides, there will be a chance of disrupting the food chain. The predators who feed on them would have no prey left to meet their hunger.

Pandas play an important role in conserving the forest ecosystem. They are also a symbol of strength, power, peace, and friendship. If they were to go extinct, our world would face a big loss. We should be proactive and do our best to help preserve these cute bears!

If you are curious to read more about the success in the conservation of pandas, you have to read whether they are endangered or not.