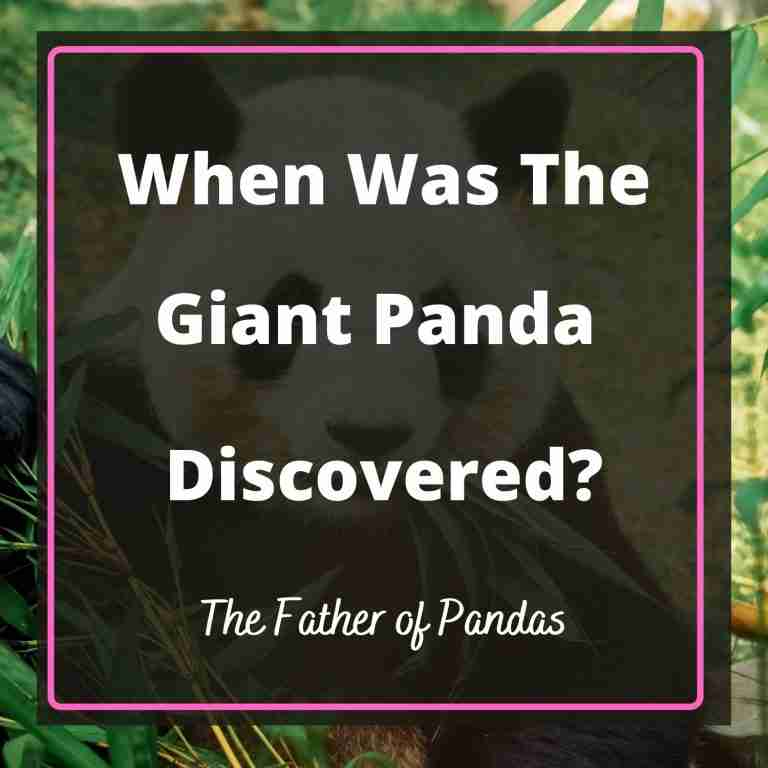 Like many people all today, especially panda lovers, you may have lots of questions about giant pandas. They are cute, cuddly creatures that create fun in their habitats. At a point you may have thought, when was the giant panda discovered?

Well, the first giant panda was discovered on April 1, 1869, by a priest who was living in Sichuan at that time. He found the beautiful creature, out of curiosity, after seeing a special black and white animal skin. Since then, a lot of giant pandas have been found in that area and moved to facilities in some parts of the world.

I’m glad you now know when the giant panda was discovered, but it is not enough. Has it ever crossed your mind that, who was the first person to discover pandas?

I’ll provide answers to these questions and others in this article.

Who Was the First Person to Discover Pandas?

Armand David, a French priest, botanist, and zoologist, was the first person to discover pandas. Being a botanist, David was sent on a mission to collect certain species of plants and animals in China. He planned to transfer the species to the Natural Museum of Natural History in Paris for identification.

Amazingly, David did not know he would become famous for a long time.

On March 11, 1869, still on his mission, the priest visited a stranger named Li Pinshan in Denchingou Village, Baoxing. Then he saw a white and black animal skin and was determined to find out where it came from.

Without wasting time, David asked some hunters to search Boaxing mountains and bring the animal with this skin to him. Luckily, on the 1st of April, 1869, David saw the first black and white bear in flesh and blood.

Immediately, he sent a message to the Natural Museum in Paris that he had found something of interest. He gave the creature a Latin name, “Ursus melanoleucus” which is translated in English as “black and white bear”.

Unfortunately, the “bear” died on the way to Paris, where zoologists wanted to perform research on it.

However, David sent its body to the museum in Paris and a study was conducted on it by Alphonse Milne-Edwards. In 1870, a paper was published describing the creature as a new animal species. Since then, inhabitants of Boaxing, China have seen more giant pandas coming out of the mountains.

In fact, Sichuan Province in China has become a popular location since then, thanks to the giant pandas!

If it wasn’t for Armand David, the giant pandas may not have been recognized.

Where was the First Giant Panda Found?

The first giant panda was found in Boaxing, Sichuan Province, China. To date, the place is often called “the hometown of the great panda”. As discussed earlier, Armand David found the animal in April 1869 and Alphonse Milne-Edwards named it.

Over the years, researchers, and tourists have visited China just to look at one of the wonders of nature – the giant pandas.

Where Did the Giant Panda Originate From?

Giant pandas originate from China. It was the place Armand David first discovered one of them. And from then till this present day, scores of giant pandas have been found in the country.

Now, all giant pandas in zoos across different countries were loaned from China. Tourists, inhabitants, and all panda lovers often visit the various zoos in China to see the giant pandas every year. Whenever you are in China and want to see giant pandas, visit the popular Chengdu Research Breeding Center or other zoos.

How Was the Giant Panda Discovered?

Giant pandas were discovered by their special black and white skin. Armand David, the french zoologist, and botanist noticed the panda skin at a villager’s house in China. He hired hunters to look for animals with similar skin.

Three weeks later, luck smiled on the hunters as they found the animal with the same black and white skin. But the creature didn’t make it alive to the Paris Museum, where David was taking it to. Regardless, the botanist sent its remains to the museum in Paris; since he was on a mission in China.

Alphonse Milne-Edwards, a zoologist at the National Museum in Paris, studied the skin and skeleton of the animal. In 1870, the zoologist published a paper where he concluded that the animal was a new species. He named it “Ailuropoda melanoleuca”.

Since then, the giant panda became popular, and a lot of them have been found in China.

Was the Red Panda Discovered Before the Giant Panda?

Based on the similar characteristics they share with the red panda, the giant pandas got their name.

Panda, the common name for red pandas and giant pandas, was derived from nigalya ponya, a Nepalese name for both animals. It means ‘bamboo footed.’

How Many Pandas Are Left In The World?

As of now, there are 1,800 pandas in the wild and 600 in captivity. Thanks to China, the panda population would have been lesser or even non-existent. By creating more habitats and putting laws in place against the illegal hunting of pandas, the animals’ lives were saved.

Formerly, the giant pandas were considered endangered species because of certain factors.

First, humans prey on them and also destroy their habitats for farming or building purposes. When this happens, the pandas’ bamboo diet can be destroyed, leaving them to starve to death.

Secondly, the giant pandas don’t reproduce as often as they should. It is a major challenge affecting their population besides the human factor.

To prevent the pandas from going extinct, the Chinese government made an effort to protect the pandas’ habitat.

In addition to this, they put in place a law preventing people from harming them. Also, breeding and research centers have been set up in China to help the giant pandas to reproduce.

Presently, the giant pandas are no longer endangered species. Nevertheless, the Chinese government is still actively involved in saving the lives of these creatures.

Where Do Pandas Live?

In the wild, pandas live in the mountains of southwestern China, where they survive mostly on bamboo.

However, in captivity, pandas live in breeding centers and zoos across various parts of the world. China’s reserve centers, which were set up to protect the lives of giant pandas, are currently more than sixty.

Apart from China, there are giant pandas in the National Zoo, Zoo Atlanta, and Memphis Zoo, all in the USA. A few countries have giant pandas too, but the cuddly animals were all loaned out from China.

Here is a summary of what we talked about in this article before you leave.

Keep in mind that the giant panda was discovered on the 1st of April 1869 by a French missionary, Armand David.

Being the first place that a panda was found, Boaxing in China is often called the “hometown of the giant panda”.

Remember that the giant panda was discovered because of its special black and white skin. Also, pandas are no longer endangered species.

Finally, giant pandas in the wild live in the mountains of southwestern China while those in captivity live in breeding centers and zoos.

Do you wish to learn more about the interesting life of pandas? Click here (Best of Panda Articles).