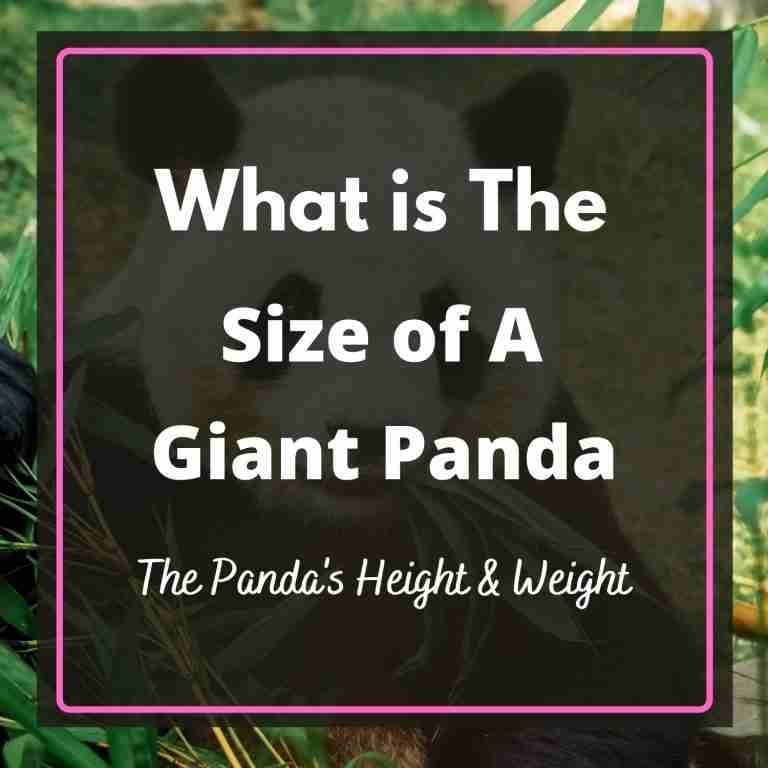 It seems like I want to cuddle a giant panda now. These lazy bunch, yet charismatic bears capture the heart of many, because of their huggable size. But, do you have any idea what the average size of a giant panda is?

The average body length of adult giant pandas is about 3 to 6 feet and roughly 180 to 265 lbs body mass. So, what are your thoughts on the average size of a giant panda? I think you already picture in your mind how big they really are, right?

Just continue reading and find out more about these lovable animals.

How Big Can A Giant Panda Get?

Well, an adult panda can actually grow up to 3 feet at the shoulder, 5 feet from nose to rump, and a 10-15 centimeters (less than a foot) tail. They weigh up to 275 pounds, male pandas are 10% larger and 20% heavier compared to female pandas.

Thinking about why they get big like this? Well, giant pandas are always hungry when they eat. Yes, they are impossible to satisfy.

Almost or should I say 99% of their daily diet is bamboo shoots and leaves. Although they eat so fast, they still spend 12-16 hours a day consuming approximately 28 pounds of bamboo (using their enlarged wrist bone) to satisfy their tummies.

This is because bamboo is not that nutritious. So, they need to eat a lot for them to stay healthy. Due to this, pandas defecate 40 times every day. Fun fact, right?

How Tall Is A Giant Panda?

Normally, a panda is 2 to 3 feet tall when on all four legs and roughly 4 to 6 feet long. Meaning to say, even the tallest pandas when stood on their two legs will still look shorter next to the tallest humans. Is it surprising?

Have you seen a zoo keeper sitting or standing next to a giant panda in a zoo? I know you will agree with me if I say that their difference in size is very noticeable.

Size Difference of a Male vs Female Pandas

Men on average are bigger and taller than females. This is a typical characteristic among mammals or in almost all of our domesticated animal species. Same goes for our pandas. Male and female pandas differ in size.

What Is The Size Of A Male Giant Panda?

Male giant pandas are a little longer than females, and are heavier like 10 to 20 percent. They also have stronger forelegs than females. Their length is about 6 feet (1.8 m). In terms of weight, male pandas are about 190 to 275 pounds (85 to 125 kilograms).

What Is The Size Of A Female Giant Panda?

I think it would be a great idea to compare the size of panda bears, grizzly bears and polar bears. The three are truly captivating species of bear. So, which do you think is heavier among the three?

You learned from the above information, the biggest male pandas are no more than 330 pounds. Well, male grizzlies can grow to be over 3 times that size! Is it surprising? How about grizzlies’ close cousins, the polar bears? Which one do you think is bigger?

It is actually interesting, because grizzlies and polar bears are almost of the same size and weight. Let’s see if you guess it right.

Adult female grizzly bears weigh approximately 287 to 397 pounds. On the other hand, the weight of female polar bears is about 331 to 551 pounds. But, overall female pandas are still the least in terms of weight, weighing 180 to 220 pounds on average.

On the other hand, adult female polar bears measure around 10 feet. Meanwhile, the body length of a grizzly female is approximately 7 feet. And, the female giant panda only measures about 5 feet in length.

Who will win: Panda Bear vs. Grizzly Bear vs. Polar Bear?

Polar bears will definitely win over the two. If there will be a tournament between these species of bears, I think our charming and cuddly pandas are simply not a match for any of these bears.

You’ve been able to reach this far; I think you find this article pretty interesting. Let’s see the cute babies of these captivating pandas. Keep on reading.

How Big Is A Baby Panda?

A typical newborn cub weighs 3-5 ounces, it resembles the size of a stick of butter. The cub size is 1/900th the size of its mother. They are pink in color, usually hairless, and unable to see and move.

But do not worry, because this will not stay permanently. They are able to open their eyes when they reach 6-8 weeks old and move when they are 3 months old.

Take Note: Excluding kangaroos and opossums, the panda cub is the smallest newborn mammal relative to its mother’s size? Yes, “cub” is what we call the young of bears.

Hold on, there are more captivating things about these cute babies. Cubs are very secured and safeguarded nearly 100% in their first month. They are resting on their mother’s front, and mother pandas used their paws, arm and head to cover them.

But of course, being a baby panda is not fun at all times. For, they are also expected to imitate their mother and learn how to look for food on their own.

The mother panda is teaching them how they will be able to survive on their own,because they will live their way when they are about 1½ and two years of age.

Yes, cubs are well loved by their mother pandas. But, there are rough times too! Especially when they over play. Cubs are very playful and full of energy particularly when hibernation has ended.

That’s why when mother pandas get irritated, baby pandas will get a hit from their mother’s paws! Ouch!

In this article, you have learned the real size of giant pandas. So on average, they can measure about 5 to 7 feet  in length, and have a mass of around 180 to 270 pounds. Also, you found out that pandas are heavier than humans on average.

Moreover, we have compared the sizes of panda bears, grizzly bears, and polar bears in this article, too. The same is true with the size of a newborn panda cub, which is very interesting, right?

Let’s always keep in mind that giant pandas and other animals deserve love, respect, and protection regardless of their size.

Here are some of the articles that might interest you.

How did you find this article? Is it informative and interesting? Don’t forget to share it with your friends.