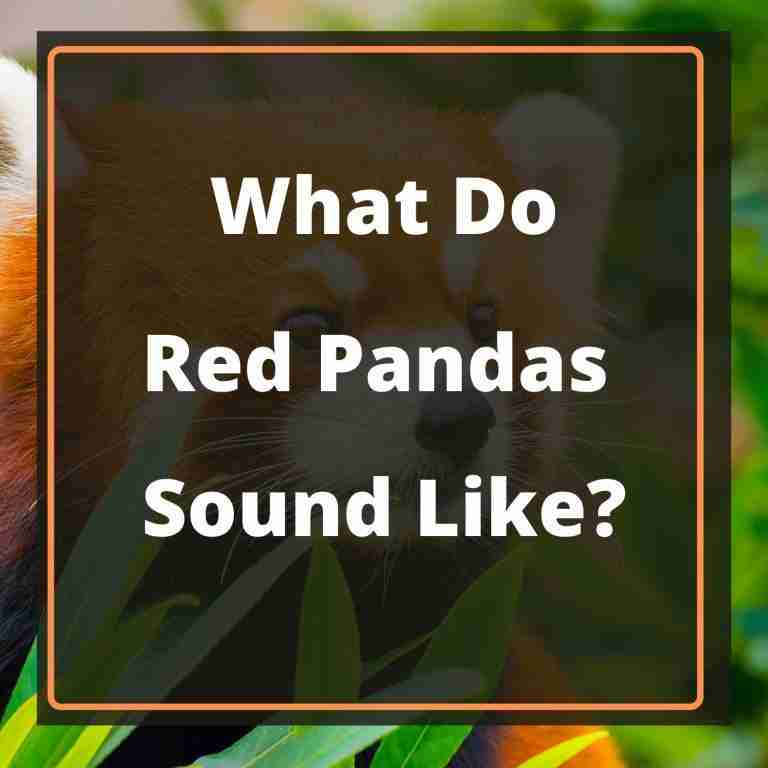 A red panda encounter is rare in the wild as they are nocturnal by habit and extremely shy. This bear-like animal is known to communicate through scent-marking noises. However, as it is difficult to catch a look at these bear-like animals or hear them communicate in the forest, doesn’t it raise curiosity? Have you asked yourself, “what do red pandas sound like?”

Red pandas make a wide range of noises for communication. The most common sound they make is a “growling” or “grunting” noise that sounds similar to a mixture of a pig’s snort and a duck’s quack. It is a sound they make when they get excited. The other noises they make are “bark”, “hoot”, “squeal”, “bleat”, and “Twitter”.

Clearly, red pandas make a variety of noises to communicate and express themselves. Though they make a lot of sounds, most of them are highly quiet.

Stay tuned to find out what other sounds the red pandas make during their daily life.

What is a Huff Quack?

Huff Quack is the sound red pandas make when they get excited. The sound is so-called as the noise sounds like a mix of a pig’s snorting noise and a duck’s quacking.

When a red panda fights or gets excited, they never groan like a giant panda. They generally make soft squealing noises. You might not even hear a huff quack sound in the wild as the pandas are really quiet. Apart from these noises, they communicate with their body language.

What Other Sounds do Red Pandas Make?

As mentioned earlier, red pandas make several sounds for communication. Each of these calls is very quiet. But they are distinct and denote different emotions and actions.

Red pandas make a high-pitched barking noise when they feel challenged or threatened. This sound is very similar to a dog’s bark, the only difference here is the pitch of the sound. Barking is also a way of alerting other pandas in the wild about a predator attack.

So, if you hear bark while passing through a forest, stay alert. You might catch a glance of a panda in the wild, who felt threatened by your presence in their habitat.

Red pandas sometimes make a hissing noise like raccoons. It is a call for a challenge when two pandas fight among themselves. Though these creatures are shy and quiet, the red pandas under captivity often make hissing noises at their handler during feeding or when they are unwell.

The grunting noise red pandas make, sound similar to the groaning noise made by giant pandas. Apart from barking and hissing, red pandas grunt when they feel threatened or simply scared.

A hoot is an alarm or warning call for red pandas. The noise sounds like the hoot of an owl. The sounds are so identical that often travelers mistake a hoot of a red panda for an owl’s cry.

Red pandas are known to bleat or twitter along with their scent marking habits during their mating season. It is a high-pitched mating call that the adult red pandas use for attracting their partners. Irrespective of the shrill noise they make, they manage to keep nature at peace.

Yes. Red pandas make a high-pitched groaning, barking noise when they face any danger or a threatening situation in the wild.

However, even their bark is quiet, and all you get to hear is quiet exhaling in most cases. They will only bark when there is danger. In most cases, we get red pandas in secluded and noise-free areas where there are fewer chances of threat. Hence, hearing them bark in the wild is rare.

They typically bark to alert other red pandas when they get preyed upon by snow leopards or similar big cats in the wild.

Yes. Being shy and solitary animals, red pandas generally remain quiet with mild vocalization. Though they make a wide variety of noises for communicating, they are mostly inaudible to the human ear.

Despite being quiet, naturalists sometimes refer to them as “firefoxes” because of their mysterious and elusive nature. They maintain silence in the forest and prefer to reside in peaceful thickly forested areas to stay hidden. To keep up with their reputation of being quiet, red pandas become active in the early mornings or late afternoons when the surroundings become quiet.

Red pandas are quiet, solitary animals that make many noises for communication along with head bobbing and scent marking. Though they don’t grunt like a giant panda or hiss like raccoons, they make a squealing noise as they get excited, that sounds like a mix of a pig’s snorting and duck’s quacking. This sound is common as the “huff quack.”

There are other variations of call, like bleating, twittering, barking, and more. Irrespective of the noises they make, these sounds are generally inaudible to human ears in the wild. Thus, we grow more curious about these adorable pandas.

If you found the article interesting, share it with your red panda lover friends.