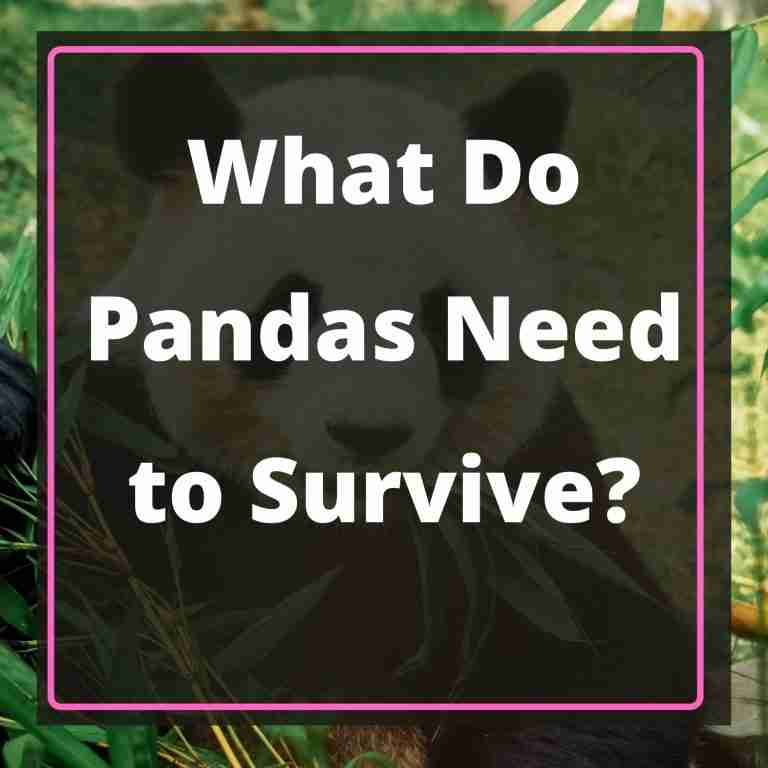 In the home of pandas, central China, you’ll find that giant pandas are very rare and their activities for survival unlike many other animals are few. Pandas are clumsy creatures. They fall down easily and roll, which makes me wonder, what do giant pandas need to survive?

Giant pandas need huge availability of bamboo forest and human support. They spend half a day eating bamboo as it has little nutrients and they need lots of it to remain healthy. These species of bears are the most endangered and survival is hard without humans protecting them.

Knowing this, we can tell that certain conditions are necessary for them to survive in their habitats and even in the wild. They stay alone doesn’t mean they can survive on their own. Let’s discuss more of this as we go deeper into this article.

What Conditions Do Pandas Need to Survive?

To Survive, a variety of bamboo or bamboo forest around them is the main thing they need. This is because they have no further activity they do to survive other than eating and sleeping all day. Also, their habitat should be an area that’s about 64 – 69°F in temperature, which is not a freezing cold one.

Moreover, these habitats don’t need to be isolated from one another which human activities do cause. These activities that use their lands can chase them to areas lacking their major bamboo diet making it hard for them to live. Although there are few pandas in conservation centers, the ones in the wild need help from humans, too.

So, instead of destroying their homes, we can protect them and help them survive.

What Do Giant Pandas Eat to Survive?

They eat at least two varieties of bamboo. Moreover, they need about 26 – 84 lbs of it daily to survive. The availability of food is the main condition for survival as if there’s no food, there’s no survival.

For a panda who eats mainly bamboo, despite having a carnivorous digestive system, there should be lots of it available in such an area where it stays. Even if such an area has little animals that pandas sometimes feed on and no bamboo, survival would be tough as feeding on these smaller animals would not meet a panda’s daily nutritional requirement.

How Do Pandas Survive in the Wild?

Here are ways Giant Panda survives in the wild:

Pandas in the wild need bamboo the most to feed on. Other foods like grasses or smaller animals can just add to their diet. To survive in the wild, their daily task is to search and eat food.

For a creature who can eat about 84 pounds of bamboo every day, a lack of a bamboo forest around them would be bad. With the availability of at least two species of bamboo around them, they can continue to survive. There must be the bamboos they can find and eat as it is their major food for survival.

They Stay Safe in Their Environment When Their Inactive

Whenever they’re inactive or sleepy, they climb high on trees to stay out of reach of any possible predator in the same area they’re in. Moreover, during the cold times, they search for hollow shelters, like caves, to rest.

Being Close Enough is ImportantImportant During Mating Times

Outside their natural habitat, breeding isn’t done well. Mating is hard and if by chance the females happen to be separated from the males during mating season by human activities, the chance of producing a young one has been wasted for that entire year as female pandas are only fertile for just 3 days in a year.

This is why they have a poor birth rate and this is most common in the wild. Out of every two cubs, the female pandas give birth to, only one survives due to the mothers’ behavior of selecting the stronger one and abandoning the other.

How to Help the Giant Panda Survive

Having understood what’s important for a giant panda to survive, we see that human support is not an exception. There are roles we could play and things we could do to ensure that pandas keep surviving.

Planting bamboo in areas where pandas normally stay is one way to help them, especially if there’s little or none available there.

We could map out places like panda reserves for only them that are free from human construction activities.

Also, finding ways to link separated panda habitats to each other so they could easily move from one habitat to another, especially during mating seasons

Creating laws that prevent human activities from destroying their habitat will surely go a long way in helping pandas too. So, instead of making them homeless with our developments, we can build a better environment for them to live in without trouble.

This is a non-governmental organization that helps protect wildlife, especially endangered species. Their acts of conserving pandas and limiting the negative effects of humans on their habitat help them survive so donations would help them continue the good work.

In summary, giant pandas need mainly their bamboo diet to survive and this should always be available for them wherever they stay.

It’s also clear that their survival cannot be easy without the help of humans as these animals are not common and multiply very slowly, especially in the wild. However, with the help of certain human means of conserving pandas today, the number of these cute creatures can be on a steady increase. Do not hesitate to share this article if it was helpful.