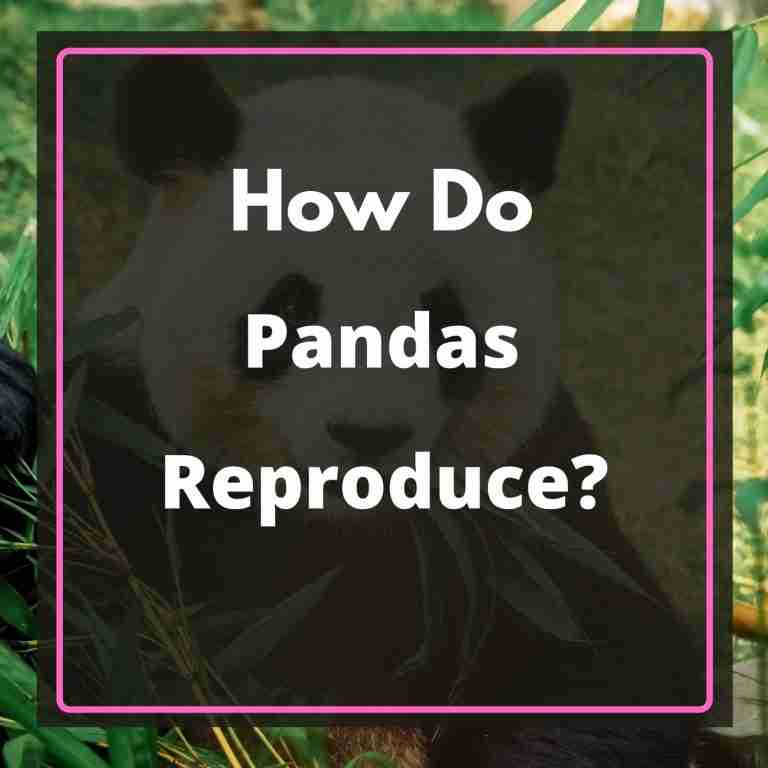 Generally, both humans and animals reproduce their young- this is one of the most important parts of life. Although some animals give birth while others lay eggs. But you may be wondering, how do pandas reproduce?

Just like most mammals, a male & female panda mate with each other and reproduce sexually. Usually, the female panda gives birth to one cub at a time but can give birth to two, sometimes. Unfortunately, the breeding rate of pandas’ is slow, which can make them go into extinction if care is not taken.

All you have to do is keep reading this article to have an educating and interesting moment. Now, let’s learn something new!

When Do Pandas Reproduce?

Usually, pandas reproduce in the spring between March and May. Due to their nature, the female pandas can only ovulate for 24 hours to 72 hours in a year. Regardless, their reproductive period runs for several months.

Where Do Pandas Reproduce?

Pandas reproduce in dens, which have been made with dry grass or give birth in hollow trees. Before the arrival of the cub(s), the female panda gathers dry grass to make a “house” for her newborn. Normally, the panda pregnancy period lasts for 95 to 160 days before the cubs are born in summer.

One surprising thing about the mother panda is that she prefers to take care of one cub at a time. In other words, if she gives birth to two cubs, the mother panda ignores one and focuses on the other. That’s a strange behavior among animals.

Focusing on one baby panda and leaving the other exposes the weak panda to the risk of predators, hunger, and death. This is one of the reasons pandas are going into extinction.

How Often Do Giant Pandas’ Reproduce?

Amazingly, giant pandas reproduce once a year. Unlike other animals, giant pandas can be considered poor breeders because of their reproductive performance. Due to their natural reproductive cycle, the female panda is only able to get pregnant within two to three days a year.

Both male and female pandas attract each other with their funny sounds and scents. Within 95 to 160 days of pregnancy, the female panda gives birth to her young. At most, the giant panda cubs stay with their mother for 3 years because they are usually helpless at birth.

Funnily, the baby giant pandas are always blind, unbelievably tiny, pink, and hairless. So, they have to depend completely on their mother for survival. Female pandas are ready to reproduce at 4 to 6 years while the males are sexually matured at 7 years.

Some people believe that the pandas’ poor reproductive life is caused by their bamboo diet that contains little nutrients. Others think it is because of the female pandas’ ovulation period which doesn’t exceed three days in a year. There’s a chance that these two beliefs are true.

How Often Do Red Pandas Reproduce?

Just like giant pandas, red pandas also reproduce once a year. Keep in mind that the red pandas are solitary animals; they prefer to be alone all day long. However, they relate with one another during the breeding period which is from January to April.

Red pandas mature sexually at 1 year and 6 months. By age 3, they are fully ready for breeding and can get pregnant within 2 days in a year. The female panda carries her pregnancy for approximately 132 days before giving birth.

Similar to the giant pandas, the female red panda builds her nest with twigs and dry grass in preparation for housing her babies. Mostly, she gives birth under a stump or hollow tree.

Most of the time, the mother red panda gives birth to two cubs at a time but can also give birth to four, sometimes.

From birth to 3 weeks, the cubs are usually blind, and deaf making them helpless. After 20 days or more, the cubs begin to gain their sight and hearing but still receive motherly care for close to 5 months. Baby red pandas spend 18 to 20 months with their mother before becoming independent.

Do Pandas Reproduce Asexually or Sexually?

Pandas reproduce sexually just like other mammals do. From March to May, which is their breeding period, both male and female pandas come together for the mating purpose.

Remember that pandas love spending all their time on trees and eating bamboo by themselves. But during the mating period, both male and female pandas come together to produce their young.

If there was ever a list for poor breeding animals, pandas would be at the top. Both male and female pandas hardly mate, and this is causing a gradual reduction in their population.

Presently, several breeding centers are making an effort, through the use of technology, to improve reproduction among pandas.

Why Do Pandas Have a Hard Time Mating?

Compared to other animals, pandas don’t mate as often as they should.

Here are the 3 possible reasons

If there are no male pandas around within this period, chances of mating and reproduction that year will be slim.

Funnily, male pandas don’t know how to mount the females correctly while mating. The small sexual organ of the male pandas may contribute to this mating difficulty.

In captivity, zookeepers have no other choice but to use artificial methods of reproduction. Without this method, the panda population may continue to reduce every year.

A study in 2015 shows that female pandas are picky when it comes to choosing mates. There is a high chance that a female panda will mate with the male she likes and even produce and care for her young. This is easy to achieve in the wild.

However, if a female panda is in captivity, filled with male pandas she doesn’t like, the chances of mating will be little to none.

All these reasons contribute to mating difficulty in pandas. And that’s why the panda population is not as large as that of other animals.

No, pandas are not asexual because both males and females engage in sexual relations to reproduce. Although pandas are solitary animals and hardly mate, yet, they come together during the mating season to produce young ones.

Why Do Baby Pandas Die So Easily?

During the first few weeks of life, baby pandas are always so tiny and weak. They are usually blind, deaf, and unable to move around. Without enough care and nutrition, the cubs are at risk of dying from malnutrition, predators, or health problems.

Other times, the mother panda may kill their babies accidentally. Compared to their mothers’ size, the baby pandas are usually so small at birth. Being clumsy and their habit of rolling around a lot is also a major reason giant pandas unintentionally harm their babies.

How Many Babies Can a Panda Have at Once?

Commonly, pandas give birth to two babies at once but only one of them survives most of the time. After giving birth to her young, the mother panda takes care of one of the babies while leaving the other. Since the cubs are usually weak, small, blind, and deaf at birth, the one without care will most likely die.

All we’ve discussed in this article is that pandas are unique in the area of reproduction. While the female pandas can reproduce once a year, the males are ignorant in the mating game. That’s why most breeding facilities use artificial methods of reproduction for these panda bears.

Also, we mentioned that giant pandas and red pandas give birth once a year to tiny babies that need motherly care.

All animals are special in their ways, including pandas. Being poor in reproduction doesn’t make them lesser, in any way, than the other animals.