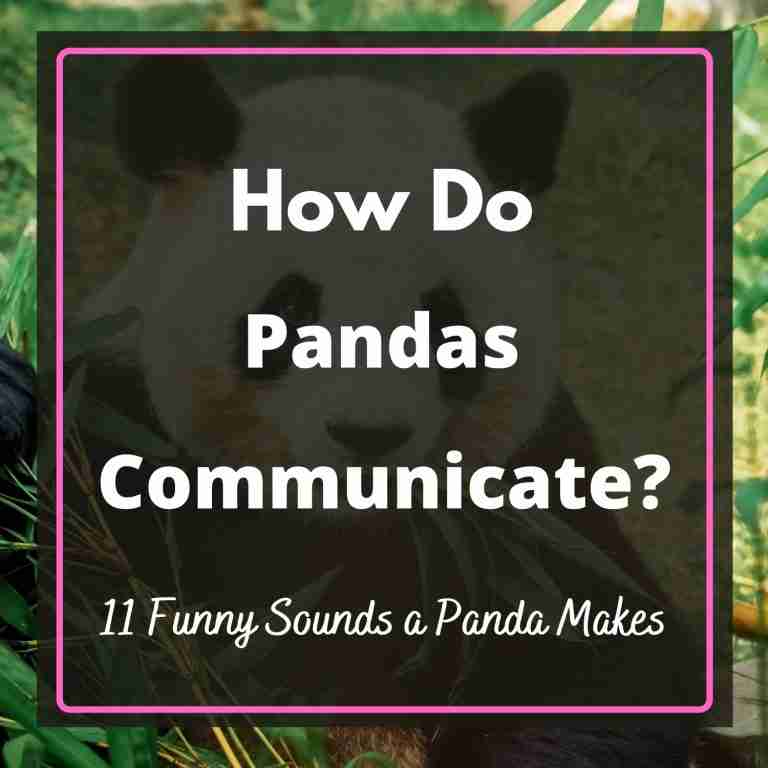 If you’re watching the cartoon We Bare Bears, Panda loves to talk to his brothers (Grizz and Ice Bear) all the time. He likes to play, have fun or even go out with them. This made me wonder, how do pandas communicate in real life?

Here’s a short answer, Pandas usually communicate by scent marking and vocalization. They can only do these because they can’t make any facial expressions. The pandas use a variety of sounds to communicate with each other, they may honk, huff, bark, and growl.

Now that you know that pandas use scent and sound to communicate, your next question may be what kind of sounds do pandas produce? Let us discuss the ways pandas use to communicate in detail.

What Kinds of Sounds or Call Do Pandas Make?

Pandas use more than 11 different sounds to communicate. Here are the most common ones.

This is considered a friendly vocalization, and they use it a lot in the breeding season. Sometimes they are single, short bleats, and sometimes they are drawn out, just like the sound sheep makes. Pandas also bleat to attract babies’ attention and other times to tell zookeepers that they are hungry.

This is a rhythmic, sort of hiccup sound that pandas produce during stressful conditions.

They also produce a dog-like barking noise mixed with a howling roar during the non-breeding season, telling other bears to back off.

These are deep, high-pitched sounds they make as breeding season approaches. They moan, walking around their pen as other pandas pass by.

It isn’t a friendly vocalization and neither an overly aggressive one, as they moan nonchalantly. They also moan when they are dozing off for a nap.

These are short and high-pitched calls like a bird. Pandas often chirp, directing other pandas when they are interested in them. A chirp response is a positive sign of potential mating.

These were the most common sounds pandas produce.

Why Do Pandas Communicate?

Pandas are usually quiet and solitary animals. They like to stay out of each other’s way and avoid direct contact with each other. They live in the wild with very dense vegetation, and each panda roams an area of 6 to 10 square kilometers, which is very large.

There are fewer chances that they meet another panda on their way. The pandas leave their odor marks, as well as claw marks, on trees and rocks that happen to be on their way. So that any other panda that passes by detects the odor.

Pandas’ scent marks embody a lot of information. It shows their gender, height, reproductive status, and et cetera. Male pandas often mark odor as high as possible to tell others they are relatively tall. They do all this so that other pandas detect them and if they are in the mating season, then mate.

Giant pandas usually vocalize when playing. They become very vocal in mating season and express all their shades of mood from amorous to angry via detailed vocalizations.

Where Do Pandas Communicate?

Pandas live in high mountainous regions where they communicate during the mating season. Their habitat contains natural forested areas of fir, spruce, and bamboo. They scent mark the trees to let other bears know they are ready for mating.

According to a study on Scent communication behavior by giant pandas, pandas mostly scent mark Faxon fir trees, which accounted for 60% of the marked trees, followed by Chinese Hemlock accounting for 14.3% of the total number of marked trees. The commonly selected trees were located on ridges accounting for 19.7%, whereas non-ridge was 11.4%.

How Do Giant Pandas Communicate?

Pandas can only communicate via vocalization and scent marking. They can also use their body gestures to express anger or obedience. They do not have crests or manes to stand upright, and they have stubby ears. Due to these limitations, they cannot make any facial expressions.

An interesting fact! Pandas produce specific sounds to express their feelings. Although complicated, it is still interesting to learn about how pandas communicate.

She does this to advertise that she is in heat and also, to mark her territory. The scent mark tells other pandas about the gender, age, mood, and reproductive status of pandas. A panda scent marks in different positions, including a headstand, leg cock, or squatting.

Besides scent marking, giant pandas also communicate vocally. They bark to frighten other pandas. A mating pair makes a goat-like bleating sound in the reproductive period. They use up to 11 different sounds to communicate. It includes bleating and honking, huffing, barking, and growling sounds.

Pandas also use body language to communicate. Aggressive pandas often bounce their head, showcasing their eyes and ears, whereas submissive pandas hide their eyes by their paws or turn their heads sideways.

How Does a Red Panda Communicate?

Red pandas are quiet animals, but the main communication channels are acoustics, visual, chemical, and tactile. The red pandas have unique eye tracts and forehead patterns, which help in recognizing them. They mark their territories with urine and feces.

They rub their anogenital gland secretions on rocks and raised sticks, which function as scent marking. Besides, they also use vocal communications. Roberts discovered seven different vocals in 1981. They whistle, snort, squeal, bleat, exhale, and quack-snort.

How Do Pandas Communicate with Humans?

With humans, pandas communicate via vocalization and gestures.  They jump forward and fight to show aggression. While non-aggressive behavior includes turning heads and covering the face and muzzle with paws.

They sometimes respond, in their own language, when the keeper talks to them. They also cuddle with their keepers, with whom they develop close interactions.

Most of the information we have discovered about the pandas is because of human interaction with them. But they may develop significant, although temporary and highly conditional, relationships with humans.

How Do Pandas Communicate with Other Species?

Giant pandas don’t usually interact with other animals. It’s only when they feel threatened that they stare at other animals or signal threat via vocalization. Golden monkeys, takin, red pandas, Asiatic black bears, and pheasants live in their vicinity.

In a zoo, where they are in captivity, they like to play and fight each other.

No, pandas can talk like humans. But they do communicate in their own unique ways. They also respond when someone talks to them.

Only other pandas and animals of their kind are successful in interpreting their language. If technology advances, humans may be able to communicate with pandas too.

Why Do Pandas Make a Honking Sound?

Pandas make a puffing sound of distress that is also referred to as honking. They use the honking sound if they get surprised, angry, or annoyed. Some pandas honk when they are asleep

Do Pandas Interact with Humans?

No, pandas do not interact with humans. They live in the wild and are not very friendly. They like to live alone. Pandas can be very dangerous. On the contrary, pandas living in the zoo are found to interact to a great extent with their keepers and caretakers.

They hide their face with their paws when they meet someone new. They even respond when their keepers talk to them.

Cute giant pandas are so compelling but have their quirky communication ways. To conclude, they use vocalization, different gestures, and scent marking to communicate with their own kinds.

They develop close relations with humans, but that is only with the zookeepers and caretakers. You cannot expect a giant panda to make best friends with you on your first meeting. Since they are solitary animals, they do not interact with other species. It is only when they feel threatened that they do so.

If you want to know more facts about giant pandas, you should check out our 29 Most Adorable Giant Panda Fun Facts.