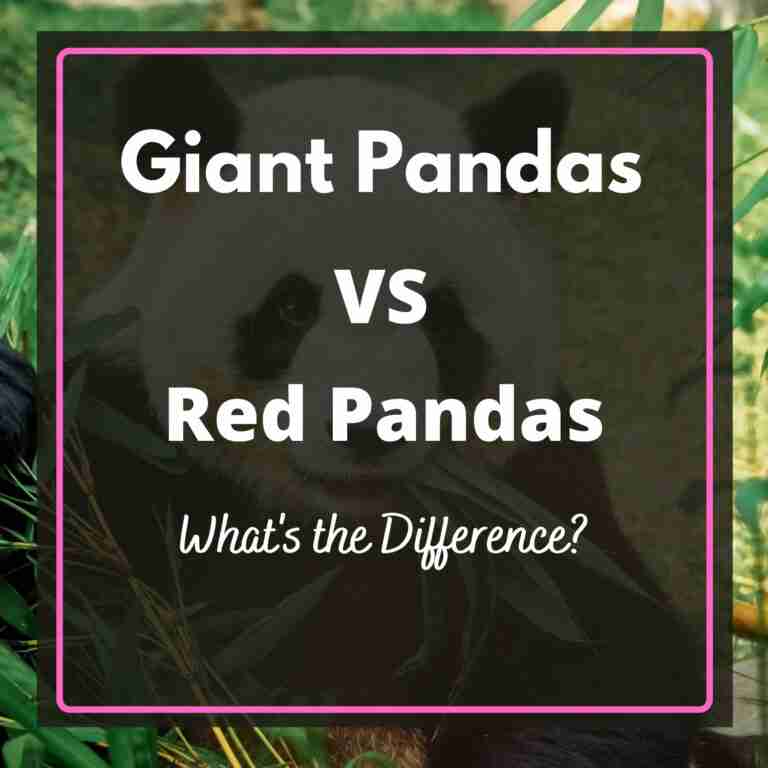 Two days ago, I saw a YouTube video of pandas playing in the zoo. Amazingly, it was a sight to behold. Then, I began to wonder, what’s the difference between giant pandas and red pandas?

Here’s what I found out – Giant pandas and red pandas are different in terms of their name, appearance, diet, behavior, and habitat.

If you’ve been looking for differences between giant pandas and red pandas, you are at the right place.

In this article, I’ll provide a detailed explanation for why these two cute creatures differ in a lot of ways. Now, let’s take a look at the difference between giant pandas and red pandas.

Despite their similar names, don’t be surprised that the giant panda and the red panda are not related. I know this may sound unbelievable, but it’s the truth. While the giant panda belongs to the Ursidae family, which is classified as bears, the .

Several years back, western taxonomists considered red pandas as part of raccoons. That’s understandable because the only difference between these creatures and raccoons are their tails. In later years, the giant pandas were classified to be similar to red pandas.

However, further studies revealed that even though the two animals share similar features, they belonged to different families. When next you go to the zoo, take a closer look at the way giant pandas and red pandas behave, you’ll discover they share similar characteristics.

Studies about this phenomenon, which is called “convergent evolution” has shown that the giant panda and red panda share a common ancestor.

To gain better understanding of these studies, let’s take a look at what convergent evolution means. Scientists have revealed that organisms that are not closely related can develop similar characteristics due to adaptation to the same environments. They can share the same body, organs, colors and bones.

Apart from giant pandas and red pandas, another example of convergent evolution is sharks and dolphins. Even though the two animals are not related, they look alike.

There are certain features you’ll notice in the giant panda that are absent in the red panda. Let’s examine their skin color and size.

If you’ve seen a bear before, identifying a giant panda wouldn’t be difficult. Apart from their bear-like appearance, they have snowy white and black furs. No doubt, giant pandas are cute creatures but they are not friendly.

Identifying a red panda should not be difficult if you’ve seen a raccoon before. Apart from their long cat-like tails, red pandas look like raccoons. They also have reddish-brown furs.

Compared to the size of giant pandas, red pandas are unbelievably small. Let’s assume the two animals are placed beside each other, this means red pandas will look like mice. That’s hilarious!

Even though giant pandas eat other foods such as insects, mushrooms, fruit and meat, their favorite diet is bamboo. While living in the wild, they can survive on bamboo each day without insects and other foods.

However, their diet can be a little different when in captivity. They sometimes feed on vegetables, fruits and panda cakes.

Although the giant panda and red panda share certain behavioral traits, they differ in some ways. Let’s take a look at their lifestyle and reproduction.

Giant pandas are solitary animals. Even though they climb trees perfectly and can swim excellently, they prefer being by themselves with no disturbance.

Due to their diet, which contains little to no nutrition, giant pandas don’t like using up their energy. They make strange sounds to communicate, like the red pandas. During the cold seasons, they always move to the valley, where the weather is warmer.

Like the giant pandas, red pandas are solitary animals. They rarely move around, except during the mating season and at night to seek food. During the day, they sleep in trees and sometimes make funny sounds to communicate with one another, while awake.

Just like other mammals, red pandas don’t like it when the temperature is too hot or cold. Often, they curl their body to keep warm during the cold season and stretch on a tree when the weather is hot.

At age 4 to 6, the giant pandas are sexually mature. Unfortunately, female pandas can only get pregnant once for two to three days a year, from March to May (Spring). And that’s why their population keeps decreasing every year. Usually, the male pandas are attracted to the females by their scents and sound.

After mating, the female panda separates from the male to prepare for her cubs. One thing you should know about the female panda is that she can be selective when it comes to choosing a mate. She’ll likely prefer the male she has been with than a new one. The pregnancy period of a female panda lasts for 3 to 5 months.

In the late summer (August), the cubs are born and kept safe in natural dens, made from leaves and grass by the mother giant panda, or in hollow trees. One strange thing about the female giant panda is that, even if she gives birth to two cubs, she prefers to take care of one while abandoning the other. Isn’t that surprising?

In terms of reproduction, red pandas mature sexually at 1 year and 6 months. By age 3, they are fully sexually mature. During their mating seasons, which runs from January to March, the sexually mature pandas have relations with several partners. The female panda carries its pregnancy from 112 to 158 days.

Before delivering her babies, the female red panda builds her nest with leaves and dry grass in preparation for housing the cubs. Usually, the mother red panda gives birth to one to four blind and deaf cubs. At this stage, the cubs are helpless but gain their sight and hearing around 20 days after birth.

Giant pandas live in bamboo forests on high mountains. Their only remaining habitat is on the Eastern edge of West China, Gansu provinces.

On the other hand, red pandas live in China, Bhutan and Nepal, which are all Eastern Himalayas. You’ll find them hanging around trees, most of the time.

What Do Red Pandas and Giant Pandas Have In Common?

Although giant pandas and red pandas have a lot of differences, they both share similar features. In the aspect of feeding, the two creatures enjoy eating bamboo and have similar false thumbs that make grabbing the plant easy.

Another similarity between the two animals is that they live a solitary life. Both animals don’t like to engage in stressful activities, maybe because of their diet, which contains little to no nutrition.

Why are Red Pandas Not a Panda?

Surprisingly, red pandas are not pandas, despite their name. Fifteen years ago, scientists have been able to prove that these adorable animals were members of the “Arcotoidea”. This means that red pandas belong to the same group as bears, raccoons, and mustelids.

When you take a closer look at them, they share a striking resemblance with raccoons than giant pandas.

As we’ve discussed throughout this article, giant pandas and red pandas are different in several ways. It includes size, family, habitat, reproduction, behavior, appearance and feeding. However, they also share similar features, in terms of solitary lifestyle and feeding on bamboo.

Keep in mind that both giant pandas and red pandas are cute creatures, but they are not appropriate as pets. And this is because they can be dangerous.

You might want to take a look at these cute creatures from afar, when next you see them because looks can be deceiving.