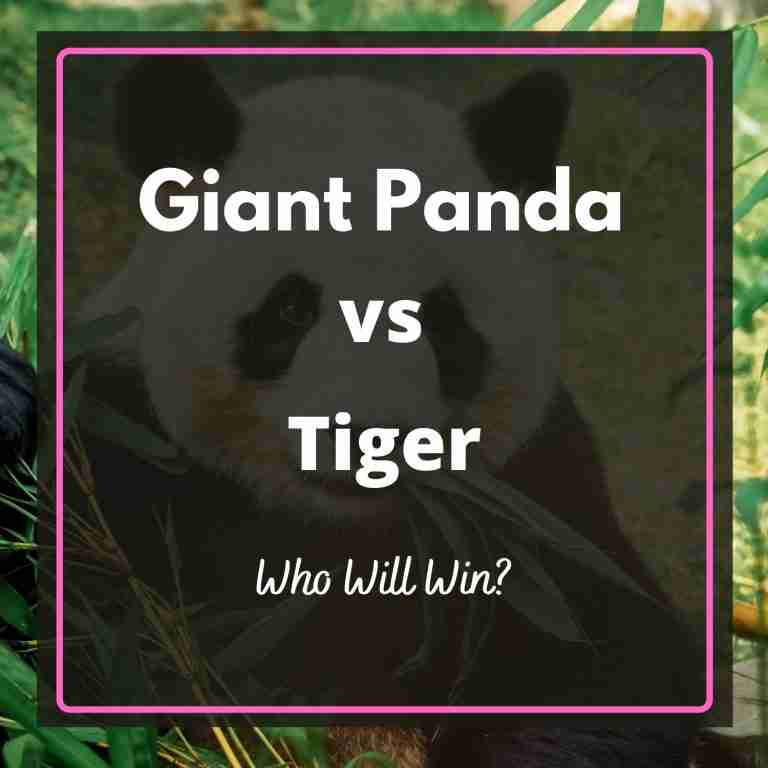 Tigers are the queens of plains and are feared the most in jungles. On the other hand, giant pandas are considered pretty peaceful in nature. But the question is in a duel between giant panda vs. tiger: who will win?

Tigers are opportunistic predators – that means they will hunt on any animal whenever they think there is a chance. Therefore, tigers can definitely attack giant pandas. If a giant panda comes face-to-face with the tiger, the tiger will definitely win – because of it’s fierce nature.

You may be wondering, how did I say that a tiger will more likely win? Let’s compare their abilities below and find out more!

If the tiger decides to fight, he will definitely win. However, they are opportunistic animals, and they do not put themselves in a real fight. Instead, they attack only when they are sure of winning.

Let’s consider some of the aspects that might help both of the animals to win a fair fight.

Tigers are kind of bigger in size as compared to giant pandas. Therefore, if we talk about this aspect, giant pandas will not be able to overpower the tigers because of their size.

Tigers are clearly the winners especially keeping the size in mind! With this size in mind, it is quite clear that it would be very easy for the tigers to win a conflict quite easily.

Giant pandas can reach the maximum weight of about 150 kg (330 lbs). However tigers weigh as much as 310 kg (680 lbs), which is almost double the weight of an adult giant panda!

The giant panda diet mostly depends on bamboo. Although, giant pandas are quite heavier as we consider their weight with regards to humans. However, if we talk about a tiger, the case is totally different.

Well, much to your surprise, tigers are heavier than giant pandas.

Tigers would be the winner because they are heavier in weight than giant pandas. This definitely gives them the advantage in a fight between giant pandas and tigers.

As far as speed is concerned, pandas can run at a speed of 20 miles per hour. On the other hand, tigers are pretty quick and cunning in their moves, with an average speed of 40 miles per hour.

Despite being carnivorous, Giant pandas feed on bamboo stalks and leaves, which makes them sluggish and slow. This is because they cannot get enough proteins in their diet, so their movements are not that fast.

Tigers can quickly seize giant pandas and tear them into pieces. If it comes to running from a fight, they can pretty much run from it to attack from a different direction.

Tigers will win because the quick reflexes and faster speed of tigers allow them to have an upper edge in a fight.

Although giant pandas are peaceful in nature, we can’t say that they are not strong. Giant Pandas have the strength and a bite force of 2603.47 newtons to crack bones and tear the flesh of other animals.

On the other hand, with a bite force of around 1,050 psi, tigers bite harder than giant pandas.  With the speed and haste of the tigers, there comes the strength that it takes to attack different animals.

Together with strength and responsiveness, tigers can outshine any other animal in the arena or in the zoo. Hence, this is the point where we can hope for a fair fight between a giant panda and a tiger!

Tigers are definitely going to win because of their much higher bite force than giant pandas.

Now, this is the interesting part where we’ll learn about the capabilities of tigers and giant pandas. Let’s have a talk about wit and intelligence.

Generally speaking, both giant pandas and tigers have the ability to sense danger and respond in moments of crisis.

However, if we talk about the tiger particularly, tigers are blessed with superhero capabilities.

Speaking of the giant pandas, they have the following capabilities:

Keeping all these considerations in mind, it’s quite evident that tigers can easily win a fight over a giant panda. However, if the tiger is not very active and decides not to fight back, there is a fair chance for a giant panda to win!

Do Tigers Prey on Pandas?

Yes, they do. As we talked about it earlier, tigers are opportunistic predators – that means they attack whenever there is a chance. They will definitely prey on pandas and attack them hard. Giant pandas might not fight back in many instances.

However, they will try their best not to get into such a conflict.

How Do Giant Pandas Defend Themselves?

Giant pandas have very good sensory capabilities that would allow them to escape from an attack. They can smell other animals or hear the rustling of leaves from far-off areas. This helps them to get attentive and escape.

Alternatively, they possess very sharp and strong teeth that they can use to bite the predator. This gives them a very good opportunity to defend and attack other animals.

Do Pandas Prey on Tigers?

No, giant pandas do not intentionally prey on tigers. They are peace-loving animals and would rather feed on bamboo than prey tigers or other animals. This is one of the basic reasons why giant pandas turned herbivorous – so that they don’t have to get into the “fight.”

However, if they are cornered into a fight, giant pandas may actually prey on them. This is because giant pandas are very large animals, and their size and strength are quite comparable.

Yes, tigers do eat pandas if they get the chance. They are opportunistic predators that attack when they find the chance and tend to attack any animal that they find an easy target.

Since giant pandas are slow and lazy, they are an easy target for the ferocious tigers.

Although giant pandas don’t make the killings, they definitely can! They have very sharp teeth to tear away the flesh and crack bones of other animals. However, they mostly avoid such situations, but they might go on hunting some small animals such as lizards, squirrels, and rats once in a while.

What Animal Can Kill a Tiger?

If you think that tigers can’t be put down, you are wrong. Many herbivorous animals can kill a tiger if they are relatively very big in size. For example, elephants, rhinos, and hippos can kill a tiger.

On the other hand, brown bears, polar bears, and giant pandas can get into a head-on fight with a tiger, and there is a 50% chance of either of them winning!

Can a Panda Kill a Gorilla?

Giant pandas can’t kill a gorilla. In a one-to-one fight, the giant panda can definitely fight because of the fact that it is a carnivorous animal. Its sharp teeth and strong claws help to overpower the gorilla quite easily.

However, gorillas are sharp and witty animals. They take some really smart moves and manage to get over the giant panda. Hence, they will definitely win!

The giant panda and tiger fight can be very interesting. But nonetheless, tigers will win the duel against giant pandas! In the forest, when both of the animals have a fair chance to use their capabilities, things can get pretty nasty. Neither of them would back down, and there are equal chances of them overpowering one another.

So, giant panda vs. tiger: who will win? A tiger might probably win the duel because he is stronger, and has sharper abilities! If you want to learn more about giant pandas and their lifestyle, you can read more about them in our blog section.

Recommended Reading: Giant Panda vs Black Bear: Who Will Win?