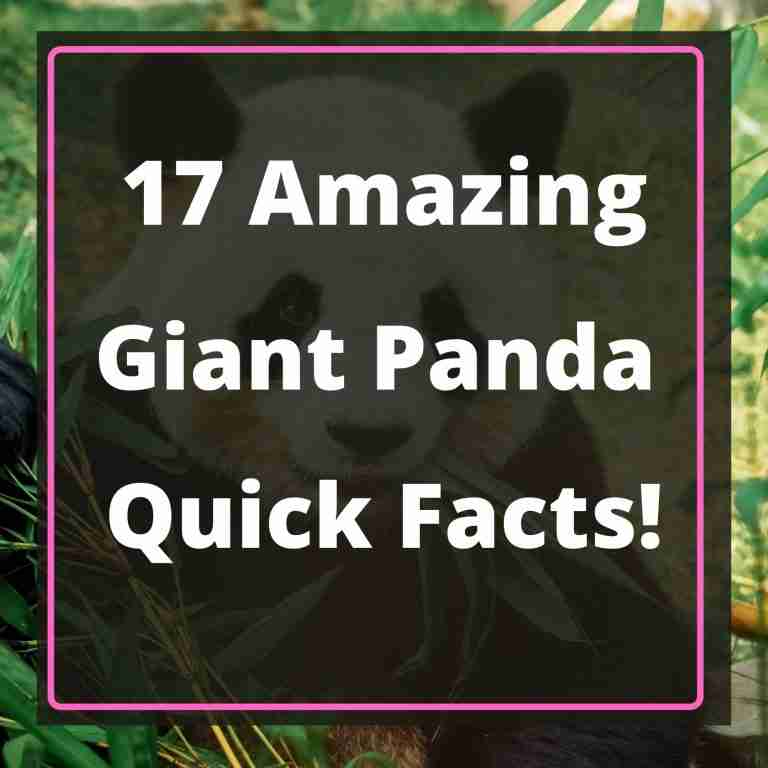 Although giant pandas look like boring animals, there are lots of interesting facts about them. As a panda lover, how well do you know these large animals?

Without keeping you in suspense, here are 17 amazing giant panda quick fact!

I know this sounds unbelievable, but it is the truth. At birth, baby pandas usually have pink furs that can be confusing to people who haven’t seen them before. After three to four weeks, the black and white furs begin to show on their body.

Some species of giant pandas have brown furs. But as of now, only one of them is being raised in a breeding center in China.

2. A Group Of Panda is Called an Embarrassment

Sure, giant pandas can be clumsy when they climb trees or roll in the snow. But they are not embarrassing, instead, they create fun while playing in the zoo or the wild. No one knows how they got their name, but whoever gave these cute creatures this funny name saw something we didn’t.

Other names for a group of pandas are “a cupboard of pandas” and “a bamboo of pandas”.

3. Sleeping and Eating is the Giant Pandas’ Hobby

Funnily, giant pandas have a hobby of eating bamboo all day and sleeping. They spend 10 to 16 hours feeding on bamboo, a diet that contains little nutrients. Regardless, the giant pandas eat 14 to 38kg of bamboo every day to gain enough energy for small tasks.

Also, giant pandas love sleeping, even on trees, as long as the place is comfortable. They sleep every 2 to 3 hours within eating hours, during the day, and also at night. Since their main diet of bamboo contains little nutrients, they don’t perform a lot of activities.

You’ll agree with me that the giant pandas’ lifestyle is a lazy one.

While observing giant pandas when they eat bamboo and other plants, you’ll conclude that they are herbivores. But did you know that they have the same digestive system as carnivores? Yes, giant pandas gain most of their calories from protein, the same as other carnivorous animals.

For real, giant pandas are built as flesh-eaters such as wolves, lions, tigers, and others.

Scientists think the reason these pandas prefer bamboo to other diets is due to the plant’s abundance. Moreover, they don’t have to compete with other animals over it.

Thanks to nature, giant pandas have an ‘abnormal’ extra thumb compared to other creatures. Most animals have five fingers and toes each that makes climbing, walking, and performing other activities easy. Luckily for giant pandas, they have strange wrist bones that allow them to hold and handle bamboo with ease.

With these extra thumbs, the giant pandas are good to go when it comes to eating and climbing trees.

Looks can be deceiving! Don’t be surprised that the adult giant pandas you see on TV or in the zoo were once blind. Immediately after birth, the cubs are always helpless because not only are they weak, but they are also blind.

Several days after giving birth to her young, the mother panda stays in the den to take care of them. After 1 year and 6 months, the pandas are old enough to look for food by themselves.

Another interesting piece of information about giant pandas is their size. Newborn pandas are always very tiny (around 4 ounces or 100g) and completely dependent on their mother for close to two months. It is so hard to believe that those tiny, helpless cubs grow to become large creatures.

8. Pandas are Great Climbers and Swimmers

Besides eating and sleeping all day, giant pandas are very good at two things. From 7 months and above, they can climb tall trees and mountains easily thereby creating an interesting sight to viewers. In addition to this, giant pandas can swim perfectly, just like other bears.

I told you earlier that these panda bears are interesting creatures.

9. All Giant Pandas In the World Today Come from China

No arguments or doubts, all the pandas you watch on YouTube or see in various zoos have their origin from China. To save the lives of these bears, most breeding centers in China have provided special habitats for them. It is difficult to buy a giant panda, but you can go to China with a lot of money to rent one.

Have you ever heard the word “loner”? Giant pandas are living examples of one. Most times, they avoid one another in their habitat – a strange behavior among animals. With their excellent sense of smell, giant pandas hide once they sense the presence of another panda.

11. Despite Their Large Size, Giant Pandas Have Predators

Guess what? Giant pandas have enemies too, despite their big stature and cute faces. Most times, the adult giant pandas find ways to escape predators, but not their young.  Snow leopards, jackals, eagles, and feral dogs prey on the young pandas.

Among the few predators that attack the adult giant pandas, man is the greatest. Sadly, that’s why the giant pandas’ population is constantly decreasing every year.

12. Giant Pandas Do Not Hibernate During Winter

Compared to the other bear family, giant pandas are usually active during the winter period. Instead of reducing their exposure to the winter elements, the giant pandas find a place to eat bamboo and sleep till the phase is over. They don’t run into hiding or hibernate when the weather becomes unbearable.

Honestly, this is remarkable behavior!

13. Giant Pandas are Sexually Matured at 4 to 6 Years Old

Unfortunately, giant pandas are poor breeders, which means their reproductive life is low. Naturally, animals love mating, but the case of giant pandas is different. Female pandas can get pregnant once a year, and it is only during this period that they attract males.

Once this season is over, within 2 to 4 days, the male and female pandas go their separate ways. Isn’t it strange?

15. Mother Panda Takes Care of One Cub at a Time – Even If She Gives Birth to Two

Survival of the fittest applies to the panda cubs immediately at birth. Whenever a mother panda gives birth to two cubs, she cares for one and ignores the other. In captivity, the zookeepers ensure the cubs are well taken care of, but that’s not the case in the wild.

If nothing surprises you about these panda bears, this particular uncommon behavior should.

This is another interesting fact about giant pandas. Disgusting isn’t it?

We all know that pigs enjoy rubbing their body in the dirt, but giant pandas?  But why do they behave this way?

Studies have shown that pandas roll in horse poo just to feel warm in the winter season. BCP and BCPO are two chemicals in the horse poo that block cold receptors in the pandas’ skin.

So, before you call these bears “dirty”, understand that there’s a reason behind their behaviors.

While watching giant pandas on YouTube or TV, you’ll observe that they are large creatures. It’s not a Photoshop or Film trick, giant pandas are large animals in reality. Male pandas weigh 113 kilograms in the forest, while the females weigh close to 104 kilograms.

One surprising thing about these large animals is that they are usually very small at birth. I believe the giant pandas’ size is a mystery to many people, including me.