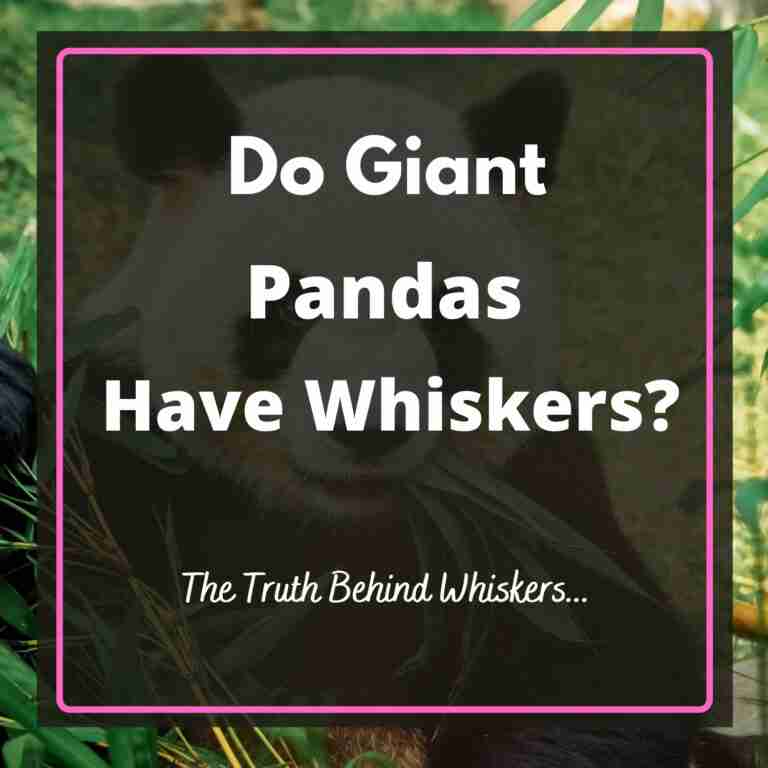 Wait, what? Do giant pandas have whiskers? Now that’s a question. We are going to look into the matter if they have whiskers or not. Giant pandas are one of the most adorable creatures we could ever come across. We see really cute cats, pups, and many other animals. However, giant pandas have an entirely different fan base. And this is because of their loving and friendly nature.

If it were me, I would have done really extensive research on giant pandas or probably would have opted for it as a major during my degree. Well, that’s exactly how much I love and adore these beautiful cute little creatures.

Let’s get to the real question again.

Do panda bears have whiskers?

No, panda bears or giant pandas do not have whiskers. However, they have hair on their snouts but not the type of hair we could call “whiskers.” Now you must be wondering what is the difference between whiskers and having hair on snouts right?

Well, there surely is a difference. You can simply call giant pandas snout hair as their whiskers. If we look into the definition of whiskers, whiskers are special hair for a purpose. You can say they are present there for a reason.

Essentially, whiskers are tuned sensory body parts that help in navigation. They sense the environments and make animals move around freely and easily. Functionally, whiskers are similar to the antenna on insects. Hence, the hair with the sensory properties are what we call whiskers – but without the sensory equipment, they are only hair!

We usually see animals like cats and dogs possessing whiskers. On the other hand, giant pandas have hair-snouts that appear like whiskers. Despite a lot of similarities, such as having belly buttons, this is a major difference between giant pandas and other mammals.

Why giant pandas do not need whiskers?

However, the absence of whiskers for giant pandas is totally justified. Like, why do they even need whiskers when they can look around for themselves?

Whiskers mostly have animals such as cats while they are prowling through thick and tall grasses. This prevents them from getting something sharp by surprise that could poke them anytime. However, giant pandas are kind of “huge,” and there is very little chance that they could get harmed by such a position.

Do red pandas have whiskers?

It’s a big yes! Red Pandas do have whiskers. When we are talking about giant pandas and do giant pandas have whiskers, how could we not talk about their immediate relative? Yeah, you are guessing it just right – it’s the red pandas! Did you see it from this side? If not, no problem. We are here to cover everything for you.

Red pandas do have whiskers for the same purposes as they are present on snouts of other animals. If you ever had a look at red pandas, you would have noticed that they essentially resemble other animals like cats or foxes – more than they resemble the giant pandas. Hence, they are more into prowling and climbing grasses and trees. Therefore, they need whiskers to sense any harm or danger coming their way.

In addition to this, if you think there are only 3 to 4 whiskers on each side. You are mistaken! You will see tufts of whiskers on both the right and left sides of their snouts. You can say there is some heavy sensory and navigation system present in the red pandas. This is one of the very significant differences that giant pandas and red pandas have.

What other animals have whiskers?

Apart from the red pandas, many other animals possess whiskers. The main ones that we notice usually include the following:

Before this article, a lot of us would have considered whiskers as simple long hairs. However, they are quite special and mostly thicker and rigid than usual body hairs or furs. Surprisingly, mammals possess them not only around their mouth or snouts but above eyes and sometimes between the digits of the paws.

It totally depends on the habitat and lifestyle of a particular animal. Mostly whiskers are helpful with animals that can have super fast and swift movements. They allow them to quickly retreat before something actually hits them.

What do giant pandas use for sensing?

Now, this does seem like a legit question! If they don’t have whiskers, what do they have to navigate around? It is a very surprising fact that Giant pandas do not have very good eyesight to look and sense danger. They have something else that helps them stay safe even among really ferocious animals.

Whiskers are technically for animals that have swift movements. For example, giant pandas are so indolent that by the time they sense something as close as to touch their whiskers, they can’t run away – or save themselves. Hence, they need senses that help them see danger from a good distance so that they may make slow – but safe movements!

Wondering what it actually is?

Well, to break it to you, giant pandas have a very enhanced smelling sense – something we usually call “olfaction”. Hence, when it comes to moving around and navigating, they usually sense it with their smelling capabilities. Moreover, they are able to detect the presence of fellow giant pandas with the help of their smelling abilities.

During the mating seasons, the giant pandas also rely on their olfactory senses to locate fellow female panda bears to breed. Hence, if they do not have whiskers, they definitely have something much better that helps them survive.

For a lot of people, it’s actually a relief that giant pandas do not have whiskers. Because there are some people out there who do not quite like the idea of animals having whiskers, since they are often unable to clean themselves, whiskers might put their caretakers in a lot of trouble. They look super cute without the whiskers – and there is no point wishing that giant pandas had them.

I’m glad that we finally learned that giant pandas do not have whiskers in the sense we usually think of them. But they do have facial hair – or more appropriately, the fur. The fur is more soft and fluffy to feel. So, I am happy with that.

Moreover, since pandas have other sensory mechanisms such as olfaction, they don’t really need whiskers. Nature has definitely made the right plan for them. You can’t really say that a thing touches giant panda’s whiskers, and they make swift movements to run for life! They would never do that – trust me. So they should better have some preventive measures.

For more interesting stuff about giant pandas, such as what they eat, where they live, and how they spend their time, you can check our blog section.

If you are a true panda lover, you are going to find almost everything that had kept you awake at night wondering about these cute animals. So, best of luck, and welcome to the panda league!