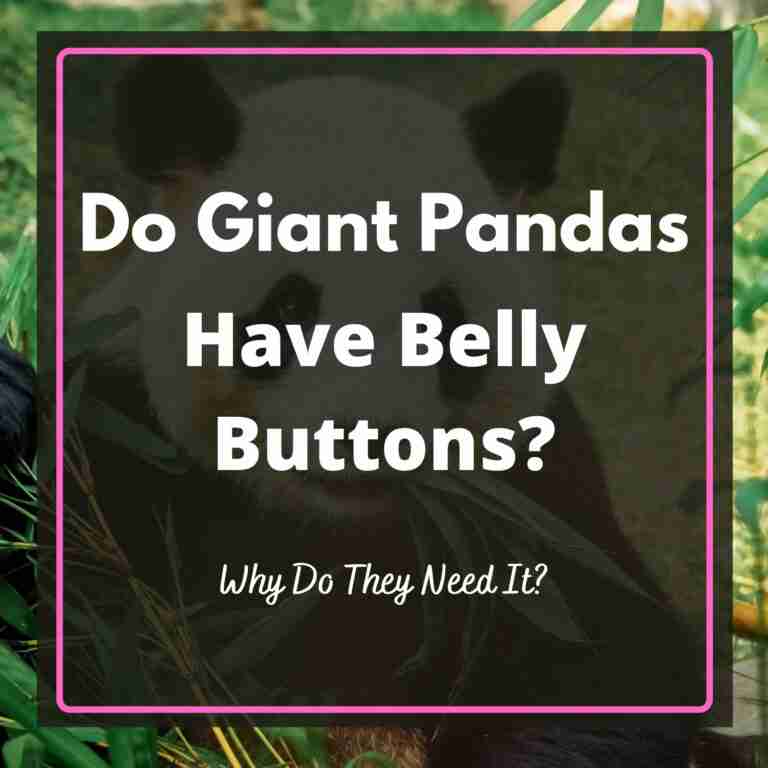 Whenever I see or think of a panda, I only see its fat belly covered with fur. Have you ever wondered if they’re like us? Do panda bears have belly buttons?

At least for me – whenever I think of them, I forget everything else. Everything that I have read about them, like what do giant pandas eat, where they live, how they eat, and literally everything about them makes me so happy.

In this article, we are going to find out if they have belly buttons, and if yes – why don’t we notice them quite often. So, let’s get started!

Do giant pandas have belly buttons?

Yes, giant pandas do have belly buttons. Wondering, why?

We have the answer for you: Since giant pandas are mammals, like all mammals, they have belly buttons because of the presence of an umbilical cord that was present at the time of their birth. Soon after they are born, the mother panda bites it off and keeps its cub close to her body.

But the question is, why do the mothers keep them so close to their bodies? The purpose of keeping the newborn cubs close to their mother’s body is to provide them warmth. The panda cubs are very tiny when they are born. Hence, their mothers tend to be very protective of them.

Now, after a lot of contemplation about do giant pandas have belly buttons, let’s come to how they look on the panda bodies. Sounds fun, no?

As we all know that the Giant pandas are very furry and fluffy animals with white and black hair all over their bodies. This is the reason why they appear as fluff balls, and none of their features are quite visible.

If we look at them from a distance, all we would see are some fluffy, cute, and round-bodied bamboo eating pandas. They do have belly buttons, but because of the fur – you might not have noticed them.

Does a newborn panda have an umbilical cord?

Yes, giant panda cubs do have umbilical cords when they are born. The reason is that all mammals are attached to their mothers’ bodies through a connection that is known as an umbilical cord.

Since giant pandas are mammals, they follow the same general principle of development. Therefore, they possess an umbilical cord that later remains as a belly button.

What do mother pandas do with their baby’s umbilical cord?

Now when we know the answer of “do giant pandas have belly buttons?” there would be a lot of contemplation around why do they even have them in the first place. The belly buttons are essentially indicative of their umbilical cords.

Before the panda cubs are born, they have umbilical cords to supplying nutrients from the mother’s body. However, after their birth, the giant panda mother bite off their cubs’ umbilical cord. It later remains as a scar that we call the belly button.

Giant Pandas that are kept in captivity do not essentially have their umbilical cords bit off. However, the veterinarians disinfect the newborn panda cubs’ umbilical cord. Hence, it falls off on his own after a good 5 to 7 days! How smooth and cute.

People quite love the idea of keeping Giant Pandas with them at their homes – and it a fair desire. They are some of the most low maintenance animals, who eat whatever you eat – and behave as the most adorable thing on our planet.

What other animals have umbilical cords?

Many other animals, particularly mammals, have umbilical cords for the proper nourishment of their babies. These include:

Essentially, all animals that undergo development within their mother’s wombs are connected with umbilical cords. The cords provide them food and essential nutrients from the mother’s bloodstream to their cubs.

To sum it up, giant pandas do have belly buttons even though they are not visible. After all, they are considered mammals and share the same body type with other animals. For more interesting facts about giant pandas’ lives and how they live them, read more from our blogs section!