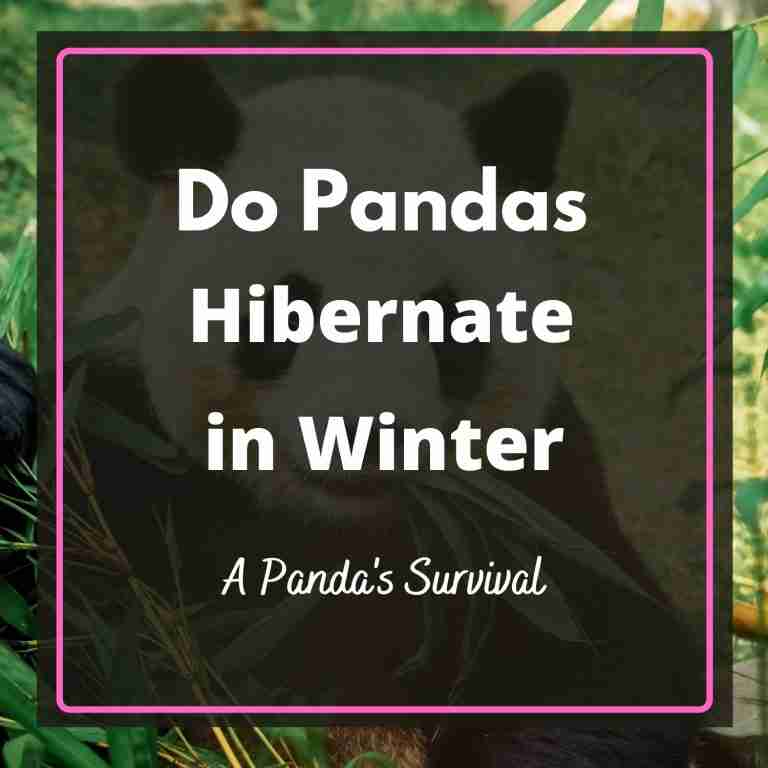 Do pandas hibernate or migrate in winter? This is a question that has been asked by many people over the course of the years. It is because giant pandas are considered part of the bear family but they seem to live differently.

What is the big deal with their diet and how does it affect the hibernation of the pandas? Well, let’s all find out in this article. So, I suggest that you keep reading until the end because there’s so much to learn about our cuddly bears.

Pandas do not hibernate because they have to keep eating bamboo every day. They can’t build the fat reserves necessary for survival during the winter because bamboo has a low nutritional value. This is how their diet affects their hibernation.

In the winter, bears and several other animal species go through this long-term sleep phase to survive the cold temperatures, but not the pandas. After all, winter can’t be easy when there is little food and extremely uncomfortable temperatures.

Pandas do not participate in any form of hibernation process. It’s not that they don’t like to sleep; they just can’t simply do what others do during winter. Besides, even if it’s not winter, giant pandas sleep around 8 to 12 hours per day.

No matter what season it is, giant pandas will always go by their daily routines.

Since they have relatively little fat, they are less able to protect themselves against cold temperatures. Well, the good thing is that they have thick fur to resist too much cold. They prefer to continue eating bamboo then let themselves die in winter.

How Do Pandas Survive Winter?

Giant pandas survive winter using their thick black and white fur. Another thing that makes them survive is their seasonal migration. When the weather gets cold during winter, they move to lower elevations to find places with warmer temperatures.

One study published in 2016 by Liu et. al. looked at factors that lead giant pandas to live in habitats with a temperature of about 64-69 degrees Fahrenheit. Similar studies are vital as China identifies habitat areas for protection and future reintroduction programs.

Even when they are awake and active during winter, they still try to conserve as much energy as possible. They especially avoid moving around when it’s cold and they stay in caves or burrows to keep warm.

How Do Pandas Migrate During Winter?

Panda bears simply move down to the lower parts of the mountains during winter where there is a warmer temperature than the higher parts. They are actually looking for bamboo at the same time. Well, they have to feed on bamboo regularly to survive.

Migration among pandas is not the same as what you are expecting. They will not cross countries or continents. but rather they will move to the patches of bamboo on the lower part of the mountain where they live in solitude.

Besides, they are endemic to Central China, so they will not move far away from it.

Most giant pandas live in Sichuan or most commonly known as the home of the giant pandas. In this place, there are 216 different bamboo species. However,  giant pandas only prefer to eat 32 of them.

Furthermore, only two of these 32 species are their favorites: the cold arrow bamboo and the unbudged arrow bamboo. Panda bears eat other kinds of bamboo if the two are not available for them.

Although bamboo grows widely in many countries, the bamboo species they like to eat are concentrated in Sichuan and surrounding areas. There is no wonder why pandas only naturally exist in China.

Moreover, the western regions do not have enough rainfall, which is not suitable for the growth of bamboo. This is the main reason why they migrate but not too far.

During the winter, red pandas do not hibernate. Their thick fur and bushy tails protect them from harsh weather, such as the cold, wind, and snow. Therefore, none of the pandas (red or giant) do hibernate at all.

They live in southern China, Myanmar, Nepal, and India in high mountains within bamboo forests, but unfortunately (like so many other animal species), they are endangered.

The red panda has so many names to be defined, including the cat bear, the bearcat, the lesser panda, the fox bear, the Himalayan raccoon, and the firefox.

Both pandas have modified wrist bones that contain a thumb that helps them grip bamboo during a feeding. The giant pandas, however, do not care about what part of bamboo they eat, whereas the red pandas eat only the leaves and shoots.

Well, the size difference explains it all.

Are Pandas The Only Bears That Don’t Hibernate?

No, pandas are not the only ones. Sounds intriguing? Let’s reveal them all.

The bears in Southeast Asia namely: sun bears and sloth bears do not undergo hibernation periods. The same is true with the spectacled bears of South America.

They all live in climates where food is not in short supply during the winter, therefore, they don’t have to hibernate at all. Sloth bears sometimes hide out in dens during monsoons. Well, if you have the same amount of hair, you would definitely do the same.

Even the male polar bears do not hibernate. Well, the cold season is no surprise for polar bears; they live with it all their lives. Take it literally from their names.

Lastly, adult male black bears are also known for not hibernating in the cold season. Their winter is spent munching on acorns, beechnuts, and more of the same kind.

Here are commonly asked questions across the internet related to the topic. Let’s answer them one by one.

What Do Pandas Do Instead Of Hibernating?

Instead of hibernating, they migrate to lower altitudes and continue their regular life, eating a huge amount of bamboo and sleeping for many hours. Well, it’s good to remember that most bears sleep in the hibernation period except for pandas.

How Far Do Pandas Migrate?

Every day giant pandas travel around 2.45 miles (4 km) to 6.21 miles (10 km) per day just to look for their favorite food (bamboo). They also spend their time looking for clean water to drink or sometimes swim, and tree shelter to spend their time sleeping.

Where Do Pandas Migrate To?

What Do Panda Bears Do In Winter?

Since pandas don’t hibernate in the winter, you will see them migrating down the mountains to avoid the extremely cold temperature. They will more likely stop in an area where there are thick bamboo patches. Just as we all expected, they will go here to eat.

Moreover, they have to eat every day even if the snow is falling. Oftentimes you will see them playing or rolling on snow, which is quite usual for the pandas.

Do All Pandas Hibernate?

No, giant pandas do not hibernate at all. Besides, there is no need because they sleep up to 12 hours daily. It’s like they do daily hibernation.

How Long Do Pandas Hibernate?

Let’s keep in mind that pandas do not hibernate. So, there is no answer to this question. On the other hand, we can say that after the winter season, they will move back to high altitudes to live a lonely life, considering they are solitary animals.

In this article, you learned that giant pandas do not hibernate in winter, unlike other bears. However, you also learned that they migrate during the cold season. Pandas cannot stop eating bamboo to survive, so no weather can stop them from eating.

During the winter months, many pandas might seem to be sleeping, but in fact, they are only conserving energy. Their bodies do not receive enough nutrients from the grass and bamboo all year long. Therefore, they have to eat more food to stay healthy.

Every animal has their own way of surviving the winter season. We should not abuse them during this vulnerable time. Always remember that each one of them struggles for survival, just like we do.

Here are some articles that you might find interesting, too.

2. Have you seen the whiskers of the pandas? Wait, do they even have whiskers?

3. What a cute sight! A panda egg! Do pandas lay eggs? It’s for you to find out!

What do you think of this article? Did you find it informative? Don’t forget to share it with your friends.