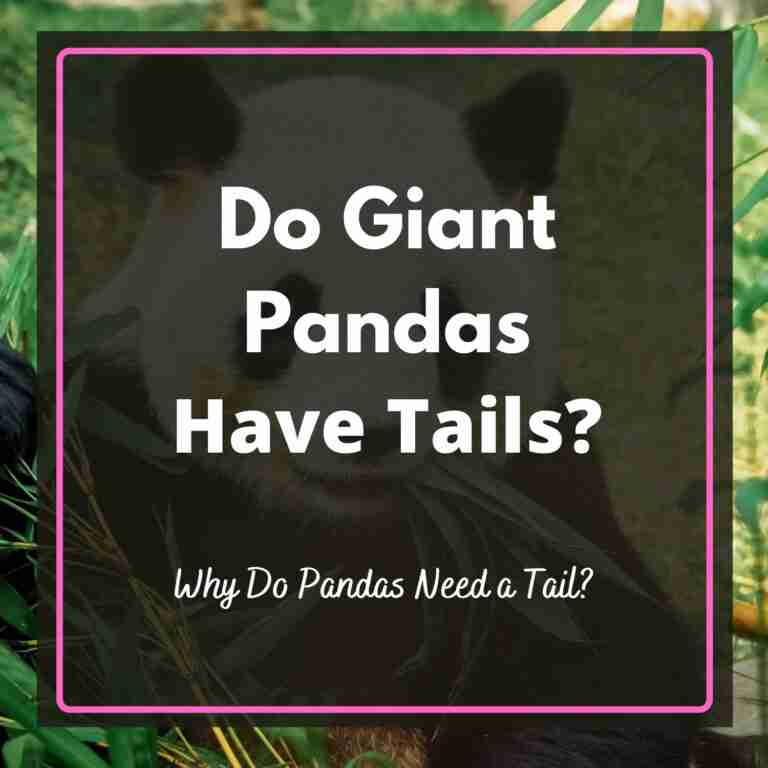 What do kangaroos, raccoons, and rats have in common? They all have tails – long ones. Have you ever asked yourself, “how about pandas?” – Do giant pandas have tails?

After a bit of research (that turned into A LOT, actually), I found out that they do have tails. We might not notice them very often because they keep them tucked close to their bodies, unlike other animals such as cats and dogs.

One of the reasons why the giant panda’s tail goes unnoticed is the reason they do not show off their body characteristics to express feelings. One might say – they are a bit introverted and not very expressive. That is why they have round and blank – yet very cute faces.

Similarly, like other body parts, their tails are rather stubs and are not generally used to indicate or show communication. Instead, they do so via their scent.

Do giant pandas really have tails?

So coming to the main problem, do giant pandas have tails? Yes, they do! In a way, we can say that it is a means for them to communicate – but it does not take part in communication actively.

The giant panda tail is very small in size and is barely an outgrowth on the giant panda body. However, we can’t say that it’s futile.

Well, if you ask me, the tails look pretty cute on them. They actually look like a bushy ball at their backs that look cool when they walk. Being the solitary bears, they do not quite use it to flex – but keep them close to themselves. So characteristic of a cuddle bear!

That’s one reason why we are often unsure of their presence in the first place. But, once you notice it, there is no going back. If you love pandas, you will just not stop noticing their tails too. At least, ever since I found out, I can’t.

How long is a giant panda’s tail?

We might ask, why don’t we notice their tails quite often? Well, the reason is their small size. For such huge panda bears, a tail of 4 to 6 inches (10 to 15) cm is actually a surprise.

If we look at them closely, we will find out that they are almost 59 inches (150 cm) from their nose to the back and weigh around 331 lbs (150 kgs). Over such a large surface area, a mere 4 to 6 inches long tail is most likely to be overlooked in a casual look at them.

Since the tail’s primary purpose is to protect the circumanal glands, their small size is perfect to keep it close to it. Moreover, a larger tail may not tuck with the giant panda’s body, and that’s what nature avoids in this case.

Do giant pandas have black tails?

Despite the black and white giant panda fur – the tail is actually white! It does not have any blotches or patches. It’s just fluffy and white. Everything about the giant pandas is so admirable and cute that I can’t stop myself from being awe-struck somewhere during my latest research on it.

The reason why they have white tails is probably for their noticeability. On a black and white body, a similarly patterned tail would have just camouflaged. But, a white one is quite noticeable. Moreover, black is not that we usually admire, especially in the case of cute animals like giant pandas.

So, now whenever you come across questions like do giant pandas have tails – you know that the adorable fluff balls have pure white and lovely tails.

Why do giant pandas need a tail?

When you begin wondering, the cycle goes something like, do giant pandas have tails? Even if they have, why do they have it even? Although the giant panda tail is not quite expressive, it doesn’t mean that they don’t need them.

Underneath their tails, there is their circumanal gland that is actually responsible for urine production as well as for the excretion of certain substances. These substances are of particular importance as they are a means for them to communicate.

The giant pandas do not express their emotions and presence by making noise. Instead, they leave off their scent through excrete produced in their circumanal gland. In this way, they make their counterparts aware of their presence somewhere around. The scent also helps them in the mating process.

Moreover, the giant pandas also belong to a class of animals that mark their territory by leaving off their scent around in their particular areas. This helps their cubs and families to stay in the safe zones.

Why do panda cubs have long tails?

It might sound surprising, but it’s actually the tail that does not grow in size as the panda gains weight. The very small panda cubs have the same tail of size 4 to 6 inches (10 to 15 cm), and when it grows to 331 lb (150 kgs), the tail size remains the same.

The only difference between an adult giant panda tail and a panda cub’s tail is the presence of hair. The panda cubs do not have hair on their bodies – including the tail. They are very small and tiny and hairless. Therefore, it looks like they have longer tails.

If you see a panda baby, I’m pretty sure you will fail to accept that it’s actually going to grow into a large giant panda. The grown-up pandas and baby pandas are just two different entities – frankly speaking.

Do red pandas have tails?

Red pandas tend to have longer and fluffier tails, which have alternating white and red bands. They are somewhat similar to giant pandas and raccoons. However, a major portion of their diet – up to 97% depends on bamboo. Therefore, we consider them more closely to the giant pandas.

Provided that red pandas are immediate neighbors of giant pandas, when we think of questions like do giant pandas have tails, it’s obvious that we might think about red panda’s tails too. Surprisingly, they don’t quite resemble in their body structure.

Not only the tail but the whole body of a red panda is also different from that of a giant panda. You can instantly recognize red pandas by their cute faces and reddish copper-colored bodies. They have long bushy tails and some features that will resemble a raccoon.

And, surprise! They can climb trees too.

Panda tails are small, but they are very important as a means for releasing the substance responsible for their identification. Moreover, their white tails are quite prominent against their black and white body.

It’s quite a sight to see a giant panda moving around – as if they don’t care about anything in the world with their small fluffy tails. Their black and white patched and blotted bodies help them maintain a somewhat reclusive and solitary environment (one reason why introverts like me love them cute giant cuddle bears).

The panda tails are another fascinating thing about them. I’m looking forward to finding a lot more exciting things about them. Because whatever new stuff comes in, we get more enthusiastic to love and adore them. In addition to giant pandas, the red pandas are very cute and endearing too!

I hope you learned something from this article. If you did, don’t forget to share it!