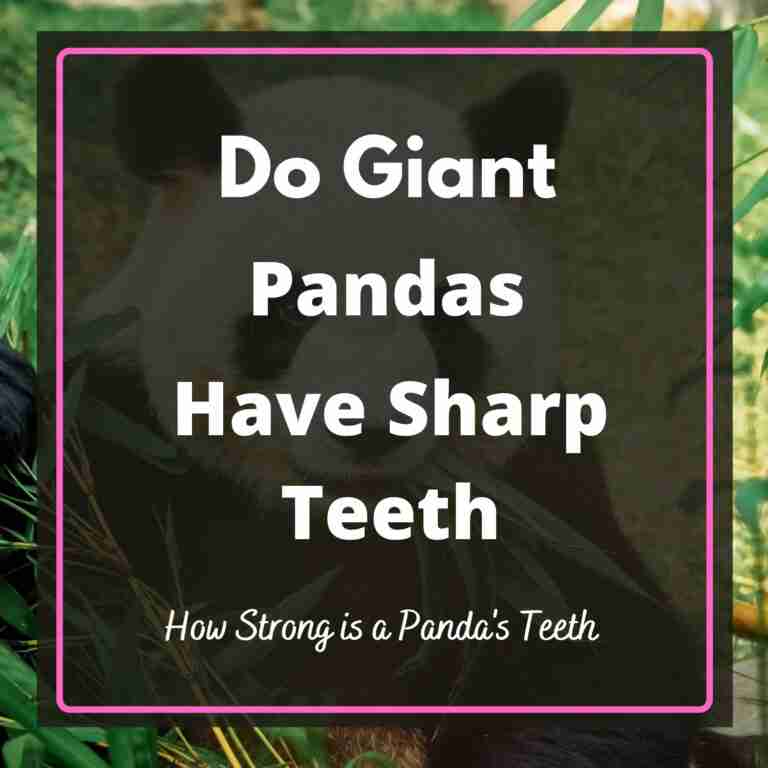 Pandas look so adorable, cute, and fluffy. Whenever we think of them, we picture them eating bamboo or cuddling around with each other. But is this all they do? I was wondering that do giant pandas have sharp teeth like carnivorous animals?

In this article, we are definitely going to have an insight about giant pandas having sharp teeth.

So, let’s look into the matter that do giant pandas have sharp teeth, and if they have them, what do they do with them.

Do panda bears have sharp teeth?

Giant pandas actually have very sharp teeth, including incisors and canines. If we look into their mouth, we will find out that an adult giant panda has 42 teeth.

Surprising, isn’t it? Even humans have only 32 teeth, and they have 42 – just to eat bamboo!

The upper jaw alone consists of six incisors, two canines, eight premolars, and five molars. The lower jaw follows the same dental formula, and both of them together contribute to the total number of 42 teeth.

Most of us might have the idea that canines are very strong and sharp teeth that are mostly present in carnivorous animals. The main purpose of canines is to crack the bones and tear the flesh away.

The teeth of giant pandas still show that they were originally carnivorous – but later changed into herbivorous animals. Now, with these pairs of canines, they can easily bite the hard bamboo stalks. The jaws of giant pandas are also very strong to facilitate them in chewing bamboo.

These canines are one reason why people consider giant pandas as ferocious and wild animals. Little do they know that even after nature made them carnivorous, just to avoid the fight, they adapted themselves as herbivorous. Such is the nature of giant panda bears!

Now when we know the answer to the question that “do giant pandas have sharp teeth?” we must talk about what do they actually look like.

Having a closer look at the giant pandas’ jaw will reveal a lot upon us. It’s quite surprising that their jaws do not quite complement their innocence. They do look quite dangerous with this set of teeth.

The incisors are relatively very small. After the six incisors in the middle, there is a little space between incisors and canines. Four canines are present – two in the upper jaw and the other two in the lower jaw.

They look very sharp and pointed. The canines are quite longer and stronger than the other teeth. They were actually meant for tearing flesh and breaking bones.

Just after the canines, there are premolar and then molars. Molars have quite a broad surface that aids in the proper chewing of food – particularly bamboo.

Since it’s difficult for the giant panda bodies to metabolically digest bamboo, they do so by chewing it properly between their teeth so that it does not cause any trouble.

On the whole, the giant panda teeth do look a bit too scary for such a cute and adorable animal. But, what can we possibly do? As long as they do not harm us, we are good!

Why do giant pandas have canine teeth?

Giant pandas’ canines were essentially meant to make them adapt to the carnivorous lifestyle. The strong canines were so sharp that they could easily crack bones of other animals and tear away the flesh as well.

However, ever since the giant pandas moved away from the carnivorous lifestyle, they utilize their two pairs of canines to break and bite the hard and stiff bamboo stalks.

How strong are giant pandas teeth?

According to a study, it is suggested that the giant panda teeth are so strong that they have the teeth bite force of 2603.47 newtons and a bite force quotient of 292. This is enough evidence to tell how it is possible for the giant pandas to break away and chew bamboo so easily.

Giant panda teeth are undoubtedly so strong to crack the bones of other animals. Probably that’s one reason why they easily prey on small animals such as rats, rodents, and squirrels. Even if they try to break bones, it won’t be a problem for them.

In some cases, these strong teeth might help giant pandas save themselves from predator attacks. Although it is very unlikely, they must use them. So, that’s another answer for do giant pandas have sharp teeth, and even it tells how sharp and strong they actually are!

Do red pandas have sharp teeth?

Although both of them are known as pandas, they are not each other’s close relatives. Red pandas come from the family Ailuridae, whereas giant pandas belong to the class Ursidae. However, since both of them eat bamboo – they are generally termed “pandas.”

It is quite important to notice that if both the red and giant pandas eat bamboo, do they have the same structure of teeth as well?

Although the red panda is smaller than the giant panda, and its jaw appears to be small, it possesses razor-sharp teeth. Just like the giant pandas, they were also carnivorous, feeding upon large animals that needed preying.

The red pandas teeth – like the giant pandas’ teeth – can easily tear flesh or break bones of other animals, but pandas use it for chewing bamboo. So, it’s kind of justified that why do giant pandas have sharp teeth and what do they use them for.

Today, we learned that giant pandas indeed have sharp teeth. The bite force of giant pandas is definitely somewhat closer to that of a lion. This is because both of them are essentially carnivorous animals.

The total number of teeth is well adapted to kill any animal that comes across its way.

The strength of giant pandas’ teeth is undoubtedly so high as to break bones, they still tend to feed on bamboo. Thus, they do not quite admire their carnivorous side more than their herbivorous side.

For this reason, we will find giant pandas eating fruits, vegetables, cakes, pastries, and other stuff – but not what they should eat – raw meat. Probably, the fact that they do not eat meat is responsible for their lesser wildness than other carnivorous animals.

For more interesting facts about giant pandas, where they live, what they eat, whether they have thumbs or whiskers, or whatever comes to mind, you can visit our blog and read on it.

We update our blog with the latest and new information about giant pandas and their lifestyle.