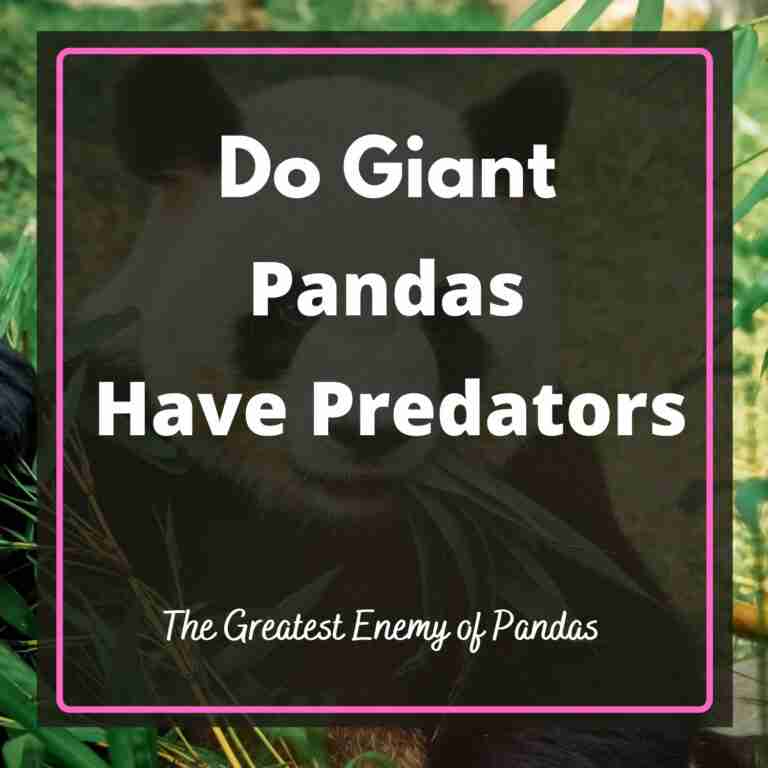 Normally, giant pandas are gentle and peaceful animals. It might make you wonder, “Do such adorable animals have predators?” After all, who would want to hurt a cute little panda right?

Due to their large size, fully grown giant pandas have very few predators. To name a few, we have jackals, snow leopards, jaguars, and wild dogs as their potential predators.

Have you ever wondered, if there are other predators besides these animals? And who is their greatest enemy?

In this article, we’ll carefully examine each of their predators and how do pandas defend themselves against them. Keep reading to find out!

Who are the Predators of Giant Pandas?

There are not many natural predators of giant pandas. However, they can be attacked by humans, jackals, leopards, wild dogs, yellow-throated martens, and jaguars for various reasons. It is usually the cubs of giant panda cubs that are in the most vulnerable situation.

Below is the list of major predators of giant pandas.

Wild dogs are known for attacking the cubs of giant pandas. They are even capable of killing adult giant pandas for food.

Snow leopards are animals with great strength and power. They usually attack panda cubs with the help of their sharp teeth and sharp claws. Mostly active, snow leopards feed on their preys for several days. They are a danger to pandas mostly because they reside in the same mountainous region of central China.

Jackals are scavengers that are well adapted for hunting because of their long legs and curved canine teeth. They usually hunt large prey such as antelope, gazelles and livestock, but are also known to hunt baby giant pandas.

Who is the Greatest Enemy of Pandas and Why?

Giant pandas have very few enemies due to their massive size. They cannot be easily attacked by other animals. However, human beings are the biggest enemies of pandas. Although hunting is banned, humans indulge in the illegal hunting of pandas for their own greed. The pelt (fur) of pandas and their meat is sold in the market for money by people.

How Do Giant Pandas Fight their Predators?

Although giant pandas are gentle animals, they can definitely fight back if attacked by their predators to protect themselves. Below are the significant ways in which giant pandas defend themselves.

Giant pandas are excellent climbers. They use their climbing skills to save themselves from their enemies. Do you know that giant pandas are also rapid runners? Although lazy, they run rapidly in case of any danger.

Swimming is another technique used by giant pandas to escape their predators. Despite weighing approximately 150 pounds, pandas can easily swim to save themselves from their foes.

Pandas are massive animals with incredible physical strength. They have powerful jaws and sharp teeth to give a deadly bite to their predators. Therefore, predators usually attack panda cubs as they are easy to catch.

Do Pandas have Prey?

Pandas’ diet mainly consists of bamboos and grass. However, they do occasionally eat meat. Therefore, giant pandas do have a few preys like insects, birds, rodents, and carrion.

Interestingly, it’s because of the shortage of prey that giant pandas lost their taste for meat. Therefore, despite being carnivorous, pandas feed primarily on plants.

Do Giant Pandas Eat Other Animals?

The ancestors of giant pandas were mainly meat-eaters. It is only some million years ago that pandas turned vegetarian. One of the main reasons for this shift is the growth of massive bamboo forests in central China.

Giant pandas are plant-eaters to a great extent. They love eating bamboos and can eat 20 to 40 pounds of bamboo every day. You will be amazed to know that bamboo stalks amount to 99% of their diet. However, the digestive systems of giant pandas are like that of carnivorous animals. Therefore, they find it challenging to digest bamboos.

It is occasionally that giant pandas feed on insects, birds, and rodents despite having sharp teeth and an excellent capacity to digest meat.

Has a panda ever killed a human?

Pandas are capable of attacking and killing humans. However, the chances of a panda killing a human are very low. They are likely to attack people only when they feel threatened by them. They can also attack humans out of frustration. For example, there are possibilities of a panda attacking you if you try to disturb them while they are sleeping.

There are also some instances of zoos where pandas grab people’s legs or their jackets through the bars. However, the chances of causing harm on purpose are rare.

Nevertheless, you should not tease pandas unnecessarily as they are wild animals. Make sure you don’t approach unsupervised pandas for your safety.

To sum up, giant pandas do not have many predators. There are many reasons why giant pandas have a few natural predators. The first and foremost reason is their large size, making it difficult for their predators to attack them. However, the cubs of giant pandas are vulnerable to attacks from lions, snow leopards, and wild dogs.

Nonetheless, human beings are a significant threat to giant pandas. In fact, humans are said to be the biggest enemies of giant pandas. Destructive human activities such as illegal hunting and deforestation are dangerous for giant pandas.

But giant pandas have their own mechanism of dealing with their enemies. There is no doubt that pandas love sleeping and leading a peaceful life, but they can fight back their enemies when in danger. They use their physical strength as well as their climbing and swimming skills to escape their predators. Don’t be fooled by their weight, as pandas are also great runners.

Although giant pandas mainly feed on bamboo, they can prey on insects, birds such as peacocks, and rodents occasionally. In other words, you can say that giant pandas have both predators and prey. With this, we hope that this article answers all your questions related to giant pandas and their predators. Don’t forget to share your feedback in the comments. Thank You!