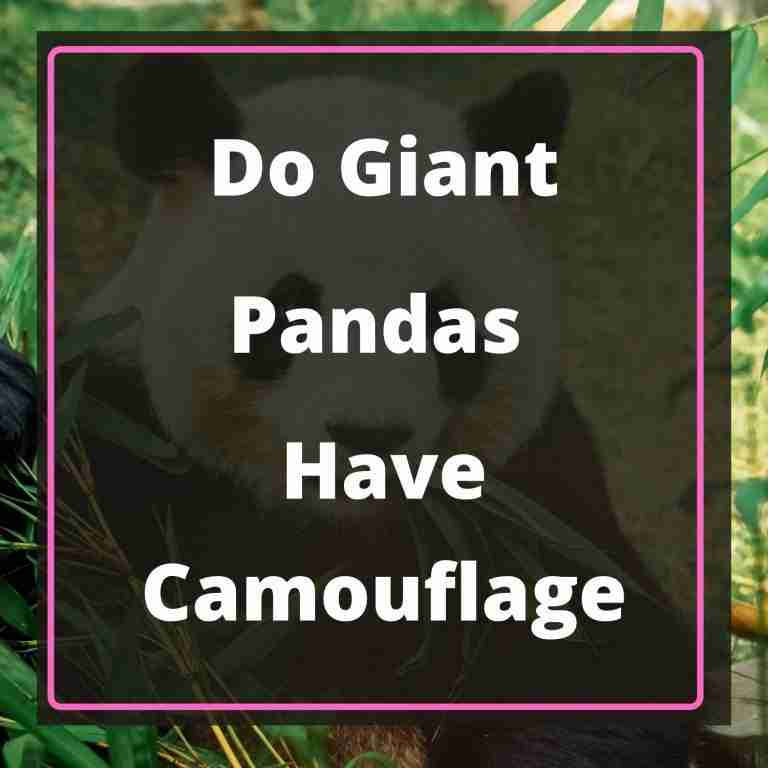 You might have watched videos of chameleons changing colors to camouflage.

And you may be wondering, do giant pandas camouflage too?

Why Do Giant Pandas Camouflage?

Pandas camouflage for different reasons. Let’s have a look at three major reasons for which a giant panda camouflages.

Another reason why pandas camouflage is to protect themselves from their predators. Their white fur helps them hide in the snow, whereas their black fur protects them from predators in shade or the shadows. This way pandas are not only able to escape their enemies but search for food freely.

Pandas also eat some small birds, rodents, and insects apart from bamboo. Therefore, they camouflage in order to keep themselves hidden from their prey and attack them at the right time. If pandas didn’t have the ability to camouflage, it would be easier for their prey to identify them and protect themselves from their attack.

How Do Giant Pandas Camouflage?

Let’s see how giant pandas camouflage. Imagine a giant panda going to a forest in search of bamboo.

On its way, the panda senses some danger and wants to protect itself. Now the panda has two options: to climb up a tree or to remain where it is.

If the panda decides to stay on the ground, it must be invisible to its enemy.

To make itself invisible, the panda will camouflage. To camouflage, it will use its black markings to hide in the mud.

The panda will remain hidden in the mud (without moving) until it is safe from danger.

Why Are Pandas Colored the Way They Are?

As per an article published on Forbes, it is revealed that giant pandas have a unique coloration for two reasons: camouflage and communication.

According to the source, the University of California, and the California State University, studied the pictures of several bears and other terrestrial carnivores to conclude that pandas use their black and white markings to camouflage.

The research also revealed that the black patches around their eyes and ears help them to threaten their enemies, besides acting as a means of communication to identify other pandas.

Why Do Pandas Have Stripes?

As discussed earlier, having black and white patches is an adaptive characteristic of pandas.

Pandas are able to survive in the wild because of their unique black and white patches.

These patches not only help them find food freely throughout the year but also protect themselves from any possible danger, catch prey, and identify other fellow pandas.

In this article, we have discussed that giant panda camouflage for a number of reasons.

It’s a way of survival that helps them hide or mix with their surroundings so their predators can’t find them.

Moreover, it also helps them to catch their prey without scaring them away.

To learn more facts about pandas, you can read 17 Amazing Giant Panda Quick Facts. Don’t forget to share this article if you found it helpful. Thank you!