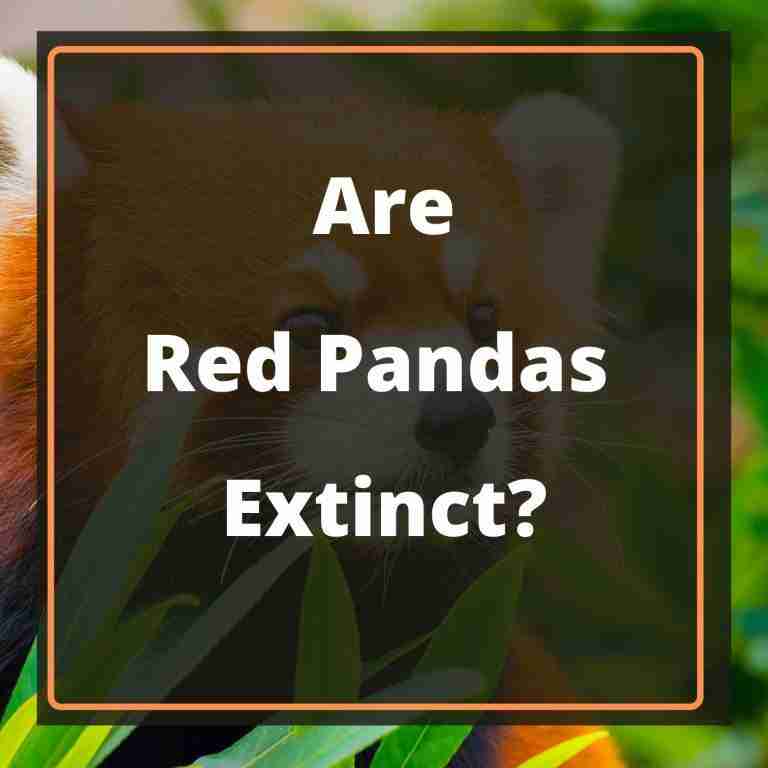 In the past years, we heard in the news about different animals becoming endangered species in the wild. This includes our cute and adorable red pandas; sad but it’s true. The question now is, are red pandas extinct?

The quick answer is NO. Red pandas are classified as endangered species in the present time and not extinct species at all. Unfortunately, being endangered is just one step away from being extinct.

Now that you know that red pandas are not extinct, you probably want to know how many of them are left in the world, right? Also, you might be wondering why on Earth did these animals become endangered?

Well, in this article I will answer these questions that you wonder about. Let’s get this started!

How Many Red Pandas Are Left In The World?

According to WWF (World Wildlife Fund), there are less than 10,000 red pandas left in the world as of today. This is quite alarming because their total population has been declining from 40% to 50% in the past years.

Some researchers believe that they have been experiencing this population decline over the last 20 years. Moreover, the Red Panda Network estimates that there might just be around 2,500 adult red pandas living in the wild at this present time.

Having said all of these, red pandas really need help and consideration to survive. They are the only living species of their kind. Therefore if they are extinct, their family will no longer exist and the only proofs that they have lived are their photos.

On the other hand, the government in some specific countries where red pandas naturally exist are doing their best to protect them. Also, there are some local and international organizations that aim to prevent red pandas from becoming extinct.

Why Are Red Pandas Endangered?

The red pandas in the wild became endangered due to some human illegal activities that include: deforestation, animal poaching, and global warming. Let’s take a look at each one of them to fully understand what’s really happening.

Humans keep on invading spaces in the wild. Deforestation includes cutting trees (turn into furniture and other wood production industries) and land clearing (turn into subdivisions or any infrastructure). Thus, these surely lead to loss of habitat.

It is good to remember that red pandas are tree dwellers (meaning they live mostly in trees). Moreover, it is in trees that they eat, reproduce, sleep, and more. So, if we take away these trees from them, where else would they live, right?

Adorable appearance and beautiful fur are the reasons why red pandas are always subjected to animal poaching. These illegal hunters sell them on pet trades in the black market. Here, red pandas can either be sold as pets or as animal fur.

Somehow, the cute looks of red pandas make some people want them as pets. Thus, animal poachers catch alive red pandas to sell to them. However, the difficulty of adjusting to a completely new environment will eventually kill them.

Another thing is their fur, red pandas have one of the most beautiful colored furs. It’s so unique that some people want to put it on their coat or any personalized things like bags, wallets, and more. Basically, getting their fur means killing them.

While this sounds saddening, this is true in the black markets that until now are running. Let’s just hope that things will go well for the red pandas in the wild.

Due to the modernization of human ways of living, the environment is at risk. We use chemicals that harm the ozone layer, which leads to the warming of the planet. Global warming can cause drought that can destroy forests where animals like red pandas live.

Although it is not directly killing the red pandas, this global condition can be a threat to all that lives in this world. Moreover, red pandas get their food in nature. So, if these will die, they will die as well; and the cycle continues until none will be left.

In this article, you learned that red pandas are not extinct. They are however considered endangered species, which is still bad news since they are just a step away from being extinct; especially in the wild.

Moreover, you also learned that most of the reasons why their population is declining are due to human invasion and illegal activities. Sadly, not all people care about the well-being of these animals. For them, they are just things they can compromise.

Let’s hope that the efforts of some group of people, who aim to help red pandas improve their conservation status, will succeed. So, in the future, the new generation will witness the beauty of these animals right before their eyes.

Did you find this article interesting? Share this with your friends and family and help in spreading awareness.