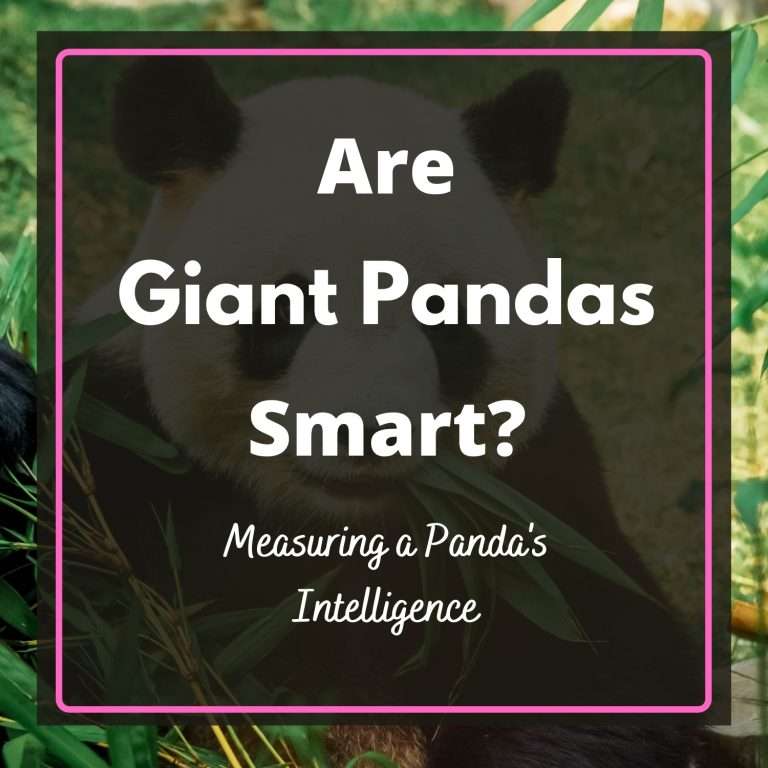 Most of us are familiar with giant pandas and their fun videos and super cute behaviors. After watching hundreds of videos displaying pandas as clumsy animals, you may be concerned about their IQ today. This makes me wonder, “Are giant pandas smart?”

Yes. Giant pandas are smart animals. Though they are clumsy, they are unexpectedly smart, graceful, and intelligent. Under certain conditions, these charming creatures can even turn out to be dangerous.

We say that giant pandas are smart. But can we prove their intelligence? To show you they are tricky and intelligent, we have some examples of situations that will change your views about giant pandas forever.

Let’s see how pandas show their curiosity and smartness.

Proof that Pandas are Smart

The first event of a prison break by pandas happened in 2016 when the pandas named Menglan and Qing Xiao escaped their enclosure in the Chengdu Research Base of Giant Panda Breeding. During this event, the pandas displayed their qualities for teamwork.

During this prison break, the panda named Qing Xiao sneaked near the enclosure wall along with his partner Menglan. As Qing Xiao crouched down near the wall’s base, Menglan was seen climbing his back and up the wall to escape from the enclosure finally.

The giant pandas proved that they are super intelligent by impressively avoiding traps laid for them.

In the Panda research center when the scientists tried to lure them into a cage with bone bait and examine their health. Naturally, as pandas love chewing bones, they got tempted and attempted the cage.

However, sensing a trap, the panda shoved his hand through the cage bars and pulled out the bone through these gaps.

It was definitely quite impressive but was not a successful attempt by the researchers. There had been several attempts to prevent the pandas from getting the bone by blocking the side walls. But the giant pandas managed to sense the trap and get their bones by reaching down the cage.

If you believe giant pandas to be dumb, then you haven’t heard about the story of Al Hin. In 2014, Al Hin, a female Giant Panda of the Chengdu Research Base of Giant Panda Breeding Centre, faked her pregnancy for more treat, attention, and care.

Being excited, the zookeepers and researchers fed Al Hin with tasty treats like extra fruits, bamboo, etc. as breeding giant pandas is difficult and rare. Researchers believed that Al Hin understood the benefit of being pregnant and faked her own for more care. She behaved normally after each feeding time and showed behaviors of a pregnant Panda when hungry.

It was a case of phantom pregnancy that showed the researchers how manipulative a Giant Panda can be!

4. You Can Train a Giant Panda

Some of us may consider training an amazing animal like a giant panda unethical, but some find it amusing. However, without getting into that argument, let’s focus on the interesting fact of how they respond to the training. The best example of a trained Panda was Ying Ying.

Ying Ying was a female show-panda who learned how to ride children’s bikes, toy cars, play basketball, and solve puzzles. Her trainer even taught her to go to the toilet when she felt the need to relieve herself in between acts. Ying Ying soon became a celebrity Panda and received appreciation and VIP treatment worldwide.

So far, we have seen cases where pandas under captivity displayed acts of smartness and intelligence. But this species has intelligent natural instincts even in the wild!

Today, you have learned that giant pandas are highly intelligent and smart creatures. These creatures proved their curiosity on several occasions.

Though they are smart, the laziness and clumsiness of pandas often overpower their intelligence. Probably that is the reason why their numbers have reduced in the wild over the years. But these adorable creatures never fail to amuse us.

If you like giant pandas and found our article interesting, share this article with other panda lovers!