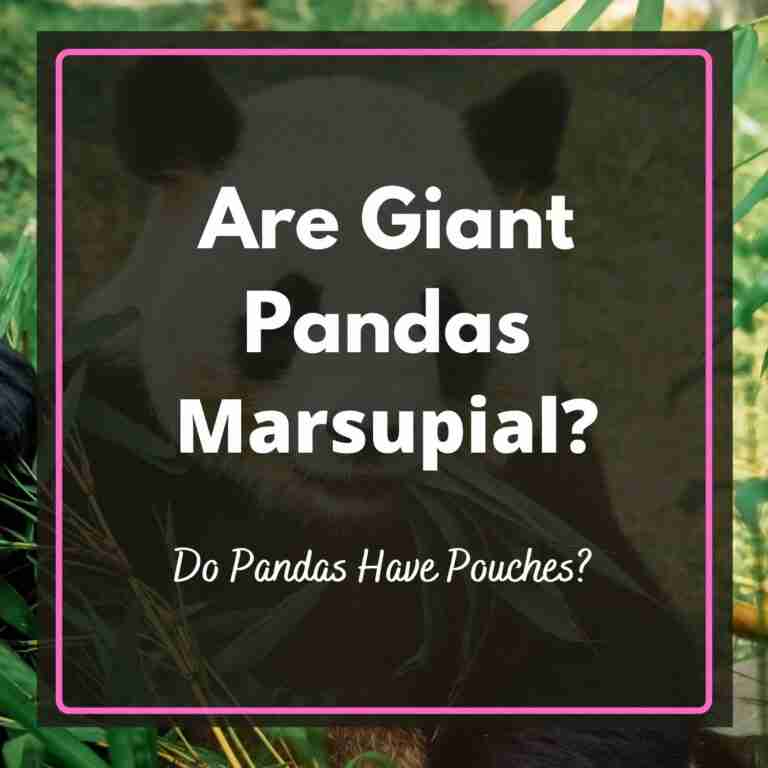 If you are a panda-lover, you may be wondering what kind of mammals are giant pandas. In fact, I often find myself asking this before – Are giant pandas marsupial?

Here’s a short answer, giant pandas are not marsupial, instead, they are called placental mammals.

The giant panda is classified as a mammal. All kinds of giant pandas belong to the mammalian group.

If you are still confused and want to know whether giant pandas are marsupial or not, this article will give you a deep insight into your question and will answer why they are called placental mammals.

What is a marsupial?

The word “marsupial” is derived from the Latin word “marsupium” which means pouch. It is also important to remember, not every marsupial has pouches. The basic function of this pouch is to protect the offspring and provide the necessary nutrients for their nourishment like milk.

These pouches are located on their mother’s belly. They give birth very early, therefore, when they are born, they are very tiny in size, hairless, and are partially formed.

Marsupials are not nourished completely as they have a short-lived placenta. However, to survive in the world they continue to live in their pouches and get the necessary nutrients there.

Newborn babies spend their early time in these pouches and get their essential nutrients there. After a few months when they fully developed and matured, they jumped out of it and lived independently.

Some of the marsupials do not have a pouch, but they have a fold in which the baby fits and lives in their early development of life. They have an extra pubic bone that supports the pouch.  There are more than 330 species of marsupial and are mostly found in Australia and South America.

The simple answer to this question is No, giant pandas are not marsupial, and rather they are placental mammals.

If you want to know why giant pandas are not marsupial, first you should know the difference between placental and marsupial animals.

When placental animals give birth to their babies, they are born fully formed and mature, hence they do not require any nourishment after birth.

On the other hand, when marsupial animals give birth to their babies they are immature and incomplete, so they require a lot of nourishment to survive in the world and they live in their mother’s pouches for weeks and months.

So if you look at the giant panda you would see, the female giant panda has no pouch, though the newborn cub is blind and hairless, it is fully formed.

No, just like giant pandas, red pandas do not have pouches, and hence they are not marsupial either. The gestation time of red pandas is about three months, the newborn cub’s eyes and ears are closed.

When they are born they live in a nest which is made up of twigs and grass. Three months after the birth, they emerge from the nest, but they stick with their mothers until the next breeding season begins.

What are the examples of marsupial mammals?

These are the examples of marsupial animals. When these animals give birth to their babies, they are partially developed and need a lot of nutrients to survive, so they fit in their mother’s pouches.

Some of the marsupial animal species do not have pouches, but they have a fold on the belly which helps in keeping the baby. The baby lives in that fold and pouch for weeks and months depending on the type of species. When they complete their tenure, they jump out of the pouch and survive their lives independently.

Wombats are short-legged animals with the pouch on their mother’s belly. The baby wombat spends nearly 5 months in the mother’s pouch, so after a few months, it begins to crawl. Wombat is mostly found in Australia.

Similarly, kangaroos belong to the family of macropods meaning “large foot”. The gestation period of kangaroos is very less that’s why it is classified as a marsupial, as baby kangaroos complete their nutrients in the mother’s pouch after birth. They spend 235 days in the pouch. These are called the largest and tallest marsupial animals.

What are placental animals?

Placental animals are fully nourished and matured when they are born. These types of mammals develop the placenta during pregnancy. They get nourished through the placenta in the mother’s womb. The basic structure of the placenta is spongy and it consists of membranes and blood vessels.

When the baby is formed in the womb, the placenta–an embryonic organ that is attached to the mother’s uterus and helps in delivering the oxygen and nutrients to the baby. Therefore, placental animals do not have pouches in their bellies, as their babies are fully matured and developed, so they do not require any extra nourishment. There are more than 4,000 species of placental mammals. The scientific name of placental animals is eutherians.

What are the examples of placental animals?

These are examples of placental animals.

When pandas give birth to their cubs, though they are relatively smaller than their mother, they are fully developed and nourished, therefore their mother does not have pouches on their bellies. To survive in life they do not require any extra nourishment.

They are fully nourished in their mother’s womb through the specialized embryonic organ called the placenta. The placenta helps the fetus when it grows inside the mother’s uterus.

Do giant pandas have pouches?

No, giant pandas do not have pouches, as their cubs are fully matured and developed. Though they are very small in the size, their essential nutrients are complete.

The size of a newborn panda is around 90 to 130 grams, the size is pretty similar to a cat’s kitten. When they are born, they are white, blind, and helpless. The mother panda keeps the cub in the paw for several days and takes care of it.

After a few days of their birth, grey fur develops on their skin, and then white and black fur develops around their mouth. When the cubs are born they do not move in their habitat for two months, but in the third month, the newborn panda begins to crawl. Therefore, giant pandas are characterized as placental animals.

While on the other hand, if we talk about marsupial mammals, they require pouches as their babies are immature. After their birth, they live in their mother’s pouches for months to take the essential nutrients. So when they get fully developed they jump out of the pouch and survive in the atmosphere.

Marsupials, like Kangaroos, nourish and carry their kids in their pockets. On the other hand, placental mammals don’t need pouches because their babies don’t require extra nourishment. Red pandas, just like giant pandas do not have pouches which means they are not marsupial animals.

I hope you learned something today! Make sure to share it with your friends.