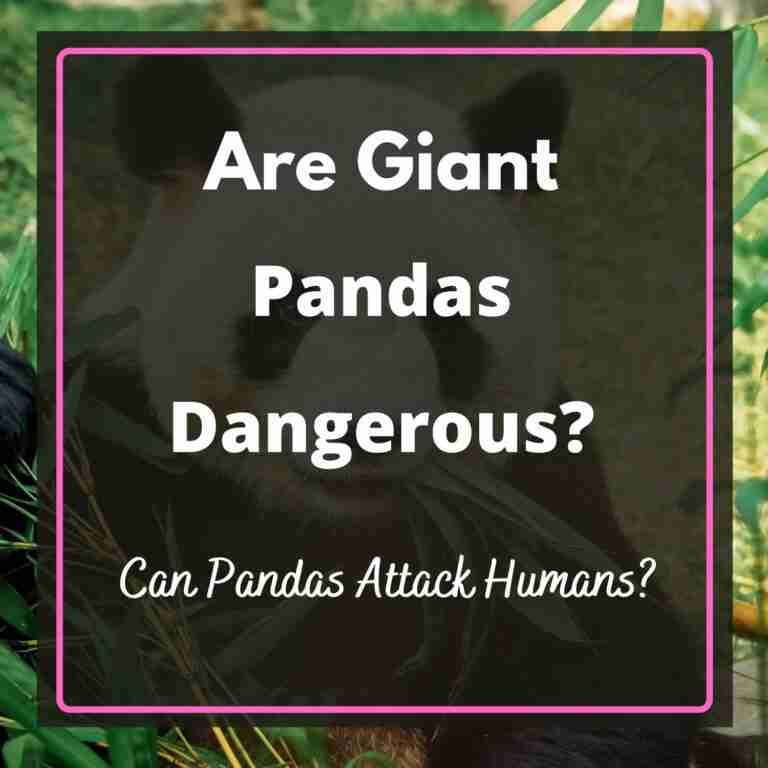 Cuddly and lovely that’s how we commonly see pandas in the animal centers or the zoo. Just like any other animals, pandas came or originated from the wild and they are part of the bear family. So, if that is the case, are giant pandas dangerous?

The quick answer would be, YES. However, every story has two sides that we should know about. After reading this article, you will know why our lovely and cuddly bears could be dangerous to humans.

Perhaps, this one is of the most commonly asked questions about pandas. But worry no more, because I am here to provide you with a clear answer to this question. Sounds good?

Let’s go ahead and find the answer to the following questions about pandas.

Why Do Giant Pandas Attack Humans?

Irritation and threat are the main reasons why a giant panda attacks humans. We are fully aware that the real nature of a panda is solitary, which means they love to be alone and they are comfortable with it. But, why those panda bears in the animal centers do not attack their human nannies? Let’s find out the answer.

Nonetheless, let’s keep in our minds that giant pandas are still wild animals with wild instincts. It means they can attack anyone once they feel they are in danger.

Moreover, it is simply a natural response to protect yourself from the enemies around you, right? The same is true with the animals like giant pandas. But, there are rare cases of pandas attacking humans for they don’t have any natural enemies.

As an addition, the giant pandas are very protective of their babies. It means they will protect them no matter what. So, if some humans try to hurt their babies, their maternal instinct will work and will attack them. The same is true with the way humans protect their young ones, right?

The giant pandas are known for being one of the cutest animals in the world. They have been loved by many people all around the globe. But, let’s keep in mind that they are still wild animals and approaching them in the wild is a big mistake.

The best answer to this question is RARELY. Throughout history, there were rare cases of reported incidents of panda attacking humans. In fact, they would not exceed the number of your fingers.

Giant pandas are known to have solitary nature. They love to be alone to the point that they stay miles away from each other and they only meet during their mating season.

From September 2006 to June 2009, there are three recorded incidents of giant panda attacks against humans. The Panda House in Beijing China presented these rare incidents to warn people of the potentially dangerous behavior of giant pandas.

Has A Giant Panda Ever Killed Anyone?

There have been no clear news or incidents where a giant panda has completely killed anyone. While they have been subjected to part of the potentially dangerous animals, there are no data that show that they have killed any human beings.

Just like what was mentioned earlier, giant pandas are wild animals. Yes, they may have turned themselves to be herbivorous animals but still, they are wild and unpredictable animals if you have pushed their buttons.

Let’s keep in mind that without expert assistance or guidance never ever approach a giant panda. Simply because you might irritate or threaten them and they might just give you the worst nightmare you have never expected to happen.

Let’s keep our boundaries. Yes, they are cute. But, the possibilities of them attacking you is so unpredictable.

Here is the article that contains sensitive content about humans who were attacked by giant pandas. Viewing this requires parental guidance for very young audiences.

Yes, giant pandas are friendly animals. In fact, you can interact with them. But only if they are under human care or they stay in animal facilities with professional panda caregivers.

While it may sound contrasting with the first question, it is real. Are you familiar with the concept of nature vs. nurture? Well, it applies the same principle to pandas.

In the wild, you cannot approach a wild panda because it might attack you. Basically, a wild panda will attack you because it is his nature to protect themselves when they feel like they are in danger. Plus, they are not used to interacting with people, and they might feel threatened by human presence.

However, it is a completely different story if we are talking about the pandas in the animal centers. Humans nurtured them. So, they are used to interacting with humans without developing any sense of threat.

The pandas in the animal centers are very fond of the nannies who take good care of them. You can also do a lot of interactions with the pandas like feeding, playing, or taking selfies or photos with them. That’s how friendly a panda could be if nurtured by humans.

How Deadly Are Panda Bears ?

Panda Bears, also known as Giant Pandas, can be deadly for some reasons. Let’s go over them one by one.

You should never underestimate the biting power of a giant panda. They have very strong jaws and teeth that can crunch a bamboo as if they are just eating a crunchy biscuit. What more if they will bite our soft flesh, right?

Moreover, the large physique of giant pandas also includes large teeth and strong jaws. Which means, they possess powerful jaws that are equipped with thick and heavy muscles on the top of their skulls. They also have the sagittal crest, which gives them incredible jaw strength.

You can check this article that talks about a detailed explanation of how strong panda jaws could be.

Their paws may be soft and lovely to touch when they are baby, but definitely not when they are fully-grown. They definitely have sharp paws that can rip your skin and flesh like Wolverine. So, if you have irritated a panda, get ready to face a lot of scratches and bloody cuts.

Furthermore, the giant pandas are part of the bear family. The bears like grizzly and polar bears are known for their strong biting power and sharp claws or paws. The danger that their sharp paws may cause is off the chart.

Those are enough reasons to consider a panda dangerous. And that is why it is highly prohibited to approach a panda in the wild.

On the other hand, pandas that grew up in animal centers are not that dangerous. Just like what was mentioned earlier about the concept of NATURE and NURTURE, the creature’s behavior depends on his environment.

Here are some of the most frequently asked questions about giant pandas. We already provided you relevant answers. Sounds great? Let’s go over them one by one.

Yes, giant pandas do bite. They have strong jaws and teeth to bite and crush bamboo. So, they definitely bite.

But do pandas bite humans? In history, there are few recorded incidents about it. Just like what was mentioned, if they feel threatened, they might attack you as their natural reaction to what they consider as danger.

Nonetheless, pandas are herbivores so the fear that they will bite because they want to eat you is far from reality. They rather stay in the forest and eat as much bamboo as they want than eat humans.

Can You Pet A Panda?

You cannot pet a panda. Here is the main reason why you simply can’t do it.

“Pandas are not pets and they are not for sale.”

No matter how much money you have, you cannot buy a giant panda. All of them are properties of China. Buying them would be against the law of China.

Moreover, if there are people who are offering you to have a panda as your pet, do not accept it. That is definitely a scam, and you should report it because it is illegal.

On the other hand, you can rent them. You just have to pay $1,000,000 every year. Plus, you should have a qualified facility and a massive amount of bamboo food supply that would cost you 0,000 a year. To know more about the true cost of a panda read this article.

Can I Adopt A Panda?

Yes! You can actually apply for adoption. You may be asking HOW, right? If they are not for sale how come they are open for adoption?

This instance is called symbolic adoption. It is where you can apply for adoption but you cannot really have them physically at home. They will stay in China under the care of panda experts.

It’s more likely a donation drive wherein you are given recognition as the adoptive parents of the pandas in China.

Does that mean you can’t really see or touch them? Well, you can. If you go to China. But the interaction you will have with the pandas depends on the level of adoption you applied for.

The higher the level is the more interaction you would have.

If you would ask me, I suggest that you buy the best panda stuffed animals online instead. You can have it all you want, with no restrictions at all. Even if you want to hug it while you sleep, there will be no trouble at all.

To know the best panda stuff animals that you can buy online you can check this article. And if you need help in naming your new pet, I have here a solution for you. It is a list of cute to unique names for your panda stuffed pet.

To know the best panda stuff animals that you can buy online you can check this article. And if you need help in naming your new pet, I have here a solution for you. It is a list of cute to unique names for your panda stuffed animals.

In this article, you learned that pandas can be dangerous to humans. You also have learned that it is not advisable to approach them in the wild. Moreover, you found out that they can never be a pet.

Domesticated animals stay with humans in their daily living. It includes the dogs and cats that are usually found at home. These animals are meant to live with humans, unlike the other animals like lions and more.

On the other hand, even if they go along with humans there are still incidents where they attack people. What more for the wild animals like pandas that always want to be alone, right?

Even humans would attack other humans if they feel like they are in danger. So the nature of attacking others to protect oneself is quite normal and very evident to all living creatures.

So if you will ask me for the last time if pandas are dangerous, I will say NO. They want to live peacefully in nature. Let’s respect each other’s territory to avoid any form of danger.

What do you think of this article? Did it answer your questions? Don’t forget to share it with your friends.