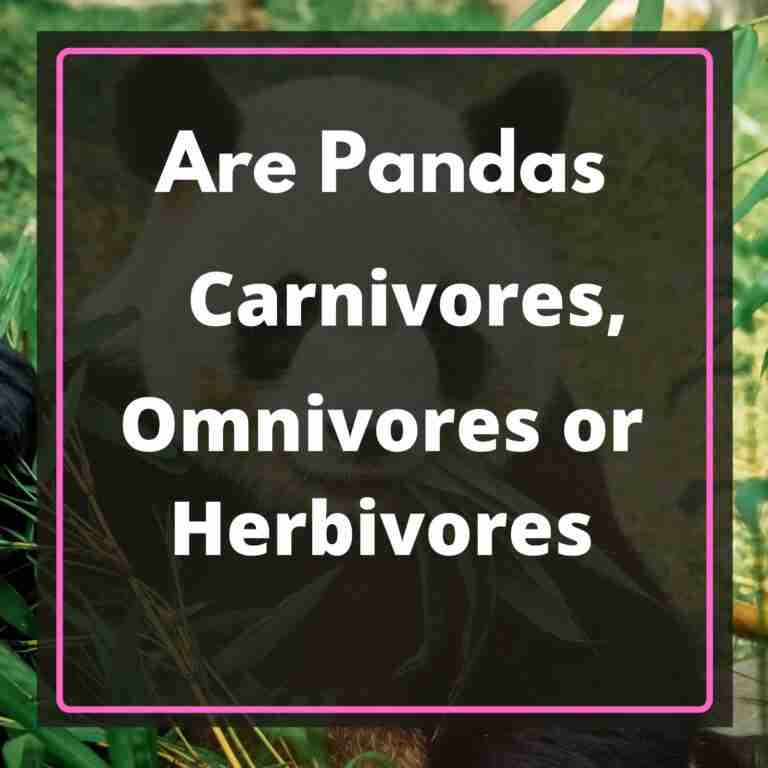 Giant Pandas eat bamboos all the time – which is enough evidence to support the fact that they are herbivores. However, did you know that they can eat meat too?

That being said, are panda bears really herbivores, carnivores or omnivores?

Here is the quick answer – pandas are still considered herbivores because they mainly feed on bamboo stalks and leaves.

For starters, it can be confusing. How are they herbivores if they can eat meat?There is a whole background story behind giant pandas possessing many characteristics of carnivorous animals and still ending up herbivorous.

So, without any further, let’s move to the part where we answer them!

Why is a Giant Panda Considered an Herbivore?

Giant pandas are considered herbivores because of the fact that they solely feed on bamboo. Physiologically, they are carnivorous, with their bodies having the ability to digest meat.

However, specific evolutionary incidences made them herbivorous.

This confusion often leads to the question if giant pandas are carnivores, herbivores, or omnivores?

It’s true, that’s a fair question. It’s super confusing to have giant panda’s physiology and anatomy resembling those of carnivores – with their nutrition confined to nothing more than bamboo stalks.

Keeping giant panda’s diet in mind, we tend to call and consider them herbivores. However, if they ever eat meat (that they do once in a while), they can digest it as well.

According to many researchers, the giant pandas used to be carnivores in the beginning. However, with the passage of time, their peaceful nature made them adapt to this change.

Because of the high competition between carnivorous animals, the giant panda bears shifted their mode of nutrition to bamboos.

Since they are generally peace-loving animals, they could not stand the idea of fighting with other carnivorous animals.

What is the Difference Between Carnivore, Herbivore, and Omnivore?

We have been talking about the question that are giant pandas carnivores, herbivores, or omnivores? But do we even know what that means?

Generally speaking, animals that feed on other animals by preying on them are known as carnivores.

They possess sharp teeth and keen senses for efficient hunting. The metabolic systems of such animals are adapted to digest a high amount of protein that is present in their diet.

Examples of carnivorous animals are as follows:

On the other hand, herbivores are animals that feed on plants or herbs. These animals have blunt teeth that have a large surface area to help them chew their food properly.

Moreover, they can usually digest vegetables and plant-based diets more efficiently than a high protein diet.

Typical examples of herbivorous animals include the following:

Omnivores are those animals that feed on plants, animals, algae, and fungi.

They range from small animals such as insects to larger ones, including humans. What makes omnivorous animals different is the fact that they have metabolic systems adapted to digest both high protein and high fiber diets. In this way, they can feed on both types quite easily.

Some of the examples of omnivorous animals include:

What do Pandas Eat Besides Bamboo?

Giant pandas are very low-maintenance animals. They do not have any specific dietary requirements. Although they love to eat bamboo, and 90% of their diet comprises bamboo leaves and stalks, they will practically eat many other fruits, vegetables, and even cakes and puddings as well!

So, the question that are giant pandas carnivores, omnivores, or herbivores will be answered by considering things that they usually eat. Some of the fruits that giant pandas eat include the following:

Speaking of vegetables, you will find a lot of giant pandas eating vegetables such as:

Occasionally, they will eat small animals such as fish, squirrels, lizards, and rats as well. They do not quite like the idea of hunting, but they can hunt small animals if they ever need to.

Well, that means they would happily eat cakes, puddings, and many other sweet dishes! Isn’t it cute?

Metabolically and physiologically, giant pandas can definitely eat meat. Although the answer to the famous question “are giant pandas carnivores, herbivores or omnivores?” is “herbivores,” it doesn’t mean that they cannot eat meat.

Giant pandas can eat and digest meat because of the presence of Clostridium in their gut or digestive system. However, they prefer not to. Once in a while, you will come across giant pandas getting their hands dirty of small animals to fulfill their nutritional (protein) requirements.

What Kind of Meat Do Pandas Eat?

Giant pandas can eat any type of meat they want. However, in times of emergency or need, they mostly eat small animals or insects. This is because they only attempt to hunt small insects such as lizards or rats.

It is their personal choice to skip the meat and prefer bamboo over it. However, it has nothing to do with their physiological and anatomical structures.

They still possess the teeth and metabolic systems to feed and digest meat. Therefore, if you give them the meat of small or large animals or even anything made from it, they will not only eat it but will digest it as well.

The very straight answer to this is a big no! Giant pandas are very peaceful and affectionate animals.

They keep themselves away from any activity that involves danger. This is the very obvious reason why they switched their carnivorous lifestyle to a herbivorous one.

Giant pandas are quite lazy and slow animals because of their diet confined to bamboo. They prefer to spend time in solitude under the shady trees and rarely attack any animal, let alone human beings.

However, some people tend to irritate them. Once provoked, like any other animal, they’d react to attack.

Why Did Pandas Stop Eating Meat?

There are quite a few reasons why giant pandas moved to a herbivorous lifestyle and quit meat.

According to researchers, the pseudogenes of the taste receptors Tas1r1 in giant pandas decreased their reliance on meat. This is because they can’t get the same taste of meat anymore.

Therefore, the attraction for it decreased with time. Now they find bamboo tastier and love to rely mostly on it.

Speaking of the behavioral lifestyle, there is another reason. Since giant pandas are amicable and do not want to get in any type of predator-prey activity, the hunt for animals did not suit their nature.

Therefore, instead of fighting fierce animals like Lions or Tigers, they sufficed on bamboo shoots and leaves.

Slowly, their reliance on bamboo increased, and they switched themselves to a more vegetarian lifestyle.

Today we have learned that giant pandas are classified as herbivorous because they mainly rely on bamboo shoots and leaves to meet their nutritional requirements.

However, giant pandas are very kind and affectionate. They would love a nice gentle cuddle and would happily spend time alone under a shady tree.

Giant Pandas love to eat a lot of Bamboo, and that’s the reason why you’d mostly find them sitting between lots of bamboo stalks and leaves. Well, that certainly makes them more loveable!

If you have a thirst for learning and knowing more about giant pandas, you must visit our blogs.

We update about our favorite animal because there still a lot more to know about these cuddle bears!