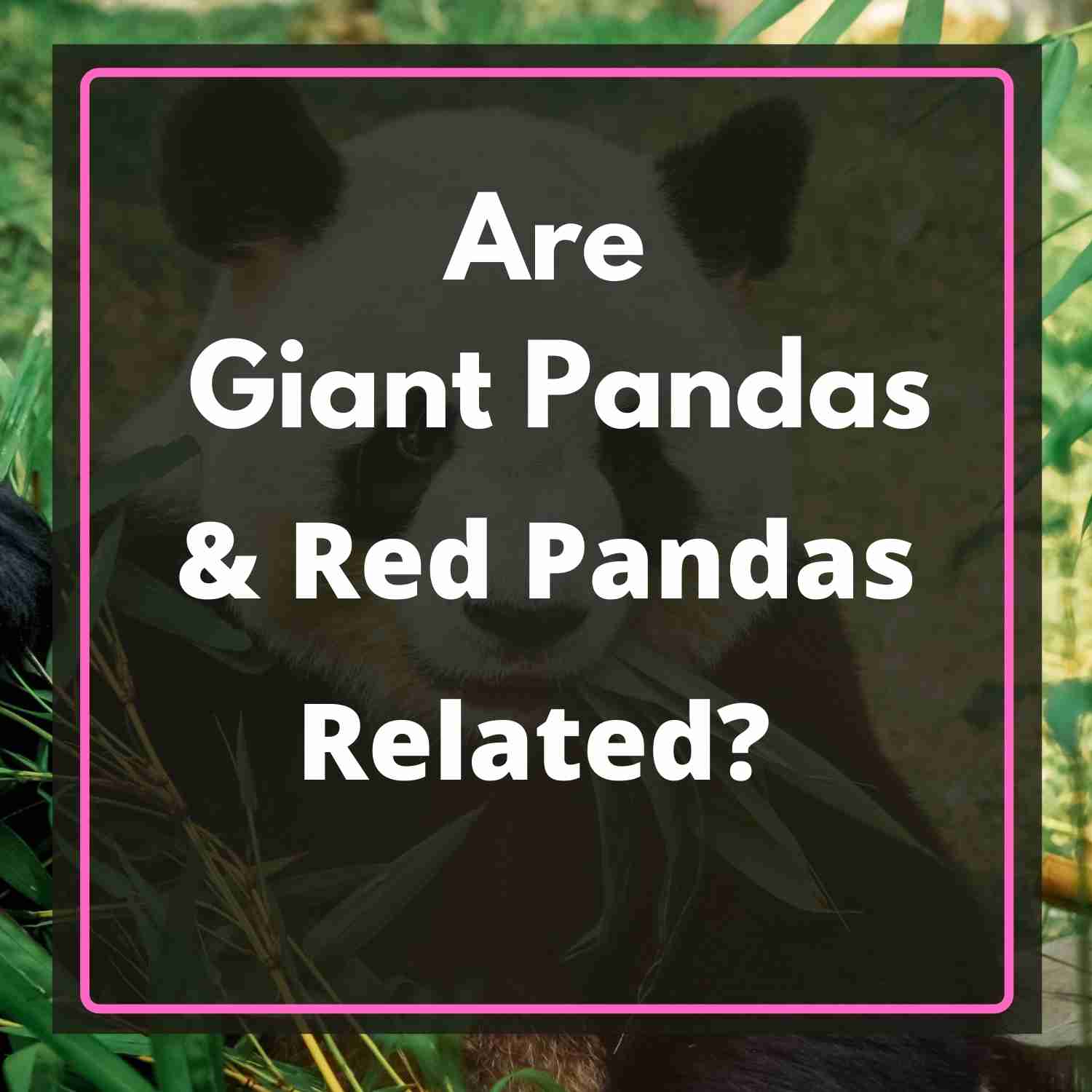 No, they are not. In case you don’t know, giant pandas and red pandas are not closely related. Yes, they share some similarities like their names, food, and habitat. At a point, I also thought the two animals were of the same species until I gained more information.

Don’t worry, I’ll give you 5 reasons to support this claim. Just follow through with this article to the end to gain a better understanding of why giant pandas and red pandas are not related.

5 Reasons Giant Pandas and Red Pandas are Not Closely Related

Here are the main reasons why giant pandas and red pandas are not directly related.

The scientific name of the giant panda is Ailuropoda melanoleuca.

On the other hand, the red panda belongs to the Ailuridae family. Initially, they were believed to be among the raccoon and bear family. Further research revealed an opposite result. The scientific name of the red panda is Ailurus fulgens.

For a start, this is one major reason giant pandas and red pandas are not closely related. Let’s move on to the other reasons.

About the weight of the two animals, giant pandas can be considered huge compared to red pandas. When placed beside each other, a giant panda will weigh close to 300 pounds and reach 6 feet in length.

Funnily, a red panda will only weigh close to 13 pounds and reach 25 feet in length. This can be compared to placing a dog beside a mouse; the difference between their body size is unbelievably too much!

At age 4 to 6, giant pandas are sexually matured and ready for reproduction. Unfortunately, they don’t give birth as much as they should, which is making them go into extinction. However, their mating period is between March and May.

By the  95 to 165 days of pregnancy (3months to 5 and a half months), the mother panda delivers her two cubs but only takes care of one since she produces little milk.

January to March is the mating season of the red pandas. They become sexually mature from 1 year and 6 months to 3 years.

But unlike the giant panda, the red panda pregnancy lasts for 112 to 158 days (3 months to 5 months). Surprisingly, the mother red panda gives birth to one to four cubs.

What Is the Giant Panda’s Closest Relative?

Studies have shown that giant pandas are closely related to bears. At first, you may conclude that the giant pandas’ relatives are the red pandas, but this is false.

In 1869, Armand David, a French missionary, described the giant panda as a bear due to its appearance. Scientists in Europe also experimented  on the giant panda’s skeleton in 1870.  They agreed that the giant pandas looked exactly like the red pandas than the raccoons.

To date, biologists are still trying to figure out the relationship between the two animals.

Another research using molecular biology enabled scientists to determine the relationship between pandas, raccoons and bears. Finally, the results showed that giant pandas are related to bears.

What is the Red Panda’s Closest Relative?

Further studies have shown that the red panda belongs to a unique family of its own. This means that contrary to a former opinion about being a relative of raccoons and bears, the red pandas don’t have relatives except themselves. No one knows if future studies will come up with another explanation.

Here are some of the most interesting questions you might want to know too.

Do Giant Pandas and Red Pandas Get Along?

You may have wondered if giant pandas and red pandas play together in the wild. The quick answer is No, the two mammals do not get along.

But why is it difficult for these two animals to relate like goats and sheep? Here’s why.

As you know, giant pandas and red pandas derive pleasure in eating bamboo and even share the same habitat. However, a study published in Biology Letters revealed that if two species share the same resources, they can’t live in the same place.

This is impossible because there will be too much competition and there’s no limit to what can happen from this scenario.

So, nature provided a way to prevent the two animals from attacking one another since they live in the same environment.

When you take a close look at a giant panda feeding on bamboo, it is consuming the trunks and stems. And red Pandas feed on bamboo leaves and fruits.

Even though they don’t get along, the two adorable creatures don’t attack one another.

Another reason giant pandas and red pandas don’t get along is that they are both solitary animals. Most of the time, they both spend their days resting in trees and can be described as loners.

What Do Red Pandas and Giant Pandas Have In Common?

Even though giant pandas and red pandas are not closely related, it doesn’t mean they don’t share similar features.

Here are their similarities;

Both animals live a solitary lifestyle. Except for breeding purposes, giant pandas and red pandas prefer to spend all day on trees. They rarely play with one another unlike other animals and can be considered loners.

Furthermore, they don’t engage in activities that use energy. Maybe because of their diet that contains little to no nutritional value, who knows?

And they both eat a lot of bamboo every day. They spend most of their life eating bamboo, which is strange.

They both have opposable wrist digits that allow grabbing and holding bamboo leaves and stems. Also, both pandas climb trees easily with their unique digits. Not all animals have this ability.

In this article, we learned 5 reasons giant pandas and red pandas are not closely related. We mentioned that they are not related in terms of family, body size, reproduction, diet and lifespan.

Also, we talked about the giant pandas’ closest relatives, which are the bears while the red pandas have no close relatives.

Furthermore, we discussed why giant pandas and red pandas don’t get along which is because of their solitary nature and to avoid competition.

Finally, we discussed the similarities between the two cute creatures.