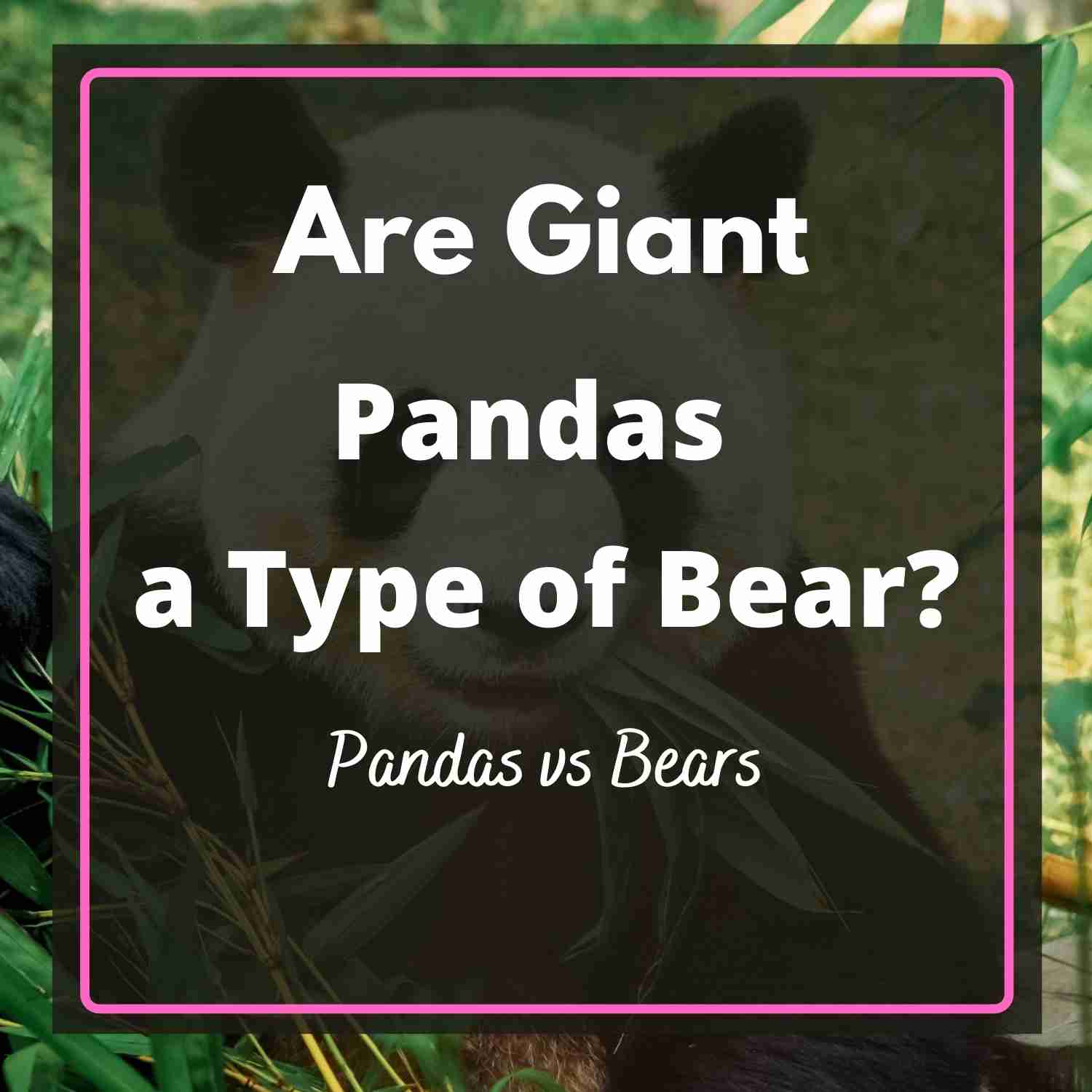 Undoubtedly, Giant Pandas do share similar characteristics with bears. With similar ears to the facial structure, Giant Pandas and bears might as well be cute siblings. But the question is are giant pandas bears?

But, here is where the twist comes in: ONLY giant pandas are characterized in the Ursidae family, not red pandas.

So, it is important to understand that not all pandas are a type of bear; only the giant panda species is.

Moving on, we would dive deeper into the differences and similarities between pandas and bears, along with some exciting Frequently Asked Questions (FAQs). Rest assured, you are in for a cute intellectual panda ride!

What is the Difference Between a Panda and a Bear?

A panda can climb trees, whereas bears cannot. This makes pandas great climbers!

Pandas tend to have a digestive system similar to that of carnivores. Due to the scarcity of meat, bears tend to eat other food such as berries, human-cooked food, and fruits when there is no meat.

Pandas don’t tend to do the same; they just eat Bamboos, no matter what. It is safe to say they are picky eaters! Bamboos make giant pandas happy; it’s that simple!

Pandas don’t hibernate, while bears do. There is a simple reason behind that: the difference in their diets.

Bears are active, and they move around to find suitable and healthy food options. Pandas, on the other hand, are lazy and will be happy to just sit around a steady supply of Bamboos for hours.

As a result, Bamboos do not really provide sufficient nourishment, specifically in terms of body fat, for Pandas to hibernate throughout the winters.

Bears have a diversified color range, from back furs to blond, brown, and even red. Despite “yes” to a question like are giant pandas bears, pandas are different. They have a pretty standard color of black and white, with no variation whatsoever.

SURPRISE! Giant pandas have 6 fingers, not 5! It has an extra thumb, unlike the bears. This helps pandas hold on to the stalks of bamboos easily.

What are the Similarities Between a Panda and a Bear?

Both Belong to Same Family

Both pandas and bears belong to the same family known as the Ursidae family, comprising of 8 animals. Amongst the 8, 7 of them are bears, and 1 of them is giant pandas.

Both pandas and bears are affectionate. They care a lot about their loved ones and family members.

The pandas and bears have a very enhanced sense of hearing to sense any upcoming danger. In this way, they locate each other and save themselves from any predator attacks.

Both pandas and bears possess a short tail, upright ears, and claws. Hence, many anatomical features of both members of the Ursidae family are the same.

Don’t Have Pouches for Their Babies

Both pandas and bears do not have marsupium or pouches to carry their children around. Therefore, their babies are born outside their bodies, and they take care of them outside the bodies.

Although we answer “are giant pandas bears,” with a yes, there is still a lot in which they differ from each other!

Do Giant Pandas and Bears Live Together?

Moreover, the bears can live and thrive in a diverse range of habitats. They mostly prefer areas away from human habitation. They also live in elevated and other ecosystems such as plains, tundra, coastal estuaries, mountains, forests, islands, and prairies, etc.

On the other hand, giant pandas only survive in habitats with plenty of bamboo trees. In addition to this, the bamboo must come from more than one species. They can live in mountainous regions or valleys provided that there is sufficient bamboo present around.

Is a Giant Panda a True Bear or a Racoon?

Giant Panda is a true bear, whereas a red panda more closely resembles a raccoon. For many decades, the debate on taxonomic classification had been under consideration.

However, the molecular studies finally suggested the answer to are giant pandas bears with a very clear “yes.”

What Family Does a Panda Belong to?

That is why we say it is important to realize the fact about are giant pandas bears – that they are. However, red pandas are not bears; instead, they are more similar to raccoons.

Can Pandas Mate with Other Bears?

Giant panda breeding is not an easy thing. Therefore, there are very few chances of them producing hybrids after breeding with other bears.

In this article, we have learned about are giant pandas bears, and they most certainly are! Although all pandas are not bears, if we specifically talk about giant pandas, they are.

However, there are still many nutritional, physiological, and anatomical differences between the two.

Giant pandas and bears belong to the same family, but this does not make them able to mate or live with each other.  To learn more interesting facts about cute cuddle partners, regularly read our blog section!